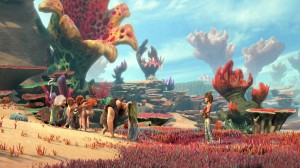 We didn’t get much out of that short partnership between Dreamworks Animation and British claymation studio, Aardman Animations. After that brief time concluded, a concept pitched by John Cleese (yes, that John Cleese, of Monty Python fame) was left to be kicked around Dreamworks Animation, about a prehistoric comedy revolving around a family of eccentric cavemen. Waiting in the wings as more high-profile franchises like Shrek, Madagascar and Kung Fu Panda monopolized the studio’s attention in the meantime, The Croods, originally titled Crood Awakening at the time, bided its time for the remainder of the 2000s.

Just as the prior decade was ending and a new one was beginning back in 2010 however, animation director, Chris Sanders made a smash hit movie for the studio, both critically and commercially, in 2010, that being How To Train Your Dragon. Since work on both movie and big screen follow-ups to How To Train Your Dragon are being met with delays and lengthened production schedules, Sanders has since kept busy in the meantime realizing that leftover concept bequeathed by Aardman, which was eventually developed into the recent family-centric big screen release, The Croods. 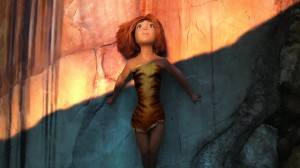 While it underwent hefty rewrites and a title change from the original Crood Awakening moniker, the premise of The Croods remains true to its original concept in setting, premise and lead characters. The movie is about the titular Crood family of cavemen, consisting of worrying father, Grug, doting mother, Ugga, rebellious teenager, Eep, disagreeable grandmother, Gran, dopey young son, Thunk, and animalistic infant, Sandy. The family has survived by hiding from danger and spending most of their time safe in caves, as displayed by a humourous montage of what happened to the other caveman families during the movie’s opening exposition. When continental drift starts tearing apart the land they’ve come to know however, the family is forced on a journey to seek safety, assisted by the first so-called ‘modern man’, Guy, and his pet sloth, Belt.

Releasing The Croods around the Easter season was a smart move by 20th Century Fox, who is the new partner studio of Dreamworks Animation after the original deal with Paramount expired late last year. The movie is candid from the get-go about the fact that it’s an experience clearly meant to be viewed by the whole family, obviously brought together in many cases by the Easter calendar. Even the most mismatched of families will find plenty to like as well, since each Crood family member is wonderfully distinct and memorable for their own reasons. Kids will also get plenty of chuckles out of Guy and Belt, the latter of whom owns one of the movie’s best running gags, with his tendency to cutely say, “Dun, dun, DUN!” at just the right moments. 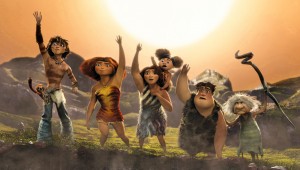 Not only are the Croods’ personalities well-defined, but they also do something you rarely see in modern family movies; They deliver slapstick comedy that actually works, and will be amusing even to adults. The slapstick scenes are clever in setup, but they also take advantage of the more exaggerated and blocky designs of the Croods themselves, who feel like classic 2D cartoon art come to surprisingly effective CG life. This is nicely complemented by Guy, a more proportionate-looking human, and more in line with how Dreamworks Animation usually renders their regular human characters, capturing well the fact that he’s clearly distinct in background and style from the Croods.

Don’t think that it’s just the Croods smacking each other around that will get laughs though! The movie also has a very sharp and cleverly-written script with plenty of highlight dialogue exchanged between the characters. What’s even better is that the movie almost never relies on pop culture references, which will likely help it hold up in the long-term among Dreamworks Animation’s other highlight films!

If anything is going to impress in The Croods beyond the humour however, it’s the visuals. As expected from a Dreamworks Animation movie, this is a breathtaking visual spectacle that is a real joy to look at! The movie is full of colourful environments, extremely creative and exotic creature designs, and several genuinely enchanting atmospheric moments that help the audience share the journey of discovery that the Croods undertake throughout the runtime. Some of the later action sequences and environmental renderings are among the most ambitious animated sequences that Dreamworks Animation has ever attempted to date, and it all looks incredible! As with most Dreamworks Animation movies, you’ll definitely want to watch this movie in 3D, since it brings with it a superb 3D presentation that is fun, engrossing and seamless, without feeling gimmicky or forced. The Croods still looks very sharp in 2D, but it’s really at its best when viewed in 3D!

Another thing that’s practically a given in any Dreamworks Animation movie is a strong cast bringing the characters to life, and The Croods delivers as expected here as well. Nicolas Cage is well-cast in the role of Grug, getting some nice quirky dialogue and action moments that take good advantage of his offbeat talent. Likewise, Emma Stone brings an incredible sense of upbeat charm to the rebellious Eep, helping to elevate Ryan Reynolds voicing Guy, who isn’t given quite as much room to stretch in what’s essentially a ‘straight man’ role. Cloris Leachman is also a hoot as Gran, particularly when she gets to play off Cage, who will likely be the highlight of the cast to many viewers.

On this note, The Croods doesn’t quite find its narrative footing until the second half, when Grug starts to take over the spot of the lead character. In the early portions of the movie, The Croods seems to begin as a story about Eep, not Grug, with Eep filling the protagonist role initially as she tries to discover the world she’s not allowed to explore. By the halfway point or so however, the movie is more about Grug, who is meant to learn the lesson of letting his guard down and having a sense of adventure, and this is where the movie’s emotional core starts to better come into play. The apparent shift in lead characters is no doubt a side effect of the movie’s lengthy and shuffled production cycle, but thankfully, it doesn’t feel too stitched together in the end, and the plot still flows with a reasonable degree of smoothness. Yes, it’s still true that these themes and this plot have been done in other animated movies to a degree. The Croods borrows story inspiration not only from Fox’s previous Ice Age movies, but also from Pixar’s Finding Nemo most notably.

Thankfully, the movie never comes off as feeling stale despite this. It’s full of imaginative set pieces and clever dialogue, and is jam-packed with exciting and fast-paced cartoony action sequences to keep things interesting as well. Actually, the pace of the movie is quite breathless at times to be honest! It doesn’t overstay its welcome in runtime because of this, but considering the high frequency of these speedy action segments, some older viewers may feel like the movie needs to slow down in a few spots. Young kids however will definitely delight in the hyperactive pace of some of these scenes, particularly when the Croods demonstrate their ensemble hunting abilities. Thankfully, The Croods doesn’t forget to have a quieter emotional scene every now and again too, which will help the audience to stay invested in the quest and motivations of its titular characters.

The Croods may not be the lightning-in-a-bottle instant classic that How To Train Your Dragon was in the end, but it’s still a very strong family movie and animated movie in equal parts, one that stands among Dreamworks Animation’s better offerings, and thankfully isn‘t betrayed by its somewhat turbulent production cycle. Viewers of all audiences and age groups will find several things to like throughout the movie, particularly if they already have a taste for animated filmmaking, and particularly if they enjoy seeing movies in 3D, which is definitely the best way to experience The Croods! While it may not stand with the top classics in the Dreamworks Animation catalogue, it’s a sharp crowd-pleaser that’s very eye-catching and very entertaining, being as much fun to laugh at as it is to look at.

It’s great to see that the art of making a true family film isn’t yet extinct!