It’s just a few weeks until the launch of Injustice: Gods Among Us, but that hasn’t made us any more patient for information on the game from NetherRealm Studios. Information on upcoming DLCs Blackest Night and Red Son and the completed character roster have given us a taste of what’s to come, but it hasn’t been enough for us to really know what this game has to offer. However, that’s why we were thankful that a demo was released this week for us to bite into, and we did, indeed, bite right into it.

Casting aside the loading screen and obligatory demo video, the demo gave players a piece of superhero action of their own. Injustice’s demo offers two game modes for players, single player battle, where you go through a series of 4 battles (against Wonder Woman, Batman, Lex Luthor, and Doomsday), all in Gotham City, and versus mode for multiplayer where you can play a friend. You’re only allowed three playable characters in the demo: Wonder Woman, Batman, and Lex Luthor. We’re not ashamed to admit that we poured ten hours of game time into this demo in the very first day we downloaded it. Mind you, after every match of single player, the game makes you watch its trailer. That’s dedication, and what we got from it was an amazing experience. 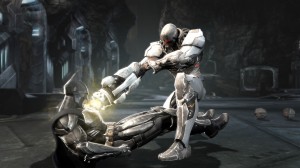 Combat in Injustice is dynamic, but that doesn’t do it justice. Every punch, kick, throw, and superpowered move feels heavy and visceral. When fighting as Batman, you feel the years of ninja training he went through, and that his moves are tailored to evade and conquer through combination attacks. Opposing that, Lex Luthor feels clunky and heavy in his giant mecha suit, but all his attacks feel the weight behind them. Originally when we saw the trailer for Injustice, we quipped that the environments look like they were given a coat of super bouncy Aperture Science repulsion gel; however, having now played the game, we feel as if the bounciness of the levels is not a distraction from the gameplay, nor is it comical. The interactive nature of the environments lend heavily to the power of each superheroes blows, and that’s what we loved about it. Crushing Batman underneath the Bat Signal as a zeppelin explodes in the background is one of those action movie moments where cool people don’t look at explosions, but it feels awesome.

We also got a peek, but no playtime with, the other modes that will be feature in Injustice. Star Lab missions will be very much like the mission mode found in games like Super Smash Bros. Brawl, where you complete mini games for unlockables, experience, and maybe a secret character or two. Online multiplayer, a fixture these days, will have a King of the Hill mode where players place bets on who will win a fight, the reigning king of the ring, or the newcomer. We definitely can’t forget the story mode, especially since the premise has been released to the public. With the Joker being the forefront of anarchy, he destroys Metropolis and tricks Superman to kills Lois Lane and their unborn child. This send the Boy in Blue in a furious campaign to bring justice to the world, and he begins a tyrannical regime to the world. Batman, and some unlikely allies, join forces as part of the resistance to take down Superman. Any battle that features Batman versus Superman has got us excited enough to put on our own pair of super tights and go into battle. Injustice: Gods Among Us comes out on April 17, and we can’t wait to play the full thing. 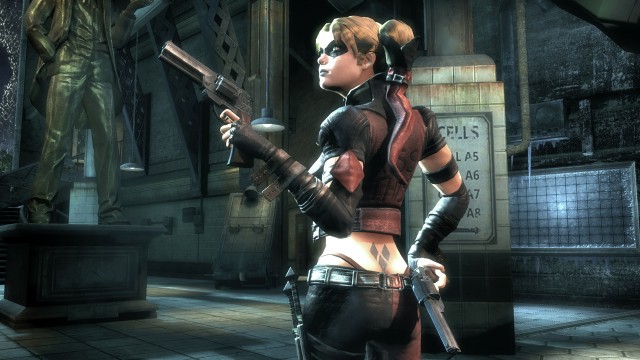