Japanese RPGs are, by far, my retro game genre of choice.  Reflecting back, I couldn’t have grown up at a better time, a time when JRPGs were the popular topic and offered some of the most gripping, emotional experiences in gaming.  Things have changed a lot since that time, and while there are still some amazing experiences out there, the genre isn’t really trending the way it used to.  Because of that, I spend a lot of time reminiscing over the history of this genre and replaying past glories. Oddly enough, my experience never change no matter how many years pass.

To be honest, I’m not sure why I’ve decided to start with Dragon Warrior 3 in particular, but it was a game that really affected me growing up and took some interesting leaps in the genre. DW3 completes the trilogy of Erdrick’s lineage, pitting you against the Demon Lord Baramos.  It’s up to you and some carefully selected companions to banish the evil and return your land back to its former self.

By today’s standards, DW3 isn’t the most memorable.  Since each character is a blank slate and totally customizable, there’s a certain something missing from the experience (much like how I felt playing Dragon Quest IX).  For a JRPG of this caliber, it’s almost better to offer predetermined characters living meaningfully in their world.

The gameplay, on the other hand, is probably one of the finest, most accessible examples.  Compared to the first two installments in the trilogy, which featured heavy level building, DW3 never strays too far down that path, yet offers everything you could ever enjoy from a turn-based menu-heavy game.

The one good part about having fully customizable characters is the plethora of equipment and accessories.  Each character, besides your hero, can choose to be one of several classes including Hero, Soldier, Fighter, Merchant, Pilgrim, Wizard, Goof-Off and the desirable Sage.  With that in mind, I think you can imagine the equipment possibilities. 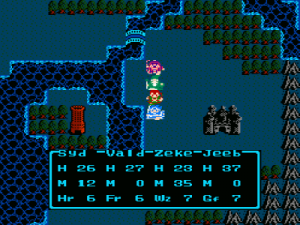 That said, you can expect plenty of replay value as there are endless character combinations out there for you to experiment with. Exciting, yes, but at the cost of story development.  I’m very partial to a good story so while I love the game, my adventure always feels somewhat incomplete.

On the other hand, DW3 offers a much more polished experience.  For one, the NPCs are actually useful this time around and don’t wander around aimlessly or offer bland, unhelpful dialogue.  I felt more inclined to want to get to know the people of each locale and be a part of their world.

Another feature that’s been improved upon is the character and monster designs.  They weren’t leaps and bounds better, but they provided that extra something to keep me invigorated to play more.

DW3 is nothing groundbreaking, but the experience is much more accessible and polished in both gameplay and design. This game did, however, take the risk of offering completely customizable characters, and while it offered plenty of replay value and gameplay possibilties, it didn’t serve well as a conclusion to the trilogy.

While DW4 really upped the ante with the active-time battle system, multiple party system and much more, DW3 finished off the trilogy in a fresh way, and improved on the series’ faults.  It might seam meager in comparison, but there’s something to be said about a game that’s willing to take a risks while making practical improvements.