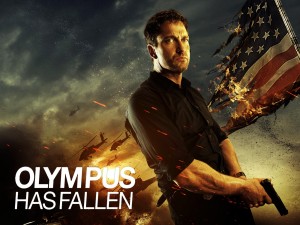 It’s Die Hard in the White House! Yes, the pitch behind Olympus has Fallen isn’t exactly rocket science, but considering the lacklustre reception of February’s actual latest Die Hard sequel, A Good Day to Die Hard, action movie fans have had their focus firmly glued on Olympus has Fallen to hopefully redeem the legacy of Bruce Willis’s action opus. Sure, as you can imagine, the movie isn’t all that original, and is rather frequently preposterous with its outlandish story elements. With that said however, it still gets the fundamentals of the genre right, being full of so much ass-kicking and destruction, even if some of that “God Bless America!” aftertaste is kind of lost on us, since we’re a site full of Canadians. When it comes down to it though, Olympus has Fallen is a worthy action movie, which also happens to be the best movie that Gerard Butler has starred in since 2007’s landmark 300, for whatever that’s worth. It’s well worth seeking out for those craving a good, if somewhat disposable action flick.

Olympus begins with a somewhat contrived intro where lead secret service agent, Mike Banning (Butler) is demoted from his position after failing to save the First Lady from a tragic (but still contrived) car accident. Now working for the treasury, Banning has largely neglected his friendship with U.S. president, Benjamin Asher (played by The Dark Knight’s Aaron Eckhart), on account of being a persistent reminder of the night Asher’s wife died. Of course, circumstance will give Banning a chance at redemption when the White House is taken over by North Korean terrorists. Yes, North Koreans. No, it doesn’t make a whole lot of sense why North Koreans would take over the White House (and it makes even less sense that they could do it in barely an afternoon), but when Russians are too dated, Middle Easterners are too obvious, and Europeans would make it a little too blatant that this is a Die Hard clone, North Koreans are your backup option.

In fact, on this note, our first advice for you would be to suspend your disbelief when watching Olympus. The many outlandish and contrived turns in the story make it a movie that one could very easily pick apart, even with barely any knowledge of politics or military tactics. If you were hoping for a chillingly realistic portrayal of a terrorist takeover in America’s center of government, this really isn’t it. On that note, no, you probably shouldn’t hold your breath for infamous disaster schlock director, Roland Emmerich to come any closer later this year with his highly similar White House Down. Chances are, if you’re watching a movie like this, you’re doing it for two reasons; Wanton ass-kicking, and swift American justice.

If you’re not American, the latter will immediately be a wasted effort, but fortunately, the former is universal when it’s done right. Olympus may not aim terribly high as an action movie, but even if it sets the bar low, it doesn’t present a high risk of disappointing by that same token. If you want to see gunfights, explosions, fisticuffs and general mayhem, you’ll certainly get plenty of it! Gerard Butler racks up the same impossibly high body count that one would expect from an old-school action hero. While none of the kills are all that graphic or ostentatious, they’re always well-earned, and often executed with brutal, satisfying efficiency. The virtual representation of the White House gets torn apart nicely, and when the inevitable military action fails by action movie-mandated hubris, it leads to some nice kabooms to mix up what mainly amounts to a lot of close-quarters, highly physical action. 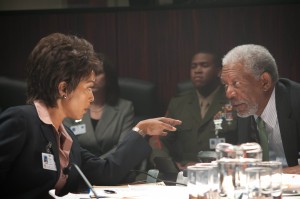 You might also no doubt be deducing however that Olympus doesn’t really throw any real curveballs during its proceedings either. This is most evident in how it doesn’t even try to be clever about the fact that it’s borrowing plot elements from Die Hard. Technology-impaired action man doing things the old-fashioned way? Check. Hero repeatedly bantering with villain over walkie-talkie? Check. Dickhead ‘superiors’ making things worse for hero because they’re too impatient to sensibly wait things out? Check. Sympathetic black guy encouraging hero? Check, and hey, it’s Morgan Freeman, which only makes it cooler this time! The filmmakers did have some restraint with the Die Hard ‘inspiration’ at least. Gerard Butler doesn’t get his feet cut up by broken glass, and he doesn’t drop C4 down an elevator shaft. He doesn’t even go into a single air duct, though he does take secret tunnels, so this only half-counts. Beyond that though, the movie does feel like a re-skinned version of John McClane going toe-to-toe with Hans Gruber in a modern setting.

To that, we say however, what’s wrong with that? Maybe Olympus isn’t original or altogether surprising, but it does work for what it is, so long as you don’t get hung up on the many asinine story elements. Frankly, it’s nice to see Gerard Butler in a decent live-action movie, more so than anything else! After misfiring pretty badly with the likes of Gamer, it’s nice to see that Butler can still be a good leading action man in the right movie, which means that his defining role in 300 doesn’t have to be a one-off success. Of course, Olympus is no 300, and certainly won’t endure the way that 300 has in pop culture. Still, this movie is the closest that Butler has currently come to recapturing that badass appeal he had as King Leonidas, especially after he nearly sank his career entirely playing leprechauns in the unspeakably awful Movie 43 from this past January. 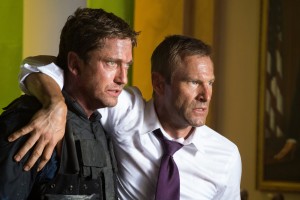 Olympus is not a complicated movie. It’s a by-the-book action movie that’s running through the Die Hard playbook rather unapologetically. It gives you exactly what you pay for, and little else. That said however, it works, and after the underwhelming A Good Day to Die Hard, it’s fair to say that Olympus is the best ‘unofficial’ Die Hard movie in recent memory, which is what much of the press has been saying about it already. To that end, we have to agree. It’s undemanding, but it works well with what little it brings to the table. If you just want to see some quality ass-kicking, you really can’t go wrong here.

Just try not to ask too many questions.