Eggplante guest contributor Jason MacIsaac was gracious enough to share an interview he did with Adam Urbano, Senior Producer on Injustice: Gods Among Us. Let him know what you think of his work by reaching out to him at www.gamejester.ca.

I’m a long-time comic book fan. The chance to work on a comic book game is huge for me.

How closely did you work with DC on Injustice?

During the story creation we worked with Jimmy Palmiotti and Justin Gray—two amazing DC writers who were our advisors to make sure we kept with canon, although we created our own universe. That gave us a lot of flexibility.

There were daily conversations with them but—and this is completely honest—they were fantastic to work with. DC let us do things I would not expect them to do. We managed to do new fighting styles, different weapons that the characters use… They encouraged us to take it as far as we wanted to, and we certainly took advantage of that.

We do have some New 52 content, the character models—there’s both Primes and  Alts and other skins—they’re custom. They just happened to be made at the same time the New 52 was designed. Unquestionably we took some influence from DC, and I think vice versa in some cases. The models are NeverRealm’s interpretations of DCU characters.

Vice versa? What do you think NeverRealm did that influenced DC?

Let’s just say the attachment point on Superman’s cape and where it fits on the New 52 [Superman]… I’m really happy that the New 52 one sort of mimicked where we wanted it to be. Giving us too much credit perhaps. I’m sure it’s total coincidence.

If you kept to canon, how is that say, Catwoman can go toe-to-toe with Superman?

I don’t want to ruin anything, but from Day 1 we were obviously thinking about how to handle that. As part of Story Mode you’ll learn why Superman can take damage, why Batman can beat Superman. It’s not magic; there is an actual real explanation. 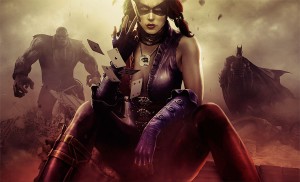 How many characters are on the roster?

It’s more than 20, the same size as Mortal Kombat.

How many moves are we getting?

Overall, the number is something like 1200 to 1400 moves. Each character has dozens and dozens of special moves, plus regular moves and combos. There’s tons of content there for those that want it.

What’s the story behind the Super Moves?

From Day 1 we didn’t want to do Fatalities. It doesn’t fit the style we wanted, and I don’t want to see Superman impaled. But we had to have these big, over-the-top moments because that’s one of the things our team does very well. So what we have instead are Super Moves.

When your meter’s full, you can do character-specific attacks and they are over-the-top and awesome. Superman punches his opponent into space. You see this shot from outer space, and then he punches you back down to Earth. Flash runs all the way around the world to build up enough strength for one really strong hit. Batman runs you over with the Batmobile… Crazy, crazy things, and we spent probably two months on each one, just getting them to be really awesome-looking moments.

What other modes do you have beside Story and Multiplayer?

One of the things we were most proud about Mortal Kombat was providing a ton of content for people. [For Injustice] Story Mode is many hours long, an epic campaign with a custom story. We have Star Labs Simulator, which is hundreds and hundreds of missions that tell a story for each character. You’ll do different things, like practising certain moves. There are some [missions] that are first person shooters, some that are like classic arcade games, some that are top-down shooters, a ton of different activities to help people have a good time. One, two or three star each of those missions for even more replayability. There are different ladders that have different themes and different things to accomplish.

You’re also levelling up your character. As you do different things your character will gain levels and you’ll unlock new things to play with. With Online we now have King of the Hill, which now features betting. You can bet on the two players playing and you’ll gain more experience. And that’s just the tip of the iceberg. 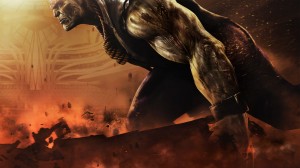 I’m an example of somebody who’s never going to be great at fighting games. I just don’t have that level of expertise and a lot of our fans don’t. What we’ve done is started out with a very nice baseline, much simpler than Mortal Kombat. There’s a Low Attack, Medium Attack, High Attack and a Character Traits button. That allows you and I to sit on the couch and beat each other up, and stuff will just look cool.

For months, we’ve been bringing in some of the top [fighting game] pros in the world. Guys that do this for a living.  [They helped] balance the game and make it something that they would like to see in a tournament.

In many cases, these are guys that don’t like Mortal Kombat. They’re Street Fighter players, or Marvel vs Capcom players. And by the end the word they used was that this game was “refreshing.” Refreshing, and something that could unquestioningly be competitive.

What sort of stages will we see, and do they have segments?

Lots of environment destruction and mayhem, I hope.

Yes. We collect stats for people. One of them is the total dollar value of damage that you’ve done. As you fight buildings will crumble, fire hydrants will go off, the whole façade of different buildings comes tumbling down. We’re really proud of the destruction. It’s dynamic, based on how you’re doing and what damage you do where.

Any plans for DLC?

Yeah, I think unquestionably we’re going to give some. We try to cram as much content on the disk as possible. That’s the team and Ed Boon’s mantra: make sure that players get huge value. But there’s obviously only so much we can do in the time we have. There are a ton of characters I’d like to include that we didn’t, and I’d like to look at those as DLC possibilities.

Who’s your favourite character to fight with?

This gets a little embarrassing. It’s a standard choice, but it’s Superman. For the first many years of my life I was Superman for Halloween. I’m a huge Superman fan.

How does it feel to kick the crap out of someone as Superman?

Which fighters give you the hardest time when you throw down against them?

For me, I have a very hard time with Solomon Grundy and Doomsday, who we recently announced. Any of the big characters. When they get up close, they do some amazing grapples and these really cool animations. Personally, I’m not good defending against them.

Okay, spell it out for us. Tell us in your own words why Injustice is going to kick ass.

Injustice is going to kick your ass because it’s finally a chance to play a movie of your favourite supervillains and superheroes fighting and see which one would win. It’s this epic experience I think everyone’s wanted and they can finally have. 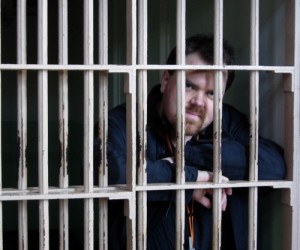 Jason MacIsaac is a freelance video game and technology writer. He was thrown out of the Green Lantern Corps after the notorious St. Patrick’s Day incident on Oa. You can visit his website at Gamejester.ca.