If you’re a stranger to these parts, you might not know that we’re as big Zelda fans as we are. Take it from us that we’re probably some of the biggest you will find on the planet.

So, as much as we hoped and prayed for new Zelda announcements in today’s Nintendo Direct presentation, we didn’t actually think much would happen outside of the Oracle of Ages and Oracle of Seasons entries getting a release date. Those two games (some of our favourites of all time) are hitting the 3DS Virtual Console on May 30, while we also got a new Zelda treat from Reggie himself.

The next Legend of Zelda title will be a direct sequel to A Link to the Past but be focused around an entirely new gameplay engine and feature new visuals. The game will launch this holiday, and while it appears that details are limited, there is actually a fait amount of information we can glean from the announcement.

Nintendo has unveiled a hybrid-3D view of the classic Zelda gameplay we’ve come to love on handheld platforms. It doesn’t hurt that A Link to the Past is one of the best games of all time, and if the gameplay and storyline are even a tenth of what they were then, this game is destined to succeed.

The gameplay mechanics look to borrow classic handheld Zelda themes while expanding on them to include a new perspective. Rounded crystal switches are back, as are the Mini-Moldorms that we love and hate at the same time.

There is a real sense of height in the game as battles and puzzles can take place on different vertical levels in a dungeon (or presumably other areas of the game). A Link to the Past always featured very well designed multi-level dungeons and castles to explore, so this looks to be a great homage to early handheld Zelda games.

The magic meter has also made its return and moved, along with Link’s health, to the bottom of the screen. The original interface had everything shown on the top of the screen, but it doesn’t seem like Nintendo wants to move health and magic to the touchscreen like they did with Ocarina of Time 3D. That’s an interesting move we’re sure we’ll hear more about as time goes on.

You might think Link is the same cartoon-Link we’ve seen in Wind Waker and, more specifically, Spirit Tracks and The Minish Cap, but he isn’t. In fact, an image of him jumping up a level in a dungeon clearly shows he’s a three-dimensional render of the same Link we know from A Link to the Past, as he should be given this game’s nature as a sequel. 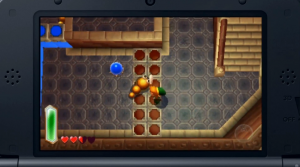 Three dimensions seems to be a real push here in a few ways. First, there’s the traditional overhead view of Link as he traverses environments. There are also some interactive elements such as Stalfos bones flying towards the screen as Link deflects them with his shield. Third, and perhaps most interestingly of all, is Link’s ability to become a cave drawing of sorts and navigate through a dungeon by traversing the walls. It shows a real sense of ingenuity on the design team’s part as well as a new element of gameplay in this new Zelda title.

We’ll likely get more details about what we’re calling A Link to the Past 2 at E3 this year, as well as the upcoming Wind Waker HD remake we’ve expecting on Wii U. Stay tuned to Eggplante’s Twitter and Facebook for all the upcoming Zelda details as we get them! 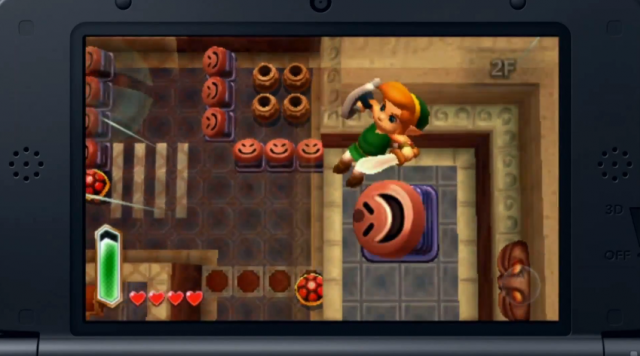 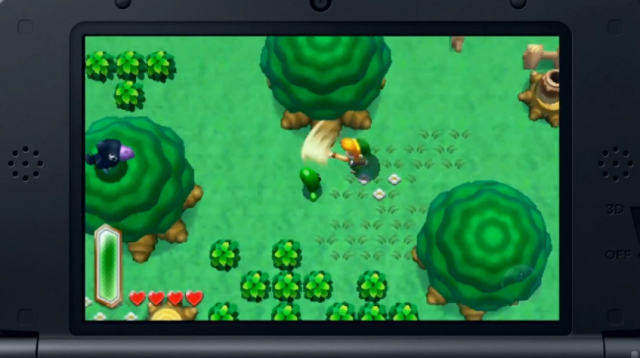 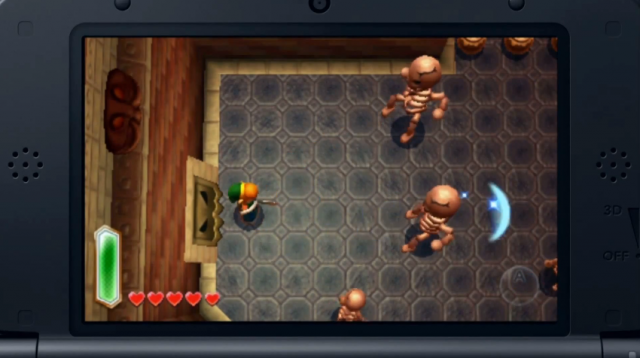