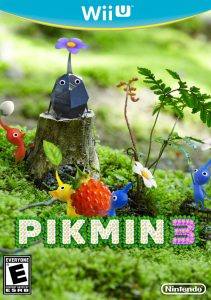 Among its other news today, Nintendo managed to squeeze out the release date for Pikmin 3. The game, which was supposed to be a launch title, switched to a “launch window” game, and is now missing that mark by about three months as its official release date becomes August 4th.

A traditional release date for Nintendo, August 4th is a Sunday, but it’s a Sunday that comes much too late for us. Could it be that Nintendo is delaying some of its bigger titles to have a solid second half of 2013? We’re not sure, but it seems like Nintendo is taking its time with some of the bigger games on its roster.

This year at E3, we expect to have more time to play around with Pikmin 3 than we’ve had in the past, as well as some time to take a look at the new winged pink Pikmin that was unveiled today.

According to Nintendo, the new flying Pikmin will be “helpful in different ways than the other Pikmin types,” Satoru Iwata explained in this morning’s Nintendo Direct.

We’re a bit disappointed by the news but are happy to hear that new elements are being added to the Wii U’s first Pikmin game to make it more unique than previous games in the series.

If you’ve been following along, you know that Pikmin 3 was the game that opened Nintendo’s E3 2012 press conference, with Mr. Miyamoto appearing on stage and one of our contributors, William Penney, making it on camera with real Pikmin on his shoulders! Here’s hoping we don’t have a repeat of the delays Pikmin 3 faced when we get to games like Wind Waker or any of the new Mario games we should be seeing at E3 this year.