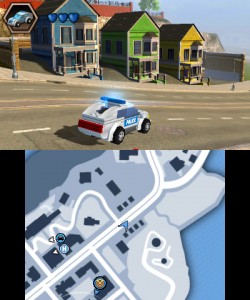 What a sad story. LEGO City: Undercover is easily our favourite title on Wii U so far for its music, gameplay, characters, and witty dialogue. We even posted a video highlighting just a fraction of our favourite moments in the game.

Unfortunately, LEGO City Undercover: The Chase Begins on Nintendo’s 3DS doesn’t exactly live up to the Wii U title’s par. While both games share the same name, the similarities almost entirely end there.

The worlds in each game are the same, but in very different ways. When you enter the game for the first time, you’ll instantly recognize the same areas that you saw in the Wii U game, except for one major thing: you can’t actually go anywhere! The game limits the areas you can go in the game to such a ridiculous amount, the game almost stops being an open-world adventure and becomes a boxed-in mess. Each area is cordoned off into a bite-size chunk that the 3DS can properly render. We get that. But why is there a minute of loading in between each area? More on that in a bit…

Perhaps it helps that you can’t see anywhere to go because there’s such a high amount of pop-in and a ludicrously short draw distance that it makes it impossible to find anything you’ll want to explore. The game literally draws about a hundred feet in front of you (not to mention people only fade in within about twenty feet) and then fades to a really nasty shade of baby blue. 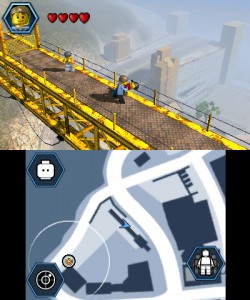 The storyline in The Chase Begins follows Chase McCain as Police Chief Gleeson (Mayor Gleeson in the Wii U version) brings Chase into the force. It takes place about two years before the Wii U game as Chase goes from rookie to legend (or so the box says). The storyline is not all that bad, actually, but the rest of the game makes you not care about any of that and made us want to curl up into a ball and cry.

One of our favourite parts about LEGO City: Undercover on Wii U was the incredible witty dialogue and great voice acting. While some of the wittiness (the rejected jokes from the console title) are here, there is almost no voice acting whatsoever. Some cutscenes have voiceovers, but we’re really disappointed to report that everything in game has been replaced with poorly-rendered text boxes. The 3DS just isn’t a handheld built to be reading stuff on while you’re doing high-action stunts. In an RPG like Zelda, it might be okay, but when you’re driving up a ramp and need to time and angle yourself perfectly, you don’t need to be trying to read at the same time.

Conversely, one of the things that bugged us to no end about the console game was the loading times. And for some reason, they’re still here! This game is running on a no-moving-part flash memory card that should have virtually zero loading time, yet the game has a pretty lengthy load screen when you fire up any save game. Granted, there isn’t a ton of loading during the experience, but it’s a bit bizarre that there’s any at all. 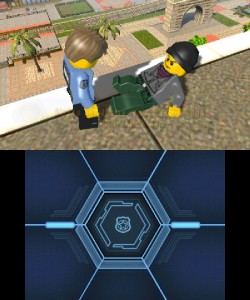 The audio, despite not having voice acting, is actually quite good for what is there. The audio is clearly stereo sound that has been made to seem very directional, but that’s a good thing. There are, of course, only two speakers on the 3DS, but audio has been perfectly placed in the game so that you can easily tell what’s supposed to hit each ear. None of this is even remotely enough to make up for the lack of voice acting in the game, but it’s good to hear (get it?) that not everything was a total wash in development.

Gameplay is very much the same as what you’ll find in the Wii U version, but the limitations posed by the lack of audio, poor draw distances, and other blemishes on the game really take the player from the experience. Small things, such as the small gameplay pieces floating around the map, have been reduced in quantity by a factor of ten, and the ones that do exist spin at a framerate roughly half the rest of the game.

Little touches made LEGO City: Undercover a success for the Wii U. Unfortunately, these little touches have not only been removed from The Chase Begins, but replaced by subpar graphics and audio assets that don’t do the game justice.

We thought that our love for the Wii U version of the game would make it easy to fall back into the world of Chase McCain and Rex Fury, but it was like reconnecting with an old flame: there’s a reason we don’t talk anymore.

Oh, did we mention that the 3D has no effect on the game whatsoever, and the touchscreen is used maybe five times throughout the whole game? No? Okay.

Do yourself a favour and cherish the experience you had with LEGO City: Undercover on Wii U. If you haven’t played it, you really owe it to yourself to do so. Playing The Chase Begins on 3DS will sour your experience, and certainly prevent you from grabbing the console version of the game if you haven’t already. Avoid this LEGO title entirely. 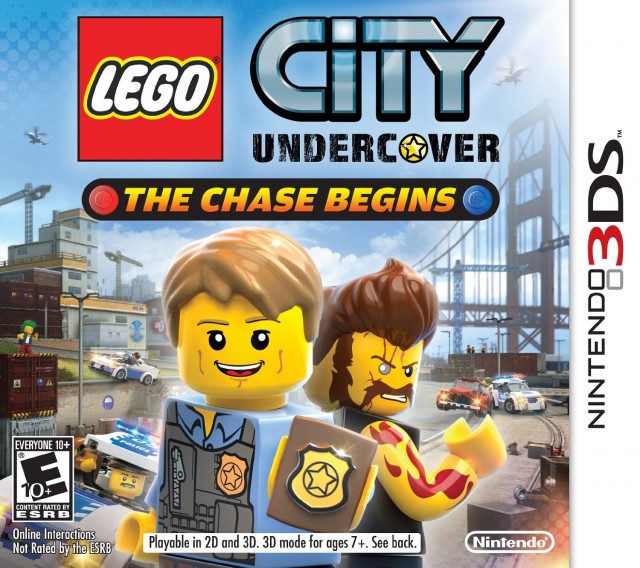 LEGO City Undercover: The Chase Begins Review
What made this game a success on a Wii U has been stripped out in this version. Not only does The Chase Begins suffer from poor direction, but a multitude of issues throughout gameplay that really make us question it has anything to do with the stellar console game.
VISUALS56%
AUDIO70%
GAMEPLAY48%
STORYLINE65%
The GOOD STUFF
The NOT-SO-GOOD STUFF
2013-04-19
58%Overall Score
Reader Rating: (2 Votes)
100%