We have poked, prodded, and teased Injustice: Gods Among Us for quite some time now, and it has finally answered our calls and agreed to go out with us. After picking up our copy from a midnight release, we promptly started NetherRealm’s latest title, with fingers twitching, and a fire in our eyes. We knew what to expect from the demo, but this would be our first time playing with all the characters and maps, so it was going to be a long night. 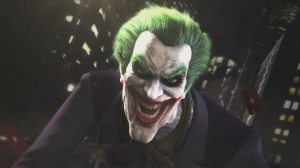 Where to start with a fighting game is often the easiest decision you can make when you have friends. We played 500 multiplayer matches (about 12.5 hours of straight game time) and the gameplay never got old, which is absolutely not connected to the fact that we won 382 of those matches. Each match is fresh and fun, and the maps do not get old, as there is always a new way to utilize the terrain to your advantage, transitions to pummel through, and cameos by some of the more obscure heroes to see in the background. Gameplay is also relatively intuitive.

The first hour of playing Injustice was all testing the different characters. With 24 characters and 4 more to come in DLCs, it is hard to figure out what your playing style is until you have played them all. Characters are separated into Gadget and Power categories. I prefer the titles “weak” and “strong”, respectively, for the categories of characters, as there are a couple of characters with superpowers that are Gadget users and vice versa. These categories change how the hero or villain interacts with the environments. Gadget users flip off items, roll heavy items, or plant explosives; actions that are repeatable. In contrast, Power users smash you over the head with them, usually just once. This helps span the divide between powerhouses like Superman and average human billionaires like Batman, but also adds a level of strategy between Power and Gadget. Power and Gadget are just archetypes for the playable characters, each with their own specific set of skills. 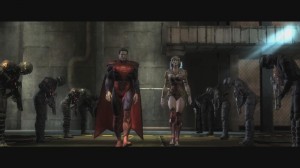 Playing each character felt like diving right into their body and harnessing all their skills. Each character had a very unique fighting style and weight to them, and those feelings were spot on with the characters themselves. Doomsday felt like a hulking powerhouse, Lex Luthor’s battle suit felt clunky and constraining, and Batman felt like the goddamn Batman. These features are not unheard of for NetherRealm, as there is the same feel in Mortal Kombat 9; however, it is different when you are stepping into the role of iconic heroes and villains, and it is clear they did their homework when making these characters. Attacks and movement are intuitive at first, but we found ourselves referring to the expansive move list repeatedly to perfect the combos and specials that we had no idea existed. We are not ones for tutorials or training; however, in this case we made an exception. The system is not over complicated so that casual gamers cannot play, but it has enough meat for hardcore gamers to bite into. This gives ample opportunity to gamers to showcase their skills on and offline with their favorite villains and heroes, but multiplayer is not the only thing Injustice brings to the table.

Once again, multiplayer is great, but what about those people without friends or Xbox Live? Well, NetherRealm has supplied a single-player story mode, Star Lab missions, and battles. Battles are your standard fare, where you are pitted against a number of characters on the roster, with some sort of disadvantage placed on your side, or quirk that changes the gameplay a little. At the end you are rewarded with an alternate ending to the story mode ending. Some of the are well done, others are half-baked or unoriginal, but either way they did not leave us wowed. Alas, this is much better than our feelings for the Star Lab missions, which harbored most of our ire and hate for this game.

Star Lab Missions are like the challenge missions for Super Smash Bros. Brawl, a series of missions that are supposed to give you ridiculous challenges, and change the gameplay. However, unlike the challenge missions for Super Smash Bros., we despised these missions. They are a series of mindless mini games, some of them nothing more than a prolonged QTE from hell, that serve only to cause both arthritis and an aneurysm at the same time. There are no awards other than more missions, and the occasional costume, if you get the achievement for it. I understand the premise behind the Star Lab missions is to be Mr. Miyagi from Karate Kid, and train us how to use our favorite character through mindless drills; however, you don’t get to choose your favorite character from the very beginning unless his name is Superman or Batman. Otherwise, you’ll have to keep on playing mini games with characters that you have no skill in to get to the one you want. This is the gaming equivalent of dangling a carrot in front of a hungry rabbit. Injustice, we would consider you a terrible tease if it were not for your story mode. 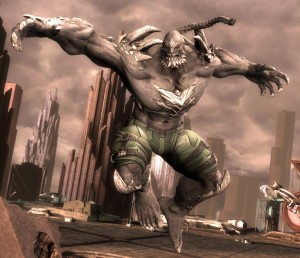 What if Superman, having been hurt by a personal tragedy, decided to bring absolute order and justice to the world? That is the premise behind the main campaign of Injustice. Without spoiling too much, the Joker kidnaps Lois Lane and tricks Superman into killing her, his unborn son, and the city of Metropolis. These events, leaving Superman solely responsible and realizing he was still vulnerable, led him to create the One Earth Government (a.k.a. The Regime). While not the most creative name that could have been chosen by the Son of Krypton, it was an effective military regime, and all who did not fall in line with Superman were snuffed out. Superheros that evaded the purge formed the Insurgency, with Batman and Lex Luthor as its leading members. Now, evil-regime-building Superman is nothing new, as this was an idea looked at in the animated TV series Justice League Unlimited in their episode “A Better World”. However, unlike Justice League Unlimited, Injustice  was much more visceral with its vision of a power-crazed Superman and a world controlled by him. One of the hallmarks of his corruption comes between chapters 10 and 11 when Superman and Shazam have a disagreement. The entire story makes a great movie, but as a game, it is lacking in some areas and is notably short. 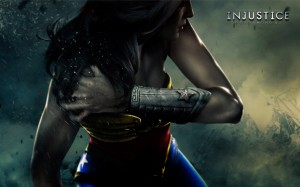 The story plays a lot like a movie, where the gamer takes control of the fight scenes and is expected to win in order to continue the plot. There are a lot of mini games too, the results of which will determine if you or your opponent will be going into battle with a smaller health bar. Other than that, there isn’t a lot of control to the events. We realize that this is a fighting game, and that the story of it would be a linear one; however, there are fighting games (Naruto Shippuden: Ultimate Ninja Storm 3 comes to mind) that give you story arcs with each character so you can pick your favorite fighter, go through their story arc and, if you want, complete the others to get the complete story. This supplies a much more vibrant, varied, and interesting multifaceted plot, as opposed to being put on a rail cart, picking up new fighters you cannot use as you go on, and only using your favorite fighter for two fights. It is not a fun mechanic to have in place, and it is a pain to go through as a gamer. Despite this, the story was interesting and provided a glimpse as to what an evil Superman would be like, and it seems awfully like a vengeful god.

Injustice supplies a great new fighting title for superhero fans and fighting fans alike. The number of cameos and the story in the game will have any comic book fan grinning for a while, but the real replay value comes from both on and offline multiplayer. As with all fighting games, you do not keep playing the game for missions or because the story was interesting, but for honing your battle skills and massacring other gamers for honor, glory, and experience points. If you are a casual or hardcore gamer with Xbox Live or friends, and are a fan of DC Comics, this is definitely a pick for you. If you are looking for a game with a deep and rich story, Injustice has a good story, just not one for you. As for us, we plan to master our Sinestro and Doomsday to kick ass in cyberspace.