We’re about to be thrown head first into E3 2013, but that doesn’t mean other companies aren’t allowed to have their fun. In fact, Apple is hosting WWDC 2013 the same week as E3, and that means we’ll be seeing tons of news this week.

Most notably, however, it’s Apple’s first public announcement of anything that isn’t financial statements in almost nine months! That means it is time to whip out another edition of Eggplante BINGO! (We know, there are a lot of bingo boards floating around this week, but bare with us, because they all have a reward!)

As you probably already know, you should print out the card below, cross out the free space (or if you’re really fancy, use a bingo dauber), and have the card on standby as you watch Tim Cook and friends announce whatever they’re going to announce on Monday at 10AM (Pacific Time, of course). The event will take place in San Francisco, and while we’re not streaming it live here, but you should be able to find a bunch of liveblogs on the web, and perhaps a livestream from Apple directly.

As certain things happen in the keynote, mark off the appropriate square on the board. If you get a line, either diagonal, horizontal, or vertical, snap a picture and send it to us (either on Twitter or Facebook or email) and we’ll enter you in a draw to win one of two $15 App Store gift cards!

The contest is open to anyone in the world that we can ship to and doesn’t have weird laws about getting free stuff. We also want to make it fair for anyone who can’t catch the presentation as it happens, so we’ll keep the contest open until noon on Wednesday, June 12th, which should give you enough time to catch the event replay and perhaps any blots you missed!

Now, get that bingo card printed out and have it ready! In the meantime, tell us what you’re most excited for from Apple at WWDC 2013 by hitting us up on Twitter and Facebook! 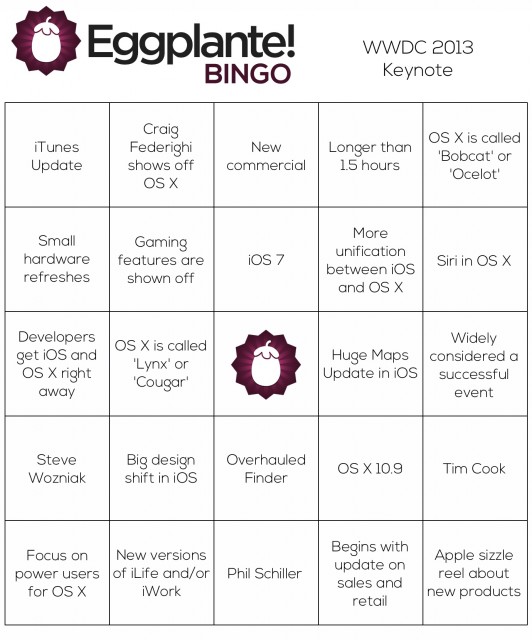