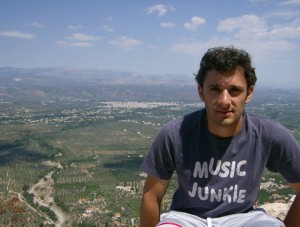 Being a long-time gamer and avid E3 follower, when Christopher first came to me and asked me to join him at E3 2013, I jumped at the chance. So I’m here to tell you about my first experience at E3 and what I’m expecting and looking forward to. But first let me take you through my humble beginnings as a gamer:

I’ve been a gamer for most of my life starting with my first gaming device, the Sega Game Gear, when I was 5 years old. I was glued to that device for years until my parents bought me and my brother our first console in the Nintendo 64. I was hooked yet again. Mario, Donkey Kong and Zelda would take over my life for the next five years, so when the next generation of consoles came out in the early-2000’s, it was with great difficulty that I made the switch to Xbox. The allure of a great graphics engine (and Master Chief) converted me to Microsoft’s machine. With the next generation of consoles coming out a few years later, I had a dilemma on my hands. I missed my Mario friends but having turned into a hardcore gamer, I also needed my fix on first person shooter games so I decided to buy both the Nintendo Wii and Xbox 360.

Now, I find myself at another crossroads. With the next generation already out from Nintendo, and Microsoft and Sony releasing theirs later this year, I’m wondering which console (or consoles) to spend my hard earned dollars on. Being at E3 this year will help me see first hand which of the big three companies are making the push to have the best console with the best games (and the fewest restrictions).

Here are the top ten things I’m expecting at my first E3:

10. The conferences always seem to create some of the most exciting buzz at E3. Microsoft and Sony are both gearing up for press conferences on Monday morning, but unfortunately Nintendo has decided to stick this one out this year. What new and exciting things will we learn about this year?

9. Xbox One exclusives: with the announcement of the Xbox one only a few short weeks ago, Microsoft mentioned a whole slew of exclusives that they will be announcing at E3. What are they?

8. Posters: E3 is known for its crazy amount of posters. They are everywhere including an incredible long one found at the entrance to E3 outside (usually reserved for Assassin’s Creed). I’m looking forward to seeing the many unique and creative designs out there.

7. Mobile gaming exploded onto the scene only a few short years ago. Since then, it has become a popular gaming experience for both hardcore and new gamers alike. What new mobile games will we see this year (Plants vs. Zombies 2, please)? And can developers continue to push that envelope? We will soon have the graphical prowess of an Xbox 360 in the palm of our hands.

6. Innovation: both games and consoles are sure to come out with new and innovative features to capture consumers imaginations. The Wii U has their new GamePad while the Xbox One will come with an incredibly advanced Kinect-based user experience. But what about games? How will games be utilizing these new features and what new features will games have? Will they stay the course of games past or break from tradition? As the saying goes, “If it ain’t broke, don’t fix it.”

5. Mario and Super Smash Bros.: it’s been 5 years since Super Smash Bros. last installment in the series, I’m curious to see what the next edition will look like. I’m hoping for lots of new playable characters (Tails, please)! And as for Mario, what path will be chosen for the next 3D instalment? Back to the galaxy or back to the castle?

4. Surprises: every year, E3 manages to have some big surprises in store. A few have already slipped through the cracks (Watch_Dogs, I’m looking at you) but for those that haven’t, I’m looking forward to what’s in store.

3. The awe of it all: I mean, we’re talking about E3 here. One of the biggest conventions in the world. Tens of thousands of gamers will be coming to Los Angeles, and I just hope I can take it all in.

2. Booths Galore: E3 is all about developers showing off their upcoming titles. Each developer will have their own unique booths showcasing their games. Big posters. Big advertisements. Big sets. Lots of buzz. Lets hope the games live up to the booths’ glamour.

1. Playable next-gen: Xbox One and PS4 are going to be playable at this year’s E3 before the consoles release this holiday season. What does the PlayStation 4 look like? What does the new Kinect experience feel like on Xbox One? I’m curious to find out.

So there you have it! I’ll be reporting back every day with my impressions and details on what I saw and did. Stay tuned to E3.eggplante.com for the latest on E3!