Aiden Pearce may yet walk among the E3 crowds, as the internet was recently treated to a leaked trailer for Ubisoft’s upcoming open-world blockbuster, Watch Dogs! The trailer appears to have been planned for Ubisoft’s E3 press conference tomorrow, and showcases Pearce as he follows a shady character that is part of a human trafficking operation. Hacking his way to the man in question and taking out his thugs, Pearce soliloquizes about how none of these villains are untouchable, nor anonymous. It’s a very impressive showcase of the game mechanics and promised freedom to players indeed!

While the trailer appears to be pre-rendered, there is at least a slim chance that the footage is running in real-time on next-gen technology. It could be meant to showcase the look of the game at its most powerful, specifically, on PlayStation 4 and Xbox One! Watch Dogs proved to be nothing to sneeze at even on current-gen hardware, specifically during its lengthy reveal footage at Ubisoft’s E3 2012 conference, but if this is a tease of the next-gen leg-up, early adopters of the new consoles can be very excited! 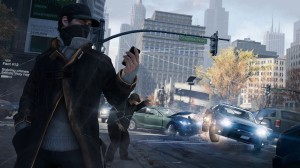 Ubisoft may already be enacting efforts to take the trailer down from news sites and YouTube, but you won’t have long to wait if you can’t find the leak, as their press conference is less than a day away. You may yet be lucky enough to catch it early however, if you’re fast! You could just as easily wait until tomorrow to see the official broadcast of it, but where’s the fun in that?

Regardless, Ubisoft’s press conference is tomorrow, Monday, June 10th, at 3:00 P.M. PST/6:00 P.M. EST, as a reminder. They are expected to showcase many high-profile games coming throughout the remainder of 2013 during the briefing, including Rayman Legends, Asssassin’s Creed IV: Black Flag, South Park: The Stick of Truth, Splinter Cell: Blacklist, and of course, Watch Dogs. It’s likely that some surprises will be in store as well!

Watch Dogs will be released on PC, Xbox 360, PlayStation 3 and Wii U, on November 19th of this year. It will also release on PlayStation 4 and Xbox One before the end of 2013, serving as a launch title for both next-gen consoles. The PlayStation 3 and PlayStation 4 versions are promised to have ‘one hour’ of exclusive content that is completely unavailable on other platforms, according to Ubisoft.

For all of the big news coming out of the Ubisoft conference, on Watch Dogs and otherwise, along with the rest of E3, be sure to keep your digital sights on Eggplante!