Back in 2009, J.J. Abrams did the impossible; He made a Star Trek movie reboot that was true to the universe and its legacy, while creating an enjoyable and inspired standalone blockbuster that both Trekkies and non-fans could equally enjoy. It was Star Trek for people who hate Star Trek, in other words! Now, J.J. Abrams and co. are attempting to double down on that success with a sequel to the 2009 reboot, Star Trek Into Darkness. What’s most amazing about this prospect however is that they succeed! 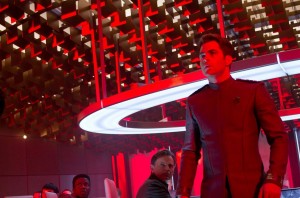 Star Trek Into Darkness is somewhat difficult to discuss at great length without some major spoilers, since much of the movie’s enjoyment depends on audiences not knowing what to expect going in. What I can divulge however is that the movie remains very true to the feeling of being a Star Trek movie, albeit in a different style than its 2009 predecessor. The 2009 movie felt like more of a large-scale adventure movie. Into Darkness however feels like more of a claustrophobic, intimate espionage thriller. It’s still undeniably Star Trek, but depending on your tastes, you may prefer the original movie for its higher emphasis on actual sci-fi, if that’s more your thing.

Into Darkness feels much more like an allegory for our modern era, which makes it feel far less fantastical than the previous movie. It’s a brilliant allegory, mind you, and one that deftly combines classic and new Trek into something very intense and fun to watch! Still, it’s difficult to deny that this second movie is more of a thriller than an adventure movie. If you want a Star Trek movie with a better plot however, while maintaining the same excellent re-imagined characters and clever sense of humour, Into Darkness will definitely come off as an improvement over its already impressive predecessor!

In any case, what is the movie about, without spoilers? Well, after getting into a spot of trouble on an undeveloped planet, where Captain James Kirk (Chris Pine) must make a controversial decision to save the life of first officer, Spock (Zachary Quinto), he loses command of his starship, The Enterprise. Re-assigned, Kirk inadvertently ends up on the receiving end of a terrorist attack against Starfleet by one of the organization’s own people, John Harrison (Benedict Cumberbatch). Off-the-record and ‘into darkness’, Kirk is thus tasked with heading a black op, with his same Enterprise crew, to enter hostile Klingon territory (yes, you finally see Klingons in the flesh in Into Darkness!) to instigate a manhunt for Harrison, risking all-out war with Starfleet and the Klingon Empire.

One theme that hangs heavily in the movie, particularly as a post 9/11 ethical dilemma (to this end, the movie is dedicated to 9/11 survivors and victims), is where the line stands with our leaders and what they must do to uphold peace and freedom. Starfleet is now shown in a different light than just being ‘the good guys’ like in the first movie, since the question is often raised as to whether they are truly a peacekeeper organization, or just a military organization in denial. Just as in our modern world, it’s tough to place the line between what principles people should uphold, and what needs to be sacrificed in the name of freedom and security. 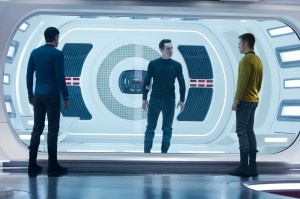 This is brilliantly illustrated with Harrison’s character, as Benedict Cumberbatch easily steals the show out from under the already amazing cast, universally returning from the first movie. Cumberbatch is also joined by newcomers Alice Eve and Peter Weller, who exceed expectations as two pivotal new personalities that classic Trek fans may recognize. Speaking of classic Trek, there’s been a lot of speculation that ‘John Harrison’ isn’t actually ‘John Harrison’. No spoilers from me, but I trust that longtime Trek fans will be quite happy with what is done with his character, if they have an open mind.

Even if Cumberbatch is the top actor in the piece, the rebooted Enterprise crew still all get their moment to shine at some point or another. The only one that sort of feels underused is Ensign Chekov (Anton Yelchin), since he spends most of the movie just running around Engineering on The Enterprise, with regular Engineering head, Scotty (Simon Pegg) not wanting to take part in the Harrison mission, instead staying on Earth for most of the movie. Don’t worry though; You still see plenty of great moments with Pegg’s character!

The only time that the story kind of derails is in the last fifteen minutes or so. The movie starts trying way too hard to rehash classic Trek moments in the new universe at that point, with a twist that doesn’t totally work as well as it should, and it loses that spark of brilliant creativity that most of the movie, and the new universe by extension, did so well. The whole point of rebooting Star Trek was to give it new creative possibilities that it couldn’t explore while bogged down by the old, bloated canon. Suddenly bringing back the same Trek storylines from before is just counter-productive and annoying! Thankfully, up to that point however, the story is nothing short of genuinely outstanding! 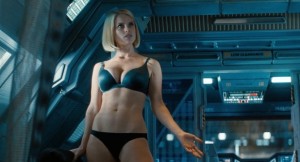 Even though the crew spends far less time moving between planets in this second movie (in fact, after the intro, they only ever visit Kronos, the Klingon homeworld, besides Earth), and most of the movie in starships, the set pieces and special effects are still highly impressive! Some of the action sequences are some of the best big screen moments seen so far this year, even when stacked against the also-impressive Iron Man 3! The action is more physical, visceral and intimate as a result, and this could very well be the hardest-hitting Trek action glimpsed to date!

This leads to the question of the 3D, and also the IMAX quality, since highlight sequences of Into Darkness were filmed with IMAX cameras. I went all out for an IMAX 3D screening of Into Darkness, which is definitely the ideal way to see the movie, so you can take advantage of these IMAX-enhanced scenes! When these sequences show up during an IMAX screening, they look absolutely spectacular! The bigger screen and more powerful projector sucks you into the movie in a way that standard 2D and 3D showings just won’t do in the same respect! It’s definitely worth the hefty price of an IMAX ticket for serious Trek enthusiasts especially!

As for the 3D, it can be a little more hit-or-miss, but it’s definitely a better 3D job than the rather weak 3D presentation in Iron Man 3, especially in the more potent IMAX 3D! Still, J.J. Abrams initially refused to convert the movie into 3D, wanting instead to use more of the budget on IMAX cameras instead, and it shows at times. The movie isn’t always effectively shot to accommodate a 3D presentation, particularly with J.J. Abrams’ returning lens flare fetish. Paramount twisted his arm however, and compromised by allowing the IMAX cameras, on the condition that the movie was converted to 3D in post-production. This makes Into Darkness the very first movie in history to be both shot with IMAX cameras and converted to 3D simultaneously. Fun fact!

With that said however, the 3D is quite uneven. Some scenes that really incorporate the 3D, especially in the beginning moments, look excellent, especially for a post-conversion! As the movie goes on however, the 3D tends to become more understated. The IMAX-filmed scenes are definitely enhanced from an atmospheric standpoint by the 3D, which makes the outer space sequences especially look genuinely stunning!

The 3D doesn’t often do much for the action however, where, just like the frequent dialogue scenes, it just kind of hangs there. I definitely recommend seeing the movie in IMAX 3D if you have that option though, since that’s the way it’s really meant to be viewed! If not, 3D fans will find enough quality 3D work to be satisfied in the standard digital 3D cut, but if you don’t like 3D, you don’t lose heaps by just watching Into Darkness in 2D. Still, even 3D haters will want to put up with it for the awesome IMAX 3D cut however, if for no other reason than to enjoy the enhanced power of the IMAX-filmed scenes to their full potential!

Bottom line though, if you were worried about the so-called ‘Star Trek curse’ skipping a movie and instead ruining the even-numbered offerings in the rebooted timeline, you can relax; Into Darkness is a very strong sequel and a very good Trek movie! It’s got a different style than its predecessor for sure, but if you thought that the story was lacking in the 2009 movie, you’ll definitely feel that this sequel is an improvement! The last fifteen minutes may almost ruin the movie for avid Trekkies, but if you’re a more casual or non-fan of Trek, you probably won’t notice this so much. If you’re in the market for another high-quality Summer blockbuster to follow Iron Man 3, you’ll be quite satisfied here, especially if you have the means to make an IMAX 3D screening!

Now, let’s hope that J.J. Abrams can bring this same kind of redemption to Star Wars in a couple of years!