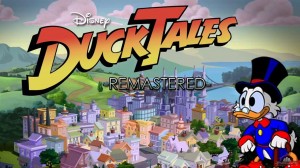 If you grew up playing DuckTales on the Nintendo, prepare to reunite with your most precious memories playing this incredibly fun game with Wayforward Games’ high-definition remake, Ducktales Remastered.

Instead of simply revamping the graphics of this classic, Wayforward has also enhanced each level, adding cut scenes as well as dialogue from the show’s original voice actors. Not only does this add a nice touch to an already stellar game, it adds a little more depth to the adventure, immersing us even more into our childhoods.

Just seeing gameplay footage of this game took me back.  The colourful environments and playful platforming action offered me that whimsy and nostalgia I can’t ever seem to get enough of.  I honestly couldn’t be happier to see both Wayforward and Capcom tap into their nostalgic sides and reminisce over a time long past.

DuckTales Remastered will be released for PS3, Xbox 360, Wii U and PC on Q2/Q3 of this year.  What do you think of this fan favourite’s return?  Let us know in the comments below woo-hoo!