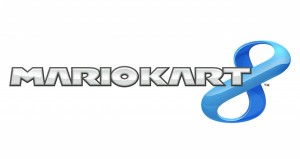 We weren’t big fans of Mario Kart 7 on the Nintendo 3DS. There was too much rubber-banding from 1st to 8th, it was a bit stale, and even with the underwater and hang-gliding portions, we found it a bit derivative.

So we can’t tell exactly why we’re so in love with Mario Kart 8 due out on Wii U in Spring of next year. As far as we know, it’s the same game with a few gameplay tweaks and high-definition graphics on the Wii U. Oh, and anti-gravity. That’s a big one.

Mario Kart 8 is still the same game you know. Of course, it features the same characters you know and love, as well as perhaps a few less familiar faces. Gameplay is, for the most part, the same as Mario Kart 7, which released in 2011, but for some reason, the game feels completely different.

Driving, by our estimation, is the smoothest we’ve ever had in a Mario Kart game, and the demo we played was extremely polished. There were about 18 characters to choose from if we counted correctly, but only three levels were playable. Luckily, they were very diverse. One level was a ghost house, another a cityscape, and the third was the Princess’s castle. 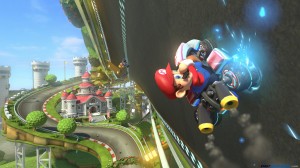 The big gameplay mechanic in Mario Kart 8 is anti-gravity. As you hop up on a wall or underneath a track that’s shaped like a möbius strip, your wheels (whether it be a bike, monster truck, or regular ol’ kart), rotate and light up like Tron, signalling that you’re traversing a track that isn’t exactly level. The camera follows your perspective around the track, and while it’s not quite vertigo-inducing, it’s certainly a trip to see the castle (and everything else) upside down. For spectators of a match, the camera angle doesn’t change as the player zooms through a course, so those watching actually get to see karts and bikes travelling upside down through the Mushroom Kingdom.

You can play Mario Kart 8 with the GamePad, Wii Remote and Nunchuk, or the Wii Wheel. It’s a bit disappointing that the GamePad’s main function is a horn, assuming you’ll ever actually use it. Don’t get us wrong, it’s a cute and perhaps novel idea, but if the GamePad is Wii U’s big innovation, couldn’t Nintendo have come up with something a bit more intuitive or functional for it? 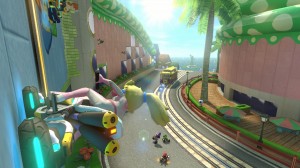 This instalment in the long-running series will also bring 12-player local and online multiplayer for the chance to race all your friends in huge, 12-person races. We couldn’t test out anything more than a two-person match, but we’re hoping the games are easier to set up than we found them in Mario Kart 7. Regardless, Mario Kart for all isn’t a small a leap forward.

Nintendo has only ever released one Mario Kart game per generation of consoles, whether for a home console or handheld like the DS and 3DS. That likely means that Mario Kart 8 is the last game in the series we’ll see before the 3DS gets replaced by its new hotness, and it’ll certainly be the last for the next five to seven years on a home console. Of course, we won’t be upset if Nintendo decides to break tradition and give us a new Kart game on Wii U in three or four years, but we’re not holding our breath.

We are, however, upset by the fact that the game won’t be hitting the Wii U until early next year, and given Nintendo’s love for delaying games lately, we’re a little worried it’ll get pushed back to Summer 2014. Either way, we’re really looking forward to getting our hands on Mario Kart 8 again seeing as it is shaping up to be the best instalment of the franchise yet.

Check out the announcement trailer for the game below, and let us know what you think about it on Twitter and Facebook!