At its media briefing last week, Microsoft announced “Games with Gold”, a service that promises Xbox Live Gold members two free games per month. The Redmond-based company is kicking off the service with a free copy of Fable III, redeemable for all Gold members through the end of the month.

Users can expect to get a new game on the 1st and 16th of each month, and the service seems to work just like Sony’s PlayStation Plus subscription service, whereby the titles you elect to download remain yours as long as you remain an Xbox Live Gold member. This will help keep people in the ecosystem, but without an increase in the price of a Gold membership, it’s kind of hard to argue against the $5 per month it costs to keep going. 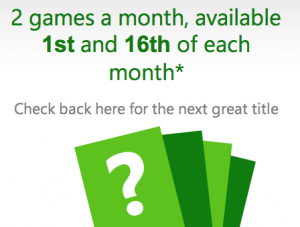 The next game that members can expect to receive is Halo 3, developed by Bungie and release all the way back in 2007. Hard to believe it’s been that long since the game came out, but we can’t argue with a free copy of it (even if we already have two of them).

Microsoft is pushing downloadable content for their free titles which means they’d still like you to pay for things like extra levels. In Fable III‘s case, they’re hocking the Traitor’s Keep Quest Pack right on the Games with Gold page, saying “Extend your free game”, though we couldn’t think up more of a first-world problem if we tried. Boo hoo for us and our free games.

Head on over to Microsoft’s Games with Gold page for details on your free copy of Fable III and all the details on how to keep getting free content!