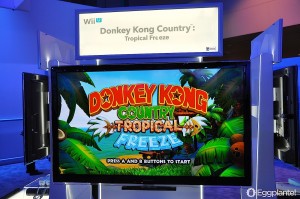 It’s on oxymoron, Tropical Freeze is. What isn’t an oxymoron is amazingly awesome, and that’s exactly what this game is.

We’ve had a couple of Donkey Kong Country games lately, first on the Wii, then with a 3DS remake that Brent just reviewed, and while we’re a bit (okay, a lot) disappointed that Retro Studios isn’t working on a new Metroid or Mario Kart 8, we couldn’t be happier with the game that we played at E3.

Donky Kong Country: Tropical Freeze is another entry in the Country series, yes, but what an excellent series to continue. Luckily, Tropical Freeze takes everything that the series is known for – characters, music, and fine-tuned gameplay – and elevates it all to a level we’ve yet to see from the franchise.

The design ethos behind Tropical Freeze was to explore more of a three-dimensional space with level design rather than stick to the usual 2D, side-scrolling aesthetic. The result is blasting from barrels into the foreground and background, spiralling around massive century-old trees, and diving underwater to collect the classic K-O-N-G letters that so often manage to evade even the most skilled players.

The design chops of the development team is being used to show off what the Wii U can do, as this is the first Country game you’ll be able to see fur on the characters, as well as tons of detail in the different times of day you can play in. The game is, as far as we can tell, running at 720p, not a full 1080p, based on the screenshots Nintendo provided via their E3 press site. Images for games such as The Wind Waker HD that have been confirmed to be running in 1080p are in full 1920 x 1080 resolution, so we have to assume that Tropical Freeze will launch below true high definition resolution.

Of the five levels on display (we played all five; the game is that good), all had their own unique treats. You can expect more mine carting than ever, but it has been better tuned such that it doesn’t quite require pixel-perfect accuracy to land a jump. Don’t take that to mean that it’s too easy, though, as the game plays out in a very balanced manner that hopefully won’t have you throwing your GamePad at the screen.

It is worth noting that the demo we played gave us three hearts, where as the Country series usually starts you off with two. This is especially important because, even with three hearts, we found ourselves in trouble a bit more than we’d have liked. The pixel-perfect accuracy might not be as intense this time around, but that doesn’t mean the game isn’t a challenge, even despite that. Looking at the screenshots Nintendo provided, the retail title will go back to the usual two hears per character. Be afraid.

We didn’t get to try out Dixie Kong’s moves in the demo, though she will be in the final game. We’re told she has her own moves and plays differently than Donkey Kong or Diddy Kong does, but we’ll reserve judgment on that for the retail version of the title.

Music in Tropical Freeze is, as you might expect, wonderful. The theme song needs absolutely no modification, yet is somehow more vibrant and enthusiastically played. That’s probably just our love for the classic theme song, but it’s true nonetheless.

All of Nintendo’s games seemed to have a high level of polish on them on the show floor, and Donkey Kong Country: Tropical Freeze was no different. The game seems to be near-final, and that makes sense given it’s November release window, though only time will tell just how much further along Retro Studios will be able to take the game until then. Have a peek at the trailer for the game from the E3 Nintendo Direct presentation last week and let us know what you think about the game!