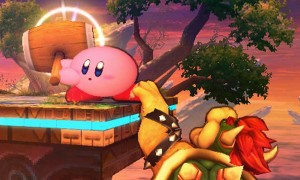 In case you missed the Nintendo Direct presentation that substituted for Nintendo’s press conference at E3 2013, Nintendo capped off the broadcast by not only formally drawing back the curtain on their upcoming Super Smash Bros. offerings, but confirmed that they would be releasing as soon as next year! Since then, Super Smash Bros. director, Masahiro Sakurai has been talking up the eagerly anticipated brawlers, with one planned to come to 3DS, and the other to Wii U.

Since the confirmation of the Animal Crossing Villager and Mega Man being added to the roster within the Nintendo Direct trailers, it’s since also been confirmed that Wii Fit’s Trainer would be joining the fray as well. This would likely mean that the Pokemon Trainer character from Super Smash Bros. Brawl is unlikely to return in the new games, to avoid confusion between characters. Despite Namco Bandai assisting with development of both the 3DS game and Wii U game, Sakurai has also stressed that, should more third-party characters be featured beyond Mega Man, Namco Bandai characters will not receive priority, nor special treatment.

“Character selection is stressful almost to the point of death!” declared Sakurai, who went on to list that important factors like cosmetic style, game balance, special moves and pretty much everything else are weighed at length before welcoming a character into such a beloved crossover franchise. Clearly, the game’s rosters are still being finalized, with the hint that some characters may be exclusive to one game or the other, even if it’s confirmed that both will have the same number of playable fighters.

It’s already been confirmed that some arenas will be exclusive to either 3DS or Wii U, which is probably the main reason as to why the games will not support cross-play, neither locally nor online. As predicted, the 3DS game offers arenas based on Nintendo’s handheld legacy, while the Wii U game features backdrops that take after Nintendo’s home console history. As the trailers demonstrated, the art style differs greatly between the two games as well; The 3DS game having cel-shaded graphics bolstered by the 3D effect, while the Wii U game has cutting-edge HD visuals that appear more detailed and lifelike.

While discussing characters, Sakurai also made clear that the Nintendo Direct trailers weren’t bluffing; The titles for the new games are in fact simply, Super Smash Bros. for Nintendo 3DS and Super Smash Bros. for Wii U. This may be a bit disappointing to some, as it means the fight term motif has been thrown out. For both games however, Sakurai stressed that the game speed will be re-tooled to be somewhere in between the fast pace of Melee, and the more methodical, screenshot-friendly pace of Brawl.

Sakurai also argues that the simplified titles were to make certain that consumers understood that the two games are highly distinct experiences, and specifically tailored to both of their respective platforms. This seems to be another reason why they don’t feature cross-play, even if some other form of cross-interactivity hasn’t yet been ruled out. It also seems to support the theory that Super Smash Bros. fans may have plenty of reasons to own both games, and not necessarily pick just one.

Lastly came the inevitable question of DLC, a particular favourite amongst fighting games in today’s industry, and a motion that Nintendo has recently pursued in several games on both 3DS and Wii U. Sakurai, going against the current, claimed that there are no current plans to incorporate DLC, whether downloadable bonus fighters or otherwise, into neither the 3DS game nor the Wii U game. Of course, given that both games aren’t arriving until next year at the earliest, there is time for Nintendo to twist his arm and change his mind, if it’s to the benefit of the game.