It’s funny because the idiot cops are ladies … right?

This seems to be the pitch behind director, Paul Feig’s latest effort, The Heat. Following in the footsteps of 2011’s highly successful and beloved Bridesmaids, The Heat is another movie from Feig that aims to place female leads in a genre that is normally entirely dominated by men. What Bridesmaids offered for gender equality in crass and low-brow wedding comedies, The Heat aims to replicate for buddy cop comedies.

That was the goal, anyway. Despite positive pre-screen reception to the point of distributing studio, Fox moving The Heat from a planned April release to a more ambitious June premiere, and despite Feig being so proud of the final product that he’s already begun work on a sequel, The Heat didn’t prove so hot with many critics. It was panned in several high-profile outlets, despite audiences still already helping it turn a profit with strong ticket sales.

Now, personally, I like Paul Feig. I appreciate his vision of wanting gender equality in more ‘raw’ movie types, which are still pretty well entirely dominated by men. I completely agree with his career motives. This is a big part of the reason why I considered Bridesmaids to be one of the best comedies in 2011, a year absolutely packed with adult comedies like it. It made a rude and gross comedy starring an ensemble cast of women, and it made it work.

As for The Heat, well, yes, it’s not as good as Bridesmaids. The mad genius of Bridesmaids isn’t completely replicated here, since The Heat does seem to be a bit more dependent on cliches and initially unlikeable protagonists. Some parts are annoying. Some parts are trying too hard. Some parts just feel like they wrote the script for men and threw women into the parts, hoping nobody would notice. After all, I seriously doubt that even policewomen throw around the word, “Asshole” at each other as much as they do in this movie!

And yet, despite how blatantly flawed The Heat is, I actually really enjoyed it, as did the date that dragged me to it. Yes, the critic in me can pick apart this and that, but the moviegoer in me can easily enjoy The Heat on one simple foundation; It’s funny. Yes, sometimes it’s stupid and sometimes it’s cliched, but more often than not, it is legitimately funny!

I’ve said before that a movie doesn’t need to be original to be good. The Heat is a good example of that. If you look past the fact that you probably could have cast men in the parts of its lead actresses and not lost much, the movie’s jokes still hit more often than they miss. That should really be the bottom line when seeing a comedy, shouldn’t it?

Enough about all of that though. What is The Heat about? Well, it’s a buddy cop comedy, as mentioned, starring Sandra Bullock as uptight FBI agent, Sarah Ashburn, and Melissa McCarthy as streetwise, ass-kicking Boston detective, Shannon Mullins. The two end up forcibly working together after Ashburn is shipped to Boston to assist in taking down a powerful drug lord. Yes, they initially hate each other. Yes, they eventually bond over their shared social issues. Yes, by the end of the movie, they’re best buddies, even when they have no right to be. It’s a complete run-through of the buddy cop comedy playbook, for better or for worse. 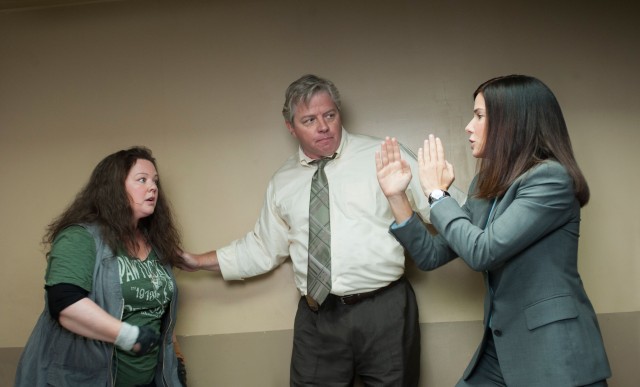 I will say that the entirety of the movie is anchored by Melissa McCarthy as well. Sandra Bullock is hardly unfunny here, but she does seem to be playing mostly the same character she played in Miss Congeniality, only substituting the tomboy elements for being extra uptight. It’s McCarthy that really takes the movie and runs with it. As usual, she dives headfirst into her part and goes for broke. As a result, she ends up being the driving force behind most of the comedic scenes, while Bullock is left to play the straight man… or woman, I suppose.

The rest of the supporting cast is oddly played straight, almost to a fault, with only one or two exceptions that I don’t want to spoil. The movie casts people like Marlon Wayans and Michael Rapaport into supporting parts, but doesn’t make use of their comedic talents at all. Herein may lie a downside to Feig’s directing; He’s almost sexist in the other direction with his comedies.

When I re-watched Bridesmaids, I noticed the same thing with many of the male actors; They’re not given good jokes to carry on their own. They’re completely in service to the female characters, who are always the epicenter of the humour, with the men simply being foils. It’s basically the opposite of what is normally accepted in your usual R-rated comedy gender politics.

Really though, at the end of the day, Bullock’s and McCarthy’s chemistry on screen is undeniable. The two are like peanut butter and chocolate. They shouldn’t work at all together, but they do. This is why The Heat ultimately works. It makes its pair of misfit performances believable, and that in turn makes it funny. Yes, it has nothing to do with the leads being women, but it doesn’t totally matter, because the movie still manages to be quite humourous.

Thus, I would advise you to keep your expectations in check here. The Heat seems at least partially to be a victim of misplaced expectations in some circles. People seem to walk into it expecting Bridesmaids 2 in disguise, and that’s not what this is.

I have to admit, it’s the same frustration that I kept feeling when some people mindlessly bashed Man of Steel, another movie I immensely enjoyed myself, but one that I felt was a victim of unrealistic expectations. When I pressed these people for reasons as to why they apparently hated the movie, the reasons provided were either poor or non-existent. The problem was that they saw Christopher Nolan’s name on the previews, and walked in expecting The Dark Knight. There was nothing wrong with the movie itself. Audience expectations and preconceptions were to blame.

The Heat is much the same. Your expectations must be kept in check! There is nothing wrong with the movie itself. Yes, there is nothing exceptional about it, and it’s hardly a revolution for the buddy cop comedy sub-genre, even with two female leads for the first time. Yes, not every joke is laugh-out-loud funny, and yes, Bridesmaids is a better movie. This isn’t Bridesmaids though! That’s very important to remember! It’s a buddy cop comedy that just happens to star women!

If the pleasantly surprising This is the End isn’t your idea of good humour, then I believe that you should give The Heat a try. Even if you just enjoy the actors, the director, the buddy cop comedy sub-genre, or just want something breezy and digestible, The Heat will satisfy you nicely. It’s a good buddy flick. It’s a good date movie. It’s good, even if it’s not the instant classic that Bridesmaids ended up being.

So, the cliched buddy cop comedy is funny enough to recommend to those interested. If that’s a solid endorsement for you, then go ahead and see The Heat.