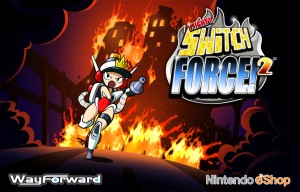 The original Mighty Switch Force! was one of the earliest indie success stories on the 3DS eShop. An evolution of the two Mighty games released on DSiWare, Mighty Switch Force! blended puzzle-platforming with fast, reflex-based action, and was a short, but sweet indie gaming pleasure! It was so beloved in fact that developer, WayForward even did a full high-definition revamp for the Wii U’s own eShop at launch, dubbed Mighty Switch Force!: Hyper Drive Edition. It lost none of its appeal in the transition!

Now however, we have an actual sequel to play, Mighty Switch Force! 2, exclusively on the 3DS eShop. This is the first time that WayForward has delivered a direct Mighty sequel, which is a true testament to the acclaim of its predecessor! Once again, you take control of proficient brunette pixel babe, Patricia Wagon, this time trading in her police badge for a firefighter’s hose, even if the gameplay is much the same.

As with the previous game, Mighty Switch Force! 2 is divided into sixteen levels, dubbed ‘Incidents’. In each, Patricia must turn her hose on various deadly blazes, maintaining her Siren Helmet that lets her phase various blocks in and out of existence at a tap of the A button. Using the helmet and the hose, the player has to make paths for our firefighting heroine, so they can traverse the treacherous terrain, and rescue the five reformed Hooligan Sisters from the first game. After snatching all five, the player must then reach Patricia’s robot buddy, Gendarmor to make their exit. 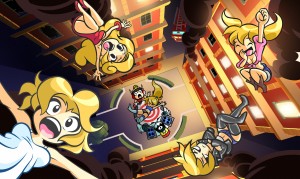 As you can imagine, the new firefighter make-over gives the player new abilities to use, and new obstacles to contend with. Not only do interchangeable Switch Blocks, Colour Blocks, Launch Blocks and Shield Blocks return from the first game, but you’ll also need to master new challenges that make use of your hose. Examples include using your switch powers to arrange a path for water to spray through, in turn using said water to wash away Mud Blocks, and dousing flaming Oven Blocks temporarily, so that they are safe to cross.

If you enjoyed the first game, as many did, then you’ll be happy to see the same highly engaging gameplay experience here. The level design is once again awesome, with very devious and clever obstacles that make very imaginative use of even a very simple set of play mechanics. The emphasis on creativity over scope in Mighty Switch Force! 2 means that players actually have to rely on their own skills, reflexes and brains to get ahead, not simply figure out a tangled and convoluted set of play mechanics. It’s simple, refreshing, and what retro-minded indie gaming should be all about! 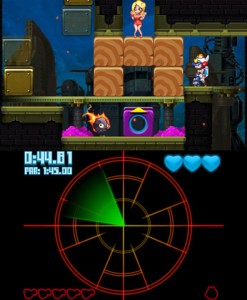 Of course, that’s before the aftertaste of recycling sets in. Yes, there are new obstacles, enemies and a new weapon/tool to use in Mighty Switch Force! 2, but the fundamental design is pretty well entirely replicated from the previous game. It’s the same drill of switching block arrangements around so you can navigate some fast-paced platforming to reach the five girls, and exit again. It’s certainly still fun, and not at all bad, but even with the firefighting revamp, Mighty Switch Force! 2 often comes off as feeling more like an expansion and not like a true sequel, especially since it looks and sounds the same as the previous 3DS eShop release to boot.

On the bright side, the graphics and sound are still quite good in that case. WayForward’s talent for pixel art continues to impress in the graphics, and the 3D effect is once again done surprisingly well! There’s even fluttering embers that appear to waft in and out of the 3D Screen in certain stages if you crank the 3D Slider, a nice touch that the first game didn’t have.

Likewise, the techno/chiptune hybrid music is yet again superb, not to mention very catchy! Sound effects are appropriately cartoony, as are Patricia’s hyper-excited voice clips. Some of Patricia’s declarations are recycled from the first game, though she does make firefighting remarks instead of police officer remarks as you enter each stage, predictably.

Of course, another downside is that, like its predecessor, Mighty Switch Force! 2 is extremely short. You can feasibly complete the whole game start to finish in just a couple of hours if you have any degree of puzzle-platformer skill. From there, your only incentive to return is once again trying to complete each Incident under the alotted ‘Par Time’. 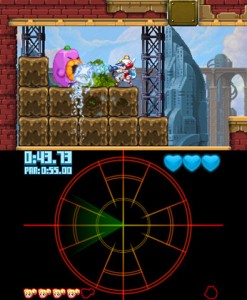 It’s hardly mandatory though, especially since there are better rewards for finding all of the ‘Hidden Ugly Babies’ (yes, seriously) in each stage, which Patricia affectionately punts into the stratosphere upon collection. That’s got to be some sort of professional negligence.

Oh, and finding all of the Hidden Ugly Babies gives you the ability to play as Patricia in her ‘Gym Clothes’ (read: underwear), because it was such a classy incentive in the first game that WayForward had to offer it again. This is of course between ‘chibi girl’ art of Patricia and the Hooligan Sisters shown during your Incident results. Looks like WayForward’s taste for cheeky, pixelated sex appeal is alive and well, after they went to so much effort perfecting it in Shantae!

So, with Mighty Switch Force! 2, you’re getting much of the same experience as the first game, with one or two cool tweaks. If you enjoyed the first game, whether on 3DS or Wii U, then you’ll enjoy the sequel just the same. As to how the second game stacks up to the first, well, they’re about exactly equal. We did find the second game a little more clever in terms of the puzzles, even if the first game had a better sense of action, but the difference is really a wash. If you like the Mighty games, then you’ll like this.

Mighty Switch Force! 2 still doesn’t reach the hallmarks of being a 3DS eShop champion akin to Pushmo/Crashmo or Sakura Samurai: Art of the Sword, but it’s still one of the better-designed and more enjoyable 3DS eShop games for sure, just like its predecessor. It’s still over too quickly, but for just $5.99, the price is right for series fans and puzzle-platformer enthusiasts alike, or for people who just can’t turn down a cute, pixel-y blonde woman in need.