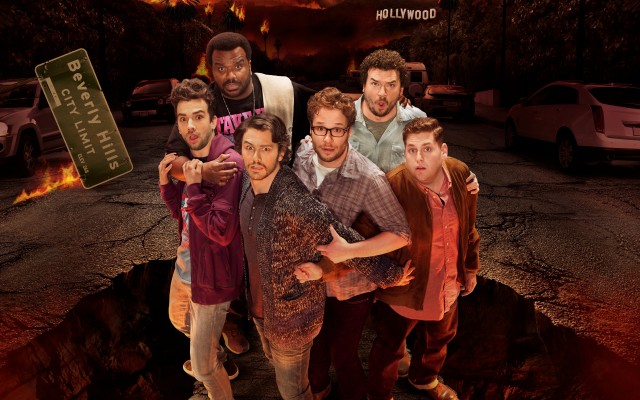 A group of contemporary comedians face the End of Days. The jokes just write themselves, right?

Apparently so, as all-star comedy writing duo, Seth Rogen and Evan Goldberg are making their inevitable directorial debut with their latest written project, This is the End. Developed from a short film called Jay and Seth vs. The Apocalypse, which was put together by Rogen, Goldberg and Canadian co-star, Jay Baruchel in 2007, This is the End brings together an all-star comedic cast, as themselves, and sets the literal end of the world upon them.

The result is one of the most surprisingly inspired, hysterically funny movies that has been released all year so far! This is the End is an easy contender for this Summer’s top surprise hit, as the movie is not only very, very funny, but takes what could have been a self-indulgent mess, and makes it somehow heartfelt and celebratory without descending into annoyance and self-congratulation. It’s very low-brow, as you can expect, and has several messy and/or gory scenes, albeit scenes played for giggles all the same. Still, if you can handle the crass presentation, This is the End is a must-see comedy for those old enough to gain admission! 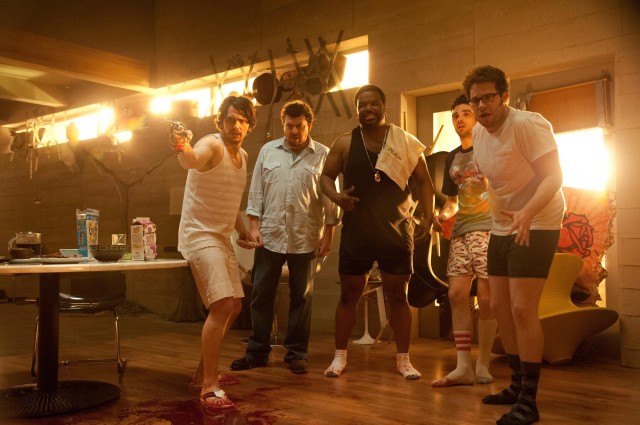 The movie plays out not like a traditional comedy story arc, but instead like an extended sketch. This sounds like it could strain the same joke to breaking point, but it’s incredible how continually fresh, consistently enjoyable and highly surprising that This is the End ends up being. Yes, you still need to find the over-arching joke of modern celebrities facing the apocalypse to be funny, as it’s still the driving force behind the entire movie. If that does sound funny to you though, you’ll be amazed at how far the movie can legitimately run with it!

Proceedings begin with Canadian duo, Seth Rogen and Jay Baruchel re-uniting in Los Angeles. Jay just wants a quiet weekend, smoking weed and playing video games with his buddy, Seth. Seth however has planned for the two of them to make an appearance at a party, being held at James Franco’s newly-built house, despite Jay’s objections. Amidst jokes about a coked-up Michael Cera, exasperated Jason Segel and un-fashionably late Paul Rudd, the apocalypse happens, eventually trapping a group of the actors in James Franco’s estate, as the world goes to hell around them.

From there, it’s mainly just a bunch of jokes. Some of them are predictable, sure. The oblivious Danny McBride passes out at the party and misses the world imminently coming to an end. Craig Robinson confesses to enjoying drinking his own pee during a video confessional. Jay Baruchel has to awkwardly spoon with the other guys when they get scared. Even the predictable gags however are funnier than you would probably imagine. The surprisingly smart script makes it all work, even when you can see where a joke is going. 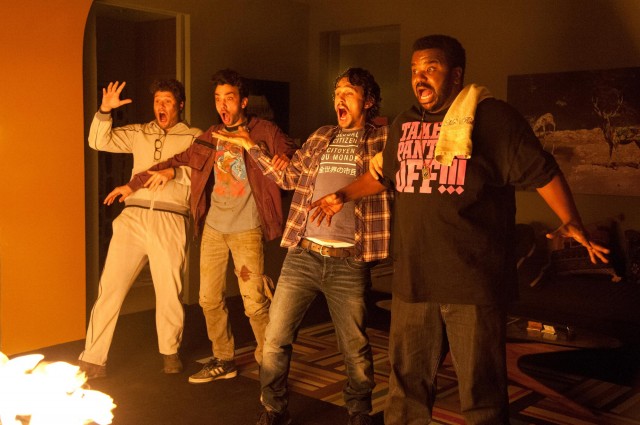 This also isn’t considering the jokes that you won’t expect either, which are often the best ones. I obviously won’t be spoiling these gags, especially since most (refreshingly) were actually not given away in the trailers. Still, be sure to look forward to them, because some of the left-field jokes will have you doubled over in laughter, especially with how passionately the actors throw themselves into their parts. After all, they’re all playing exaggerated, extra eccentric versions of themselves!

In a way, This is the End is a difficult movie to review, because it’s so incredibly funny, but I can’t really explain how and why it’s funny without spoiling key jokes. It just all works. As silly as it is, it’s clear that everyone is putting their best efforts into both the story and the performances. Even though you know that the caricatures that every actor is making of himself are just done for laughs, you believe their weird, almost tangible dynamic, even in such a silly movie. The movie comes as a true passion project from all involved, and is at its best when it’s not afraid to lightly jab at all of its main actors, and the up-and-down careers they’ve all led so far.

Are there downsides here and there? Well, sure. Again, if you don’t find the main joke funny, then you’ll probably enjoy the movie less, since even many of the best jokes rely on this backdrop. Some may be disappointed that just about all of the celebrity cameos are squished right at the beginning, with almost none when the apocalypse actually happens and offs most of them. Likewise, some of the funny caricatures set up at the initial party don’t get enough screentime, particularly the hysterical performance given by Michael Cera, acting the polar opposite of how he’s said to act in real life. 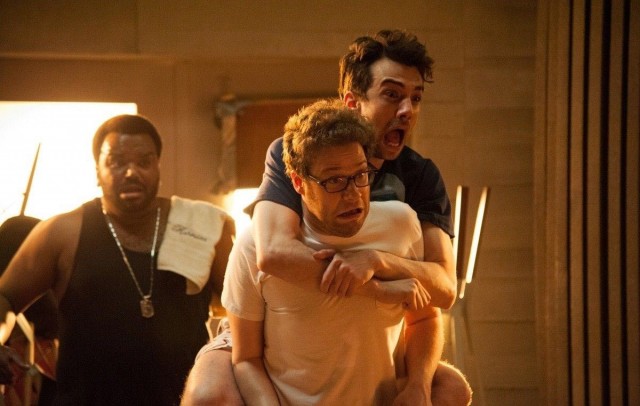 Really though, This is the End is not a movie that merits much critical analysis. It’s just a goofy movie made by a bunch of very funny guys having a blast, and in turn, the audience has a blast, because this surreal project just works. The joke is so simple, and yet it finds even more outrageous possibility for laughs that audiences couldn’t possibly anticipate. If you felt that Seth Rogen and Evan Goldberg had lost their touch after the likes of The Green Hornet and The Watch, you’ll find that they’ve made quite the return to form here!

In fact, speaking of the writing career of these two, one of the best parts of the movie is how much they cheekily reference a non-existent sequel to 2008’s cult hit, Pineapple Express. Considered by some to be the duo’s best movie to date, and even better than Superbad, Seth Rogen and James Franco often discuss their ideas for a sequel at several points in This is the End. It’s a surprisingly inspired solution to a movie that just can’t get off the ground, and even more is done with this sequel discussion idea that I can’t spoil. I will say however that Pineapple Express fans should see This is the End for these jokes alone, because they’ll definitely love them!

I can still highly recommend This is the End to virtually any adult audience that appreciates good comedy though. Yes, it’s still a low-brow movie, and you need to have a tolerance for low-brow gags, but that’s really the only barrier of entry. The rest of This is the End is just a hysterical, highly memorable great time with a bunch of great actors. Even when the movie spends seemingly upwards of five minutes having the guys shout at each other about jerking off, it’s still side-splitting levels of funny! Part of this surprisingly effective repeat humour is no doubt the fact that over half of This is the End’s dialogue was ad-libbed. I can’t say I’m surprised by that.

So, yes, you really don’t want to miss This is the End, which could go down as the funniest movie of 2013! The year is only half over, so there’s plenty of time for another movie to go for the year’s comedy crown, mind you. I must say however that This is the End is going to be an extraordinarily tough act to follow.

After all, when you successfully make the apocalypse itself hilarious, what can anybody else do?