Considering what a pop culture powerhouse Skybound’s and Image Comics’ The Walking Dead franchise has become over the course of the 2010’s, mostly off the back of AMC’s highly popular Walking Dead TV universe, it’s hard to think about another Robert Kirkman-created comic book franchise having just as long a run in the printed panels! Finally though, Kirkman’s other longest-running Image Comics franchise, Invincible is making the leap to the small screen, via a weekly adult animation series made for Amazon Prime Video, and supposedly with a separate live-action film adaptation simultaneously in development at Universal, a project that was confirmed by Kirkman to still be in active development as of the start of 2021. Like The Walking Dead, Invincible saw its first comic book issue published by Image Comics in 2003, with the series’ entire run spanning to 2018, just one year shy of The Walking Dead’s own comic book conclusion in 2019.

Obviously, being a superhero franchise, there’s a world of difference between Invincible and the post-apocalyptic, horror-themed universe of The Walking Dead. What Invincible does have in common with The Walking Dead however is a mature-minded storyline with a huge emphasis on shocking violence, and the darkest sides of the human condition. Those themes remain apparent in Invincible’s new Amazon Original animated series, which fully translates the biting edge and gruesome gore from the series’ original comic book inspiration with a stunning degree of faithfulness! That’s hardly surprising for Amazon, considering their enormous success with the similarly violent and harshly satirical superhero dramedy series, The Boys, of which Invincible feels right at home alongside. In fact, The Boys’ executive producers, Seth Rogen and Evan Goldberg also serve as executive producers on Invincible, handily completing that connection! 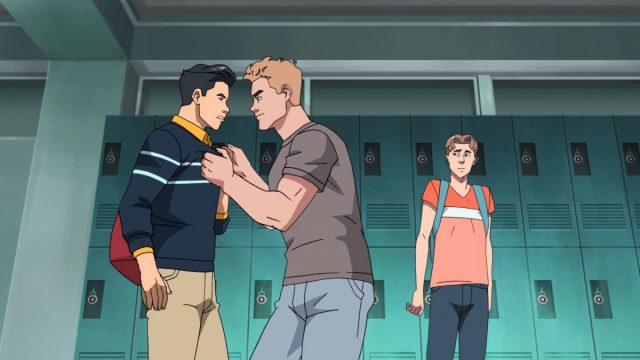 What separates Invincible from The Boys in the end, beyond the fact that Invincible is an animated series, whereas The Boys is a live-action series, is the fact that Invincible is a family-focused story, not a celebrity-focused story. It primarily unfolds from the perspective of Mark Grayson, the 17-year-old son of the world’s strongest superhero, Nolan Grayson, a.k.a. Omni-Man, who more or less functions as a Superman stand-in for the Invincible universe. Like Superman, Omni-Man is an alien from a faraway planet (albeit one that wasn’t destroyed in this case), and this means that Mark is likely to inherit superpowers, which he quickly does. Almost too quickly in fact, in turn mastering them just as quickly, to the point where it’s a little unfulfilling. Regardless, in now having to live up to the incredible legacy of his father, Mark thus strives to excel as a budding superhero in his own right, eventually taking on the identity of ‘Invincible’.

Initially, this seems like a fairly straightforward origin story for a third-party, independent superhero universe that’s not affiliated with Marvel or DC. This first episode itself even banks on that audience expectation, before suddenly pulling the rug out from viewers with a shocking, unhinged conclusion that begins to flex Invincible’s absurd degree of gore and violence. As much as The Boys is also a spectacularly violent, gory series itself in many respects, the fact that Invincible is an animated series allows it to whole-heartedly embrace the most exaggerated, squeamish and horrific violence from its comic book inspiration, while also keeping the budget down! It’s a long, nearly 50-minute wait to get to the first taste of Invincible’s surprising bloodlust, but when you do get there, the promise of a no-holds-barred adult superhero story is quickly lived up to in terms of the violence at least! 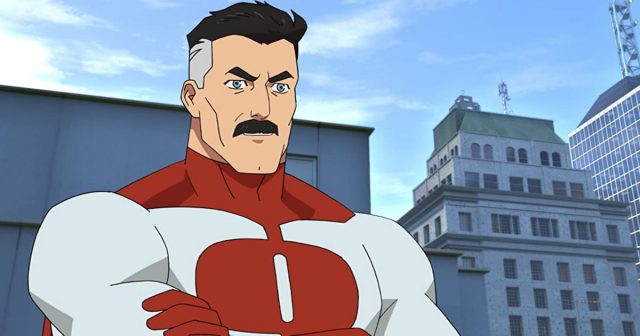 Before that though, Invincible tries to perfect its various other moving parts. The show operates in a universe that clearly has a long, rich history of superheroes and super-villains, as illustrated by the mundane appearance of both throughout this first episode alone. Omni-Man is even part of a Justice League-inspired superhero team called the Guardians of the Globe, who are all voiced by current or former Walking Dead actors, just like Mark himself, who is voiced by former The Walking Dead mainstay, Steven Yeun. In fact, it’s the Guardians of the Globe that end up meeting a very grisly end at the hands of Omni-Man upon the conclusion of this debut episode for Invincible, after Omni-Man suddenly turns murderous following the manifestation of Mark’s own superpowers, consisting of the same super-strength, flight and virtual invulnerability.

Before that final shocker however, Invincible does sometimes meander too much between being a heartfelt family drama and a more comic book-inspired superhero satire. The show’s humour in particular can be very uneven so far, especially due to how much it fails to blend with the very poe-faced, but otherwise charming and surprisingly down-to-earth Grayson family. The scenes between Mark, Omni-Man’s human identity, Nolan, and Nolan’s fully human wife, Debbie are all realized fairly well though, reasonably capturing the struggle of managing a teenager who is now manifesting superpowers at the tender age of 17. This is not unlike The CW’s recently-launched Superman & Lois series in that respect, though Superman & Lois obviously doesn’t have the benefit of a hard TV-MA rating that allows Invincible to be as brutally violent and unapologetically crude as it wants to be!

That final gut punch of Omni-Man murdering all of his teammates instantly helps to compensate for Invincible’s otherwise boilerplate, unremarkable origin story for Mark, which I have to imagine is intentional. Mark takes shots at super-villains and commissions his own super-suit, sure, but considering the overload of modern superhero media that we take for granted in this day and age, Invincible’s story definitely doesn’t excite all that much before its twist ending, least of all when it’s so openly invoking a lot of familiar imagery from DC especially. The show is well-animated though, and its action sequences are similarly impressive, as illustrated by an opening section that has Omni-Man and the Guardians of the Globe battling against a duo of super-strong, burrowing super-villains called the Mauler Twins, whom the Guardians of the Globe must keep out of the White House. 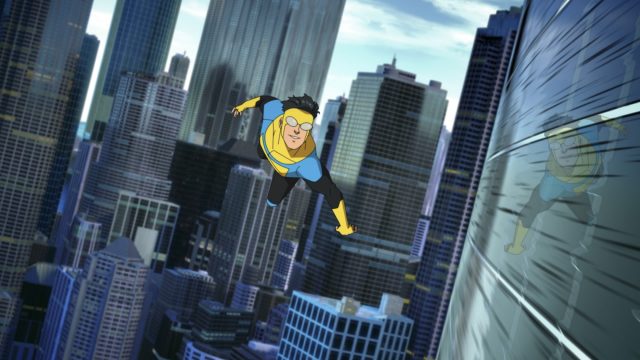 Invincible stretching its episodes to around 45-50 minutes in length is also pretty ambitious for an animated series, especially one that could have easily committed to being a full-bore, half-hour adult animation comedy, a la HBO Max’s Harley Quinn. There certainly is a lot of ambition behind Invincible overall, even as it meanders between being a coming-of-age drama, an irreverent satire of superhero comics, and an animated action spectacle on its own merits, without much consistency yet. “It’s About Time” at least delivers enough style and intrigue to keep fans of superheroes and adult animation alike invested for at least this first season though, which also provides the benefit of premiering Invincible’s second and third episodes alongside this first one. I’ll check back to see how those turned out, but for now, colour me intrigued, even if Invincible has to stretch a bit further before I’m truly impressed.