NOTE: Full spoilers for this episode of, “The Falcon and the Winter Soldier” are present in this review

With the series’ first episode having now established the state of affairs for Sam and Bucky separately, the second episode of The Falcon and the Winter Soldier can finally bring them together on a united mission against a new enemy. “The Star-Spangled Man” also performs double duty as a proper introduction to John Walker, the world’s newly-minted Captain America successor, who faces his own struggles with the legacy of former Captain America, Steve Rogers. Naturally, this show’s villains, the Flag-Smashers also continue their plot to restore a world as realized during the Blip, now foreshadowing the promise of another, more dangerous threat lurking in the background of their activities.

Now that they’ve finally been brought together to investigate the Flag-Smashers, Sam and Bucky inevitably face tension, as Bucky confronts Sam about handing off Steve’s shield to the U.S. government, following the events of Avengers: Endgame. This is where The Falcon and the Winter Soldier starts gradually trying to tailor itself as a buddy dramedy, attempting to position Sam and Bucky as an odd couple pairing that struggle to confront their inadequacy to succeed the legacy of the man they both looked up to most. The foundation is pretty entertaining at times too, especially when we get to see Sam and Bucky quickly thrown into another highly impressive action scene this week, after Bucky mistakes Flag-Smasher leader, Karli Morgenthau for a hostage of the radical group, resulting in a fight atop some Flag-Smasher trucks. It’s here where new Captain America, John Walker properly intervenes in events, complete with his own Falcon/Winter Soldier hybrid partner, Lemar Hoskins, a.k.a. Battlestar, another character that once took on the, “Bucky” identity in Marvel Comics lore. Long story there. 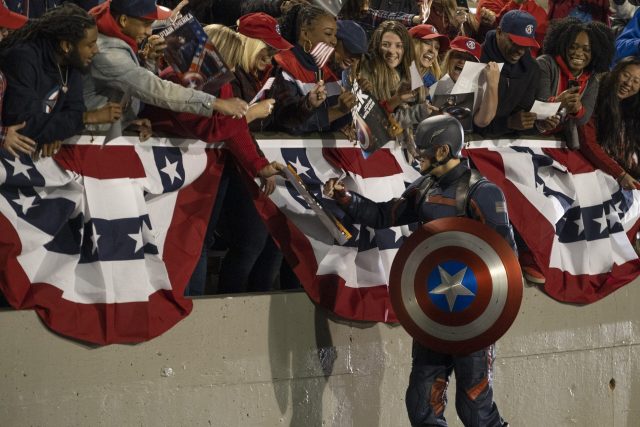 The introduction to John Walker is excellently done, beginning with a bombastic intro wherein Walker is invited back to his old high school football field for an interview with ABC’s Good Morning America, and eventually leading to Sam’s and Bucky’s dismissal and scorn towards Steve’s government-appointed successor. What works well in this respect is how Walker faces his own burden as Captain America, without just slipping into the role perfectly, or immediately abusing it. Despite having every advantage, from physical aptitude to money to military background and even to race, being a stereotypical blond-haired, blue-eyed Caucasian all-American hero, Walker’s many boons as Captain America are offset by their own concerns and their own prejudices. Just like Sam and Bucky, Walker is openly overwhelmed and reverent in the face of his new responsibility, having to put on a brave face for the camera and the government’s interests, though in reality, Walker is just as apprehensive about his ‘promotion’ as Sam and Bucky are.

This public perception-vs.-uncomfortable truth theme that runs at the heart of The Falcon and the Winter Soldier is also effectively explored after Sam and Bucky ultimately lose Karli and her thugs, eventually spurring Bucky to suggest visiting an old man named Isaiah Bradley in Baltimore. This is yet another recognizable Captain America Family figure from Marvel Comics lore, newly-realized in the Marvel Cinematic Universe, with Supergirl’s Carl Lumbly portraying Isaiah as an aged, world-weary super-soldier that hasn’t lost any of his incredible strength or fighting ability. Yes, that’s right; Long before the Flag-Smashers came onto the scene, Steve and Bucky were not the only super-soldiers to exist in the MCU! In fact, Isaiah’s history as an unknown Captain America successor has been all but scrubbed from public record, with only Bucky recalling Isaiah readily, since Isaiah apparently defeated Bucky’s Winter Soldier persona in the 1950’s, during the Korean War.

Isaiah’s introduction not only marks the latest tease for the eventual coming of the Young Avengers in the MCU, considering that Isaiah’s grandson, Eli Bradley, another Young Avengers member in Marvel Comics lore, appears to live with him, but also a chilling revelation that Abraham Erskine’s super-soldier program didn’t begin and end in the 1940’s. In fact, in Marvel Comics lore, Isaiah is the sole survivor of a collaboration between American, British and German genetic researchers, who experimented on Black soldiers in order to replicate and reliably mass-produce Captain America’s super-soldier formula. When these experiments were concluded, every test subject was then executed, with public record stating that they all died in battle. It’s a sobering, uncomfortable story, and the idea that Isaiah has a similar background in the MCU feels all too believable. Predictably, Isaiah has since become angry, dejected and resentful of his former history as a ‘hero’ as well, ultimately throwing Sam and Bucky out of his house in a fit of rage, and appearing to be downright insulted that Bucky would want to call on his help against the Flag-Smashers.

Moments like this exemplify The Falcon and the Winter Soldier as being the most chillingly grounded and thought-provoking that the MCU has dared to be since 2014’s Captain America: The Winter Soldier. You really have to respect showrunners, Malcolm Spellman and Kari Skolgard for once again trying to deepen the themes and commentary at play behind a more starkly humanized MCU storyline! In fact, if anything, Spellman and Skolgard are almost doing too good of a job raising questions and exploring ambitious themes in the writing and direction for The Falcon and the Winter Soldier so far, to the point where it currently feels distracting when the series suddenly tries to be a buddy comedy. For all of its great narrative ideas, The Falcon and the Winter Soldier hasn’t yet perfected its overall tone. This second episode may finally have Sam and Bucky interacting with each other at last, but it also fails to smoothly move between sobering commentary and faux-macho comedy, making its comedic moments between Sam and Bucky, from uncomfortable therapy sessions to a weirdly homoerotic tension that’s treated as a strange running gag, mesh poorly with the rest of the show’s storytelling at this point. 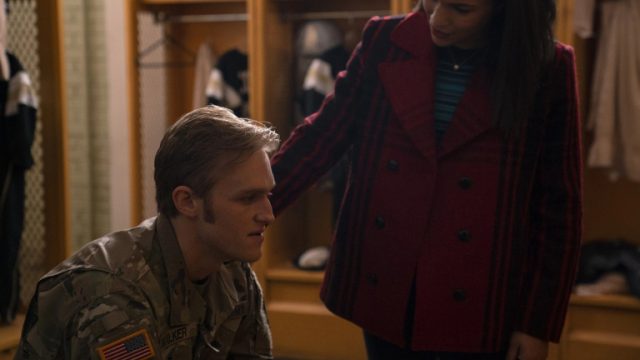 Fortunately, in firmly rooting themselves amid a fantastical, but still grounded conflict, namely the myriad refugee camps and suspended citizenry behind everyone that was returned from the Blip, the Flag-Smashers more consistently excel, especially considering that their leader is finally revealed as petite woman, Karli Morgenthau, a far cry from the hulking strongman that Sam and Bucky initially suspected was the leader of the group. Yeah, I’m not sure why The Falcon and the Winter Soldier even bothered with that misdirect, frankly, because it’s spelled out fairly quickly for the characters and the audience that Karli is the true leader of the Flag-Smashers, something that the marketing already more or less let slip in the trailers anyway. In trying to flesh out the dire living state of Central and Eastern Europeans especially in the post-Blip world however, Karli’s agenda does put another exciting puzzle piece into place, after she’s threatened by a mysterious person over her cellphone. Then, towards the end of this episode, Karli and her agents declare bluntly that they’re being hunted by someone called the ‘Power Broker’, a name with huge implications for the MCU!

I’d vouch a guess that one of the key objectives for The Falcon and the Winter Soldier in terms of the future projects it sets up for Disney and Marvel Studios is introducing the Power Broker to the MCU, a major player in Marvel super-villainy that has the potential to be a longstanding threat for the MCU’s earthbound heroes. As his moniker suggests, the Power Broker sells superpowers to anyone willing and able to pay for them (usually some variant of super-strength), and inevitably, he supplies some highly dangerous abilities to some of the most deadly earthbound villains in the Marvel Universe. While there have technically been two known Power Brokers in Marvel Comics canon, they both headline an entire corporation dedicated to empowering villains, one with quite a lot of resources! Naturally, if Karli has stolen the Power Broker’s product to strengthen her own faction of freedom fighters, the Power Broker would logically be pretty displeased.

It’s certainly a risk to seemingly undermine the lead antagonists of The Falcon and the Winter Soldier this early on, though Karli and the Flag-Smashers being re-framed as desperate Robin Hood-esque figures for those who survived Thanos’ Snap five years ago does help to make their characters more complex, and function as more than super-strong bruisers for Sam and Bucky to impotently try and smack around. Speaking of more complex threats, this episode also ends with Sam and Bucky ultimately rejecting an offer from Walker and Hoskins to work alongside them, instead aiming to consult incarcerated Captain America: Civil War villain, Helmut Zemo regarding Hydra secrets that could help put them back on the trail of Karli and her crew. This is already exciting, but Walker ending his failed proposal with a veiled threat also creates a lot to look forward to in the weeks ahead, as Sam and Bucky decide that they’d rather make an enemy of America’s interests than further disgrace the symbol of their greatest friend.

“The Star-Spangled Man” continues to have The Falcon and the Winter Soldier excelling off the back of its rich social and political commentary, in turn further bolstering the appeal and complexity behind the Flag-Smashers, and new Captain America, John Walker. We also get some really excellent teases for future MCU developments in this episode, namely that Karli has provoked the Power Broker in order to give her band of radicals their super-strength, and that an entirely unknown African-American super-soldier took up Steve Rogers’ mantle many decades before Sam was ever offered it, only to disappear completely from public record. The show’s tone is still a little wonky, and its comedy is noticeably faltering behind its drama for now, but The Falcon and the Winter Soldier nonetheless continues to prove that the MCU can explore big ideas as much as it can big spectacle. In fact, considering that WandaVision previously delivered its own subtle commentary on the evolution of female roles in society and women’s’ media influencing their self-worth, the MCU’s Disney+ series catalogue could prove to be the ideal home for live-action Marvel tales that want to provide a little food-for-thought to go with their innate blockbuster appeal.