NOTE: Full spoilers for the final two episodes of, “Superstore” are present in this review

NBC’s latest workplace sitcom sensation has come to an end. Superstore was a series I used to cover with enthusiasm, back when Eggplante covered syndicated sitcoms, and its first few seasons in particular were another slam dunk for a network that’s built a lot of its modern appeal to Millennials around the workplace sitcom genre. It’s especially bittersweet to see this minimum wage labour-themed series conclude right after a massive surge in popularity here in Canada as well, after the first five seasons of the show recently debuted on Canadian Netflix and Amazon Prime Video (you can also stream the sixth and final season early on Prime Video in Canada, if you happen to have a StackTV subscription!), where they quickly became a popular mainstay among subscribers aged 18-49.

That being said, in its efforts to try and adapt to a post-COVID-19-world, and to write around former lead star, America Ferrera leaving the show at the start of its final season, Superstore had undeniably lost a step. Suddenly, the biting edge of its minimum wage satire became a little too real, especially when the ensemble failed to gel quite as effectively without disenchanted supervisor, Amy Sosa among the cast. Frankly however, it’s still a little surprising that NBC was so eager to end Superstore despite these drawbacks, especially after they kept similarly successful, Millennial-skewing workplace sitcom favourites like The Office and Brooklyn Nine-Nine on life support past their prime (Consequently, NBC recently confirmed that they’ll also be ending Brooklyn Nine-Nine next year), even going as far as to quickly kill Superstore’s proposed spin-off, Bo & Cheyenne, according to Superstore series writer, Bridget Kyle.

For what it’s worth though, Superstore tries for a feel-good ending that otherwise complements a bittersweet, definitive conclusion to everyone’s time working at fictional big box store, Cloud 9. As many can no doubt predict, the series ultimately ends with Cloud 9 Store 1217, the setting of the show, being closed down, and ultimately converted into an alternate facility for new Cloud 9 parent company, Zephra. This means that just about everyone ultimately loses their jobs, though of course, this being a feel-good ending, everyone also finds a new place in the world in the process. Glenn decides to reopen his old family hardware store, in turn hiring Cheyenne and the undocumented Mateo to work with him there, Dina becomes the manager of Zephra’s new facility, and keeps on some familiar faces like Marcus and Justine, Garrett gets together with Dina in the end, and of course, Jonah and Amy do ultimately end up together, even having a child of their own in the long term.

All of this is realized during a two-episode series finale that mostly stays on the same gear throughout, thus meaning that I can pretty much address both of these episodes in the same review, rather than splitting them into two separate reviews, as I did with the series finale of The Big Bang Theory. That finale was spread across two separate episodes with very different storylines, and very different levels of quality. In Superstore’s case however, the show ultimately plays it pretty safe in both finale episodes, to the point where some resolutions do feel a little underwhelming. It’s definitely nice that Glenn got to defy retirement most of all, and that Mateo avoided deportation by being able to work for him. Likewise, Dina getting to keep living the manager high life under Zephra feels fitting. The twist of Sandra becoming Dina’s underling is also weirdly satisfying, allowing Sandra to finally get a win after years of comical adversity against Dina at Cloud 9. 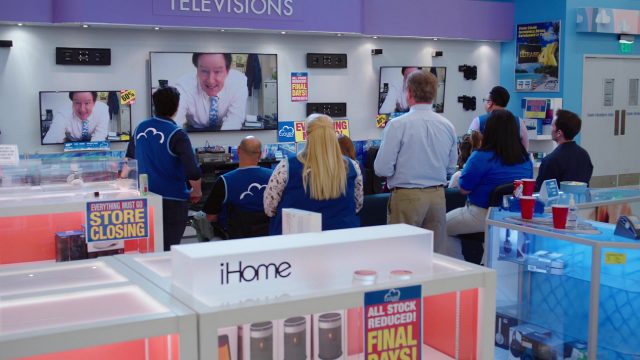 On the flip side however, wanting to keep things happy and upbeat during an otherwise grim situation also leads to some less satisfying, blatantly rushed character resolutions. The biggest among these is the typically fan-pandering romance between Jonah and Amy, which is re-addressed after America Ferrera returns for this series finale. Despite Jonah having a pretty decent thing going with Carol’s smart, attractive lawyer, Hannah, Jonah merely dumps Hannah off-screen with no explanation, so we can force a Hollywood ending between him and Amy. I guess everyone shipping ‘Jamy’ even after Ferrera left Superstore will at least be happy, but considering that Jonah and Amy are supposed to be the lead characters of Superstore, their ultimate marriage and settling down together is clearly hamstrung by having to write around Amy unrealistically quitting her Zephra job to move back to St. Louis, while Jonah finally stayed at his unfulfilling minimum-wage job just to be around Amy. Except, if Jonah is really as flighty as suggested, leaving 20-30 jobs on a whim, then why didn’t he quit immediately after Amy left? Logically, he should have.

Even if the pandering romance resolution is a little trite and forced though, Superstore does manage to send itself off with a few decent gags on the way out. The first half of this series finale, “Perfect Store”, has the Cloud 9 employees trying to impress a Zephra evaluator after a duffel bag full of severed feet is discovered in the store, which they try to hide with a bizarre display of soda boxes. It’s weird and non-sensical, but this vaguely dark gag is admittedly true to the unrewarding uphill battle that the Cloud 9 folks seemed to face on a daily basis over Superstore’s six-season run. The second half of this double episode, “All Sales Final” meanwhile has the Cloud 9 employees reckoning with losing all of their jobs, at which point Glenn discovers tapes of all of their job interviews. Admittedly, this is a very cute idea, and it fills in some amusing blanks with some of the show’s running gags, such as how Dina came to despise Glenn, and how Garrett talked his way into a job that he never had much interest in doing. 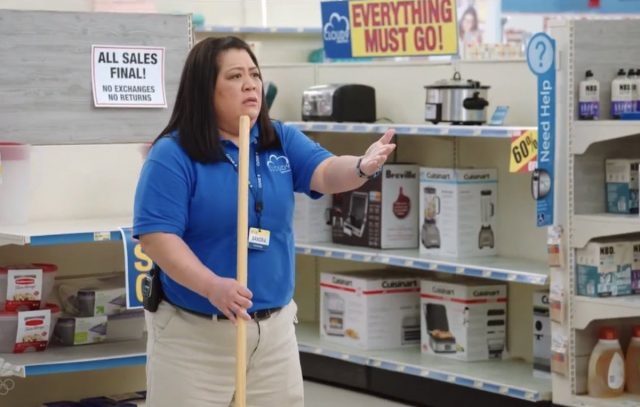 Still, everything ultimately ending with a ‘family barbecue’ montage, seemingly proving Garrett wrong about the Cloud 9 employees all going their separate ways after the store closure, goes to show that Superstore ultimately decided to play it safe over truly challenging its audience with its finale. Considering the dire state of our real world right now though, that was probably the right call, even for a series that’s usually not afraid to highlight existential dread over an unfulfilling corporate-ruled existence, much like The Office did before it. “Perfect Store” and “All Sales Final” may be a bit of an unremarkable ending to another fan-favourite NBC workplace sitcom, capping off an already compromised, shortened final season for Superstore, but it does at least put forth a commendable effort to make the characters’ seemingly aimless toils at Cloud 9 worth it in the end. Even many of the supporting employees like Sayid, Nia and Carol at least get to be part of that ending montage, if not receiving a proper send-off to go with it, plus, for better or worse, Jonah and Amy did get to live happily ever after in the end, however forced that might have felt.

In the end, another quirky sitcom work environment thus closes its doors. It’ll be that much harder to have a heavenly day with Superstore off the air, but at least I, and many others, have made a lot of lovable memories laughing with the Cloud 9 crew, certainly enough to tide us over until NBC inevitably launches its next celebrated workplace sitcom!