Hotline Miami has been an indie sensation on PC since last year, extending to Mac and Linux soon after. On computers, there’s no question; Hotline Miami is one of the most action-packed, addictive and satisfying indie games that you’ll ever play! It’s brutally difficult and un-apologetically violent, but as far as fast-paced action spectacles go, it doesn’t get better than this particular game! 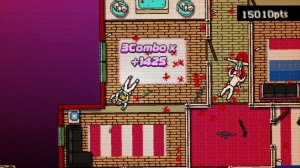 So, seeing as Hotline Miami is a game designed for play on your PC, one may ponder about possible compromises on different hardware. After all, how can one replicate playing with a mouse and keyboard on a console or a handheld? Short answer is, they can’t. Fortunately, developer, Dennaton Games has handled the PlayStation ports excellently, so it’s a non-issue anyway. Hotline Miami may still be most at home on PC, but it’s still a fantastic game on PlayStation devices!

If you’re unfamiliar with this little indie gem, Hotline Miami takes place in, well, Miami, Florida, circa 1989. As the unnamed protagonist, you continually wake up in your apartment to find ominous messages on your answering machine. Each message is different, but the aim is the same; Your mysterious handlers want you to go to some location, and kill everyone inside.

Presented as a top-down pixel art game, Hotline Miami almost appears as a representation of what something like Grand Theft Auto might have looked like in the NES era. Of course, there are no cars to steal, no diverse array of missions, nor any semblance of moral ambiguity in Hotline Miami. This game is about one thing; Murder. All you do is run through an area and massacre everyone. You aren’t allowed to leave each area until every poor soul inside it has been brutally killed by your own hands. 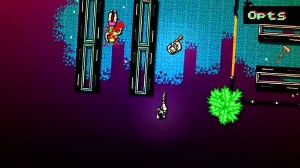 Reprehensible? Sure, maybe at first. Even in pixel art, Hotline Miami is almost squeamishly violent. Whether shot or bludgeoned or stabbed, enemies will always collapse in broken heaps, within a pool of their own pixelated blood. Limbs and heads casually fall off. Bodies are almost always contorted. Even just hitting someone with a nightstick will make it appear as if an especially vicious slasher villain got to them! The likes of Manhunt and Mortal Kombat would blush at some of this graphic violence, which likely only gets a pass because of the pixel art presentation.

Any remorse you may feel for your killing sprees however is quickly dampened by the points and score multipliers that pop up with every gruesome kill. As the game goes on, you start concerning yourself gradually less with the lives of your faceless victims, and the intentions of your equally faceless protagonist. Eventually, you revel in the violence. Hotline Miami becomes disturbingly transcendent in this respect, because by the final portions of the game, you’ll have become just as detached from brutally murdering your supposed enemies as your player character does.

Of course, even if your objective is very simple, your execution is anything but. As mentioned, Hotline Miami is a very, very tough game. Your enemies may die with a single bullet or clubbing, but so do you. You’re always extremely outnumbered and outgunned, forcing you to plan your route through each area very quickly. Even the slightest mistake will result in your character being killed, and forcing you to restart the area. 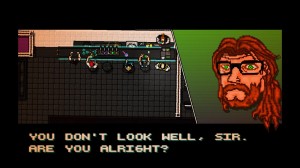 Fortunately, with a tap of the X button, you’re back in the game. Hotline Miami provides a checkpoint every time you clear a floor of enemies, so you’ll only have to restart a floor if you die, not an entire stage. Retrying is quick and easy, and the game even encourages you to be reckless. You’re awarded extra points for quick and dirty kills, and not only that, the superior speed and accuracy of your enemies means that playing carefully is rarely recommended. Trying to hide will probably just get you sniped by some unseen foe, forcing you to restart the area.

The frenetic, murderous pace of the slaughter makes Hotline Miami play out like some sort of deranged cocaine fantasy. The narration is intentionally unreliable, with much of the story being vague and interpretive, having multiple endings to boot. The presentation is also neon-drenched, trippy, and full of trance-style pixel/synth melodies that are stellar to listen to, especially if you plug in some headphones on Vita.

In fact, the presentation is heavily influenced by Ryan Gosling-starring crime drama, Drive, not counting the more surreal elements of Hotline Miami’s story. The movie’s director, Nicolas Winding Refn, is even thanked in the credits to this end.

Even if the game is still superb on PlayStation devices, it’s also true that, as with any cross-play title, Hotline Miami plays a little better on one platform over the other. In this case, the Vita version definitely has a leg up over its PS3 counterpart. 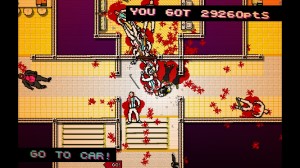 On Vita, you can easily tag targets by tapping them on the Touch Screen, plus the decreased, pixel-style resolution definitely feels more at home on the Vita’s smaller OLED screen. Needless to say, the effortless ability to take Hotline Miami on the go with Vita is also a big plus that even the PC version doesn’t normally allow so easily.

Mind you, this is still a great game on PS3, but the PS3 version has more compromises than its Vita counterpart. On a TV screen, the graphics often look poorly-defined and washed out. On top of that, you lose the advantage of Touch Screen-tagging, which now has to be done with an awkward combination of using the L2 button to scroll around (which is unstable and finicky, by the way), and tapping the Square button to hope you select the right target. In fact, the PS3 controls in general are a little frustrating and clunky compared to the smoother Vita controls. They feel too loose much of the time, and in a game that demands such high precision and quick reflexes, that can be a big problem.

Still, all things considered, Hotline Miami is another big success for the PlayStation Pub Fund program, even if the experience is a lot smoother on Vita versus PS3. Still, if you buy the Vita version, the PS3 version is free anyway, so that’s difficult to complain about. 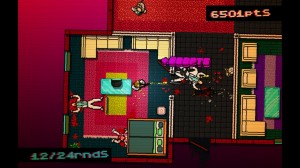 Both games also have a shared Trophy roster, which is a big plus, and ‘syncing’ your save data only takes a few seconds, and allows you to freely play your save file on either PS3 or Vita at your leisure, rather than having to bounce the data back and forth. It’s a great ported package that Dennaton Games has put together very well!

Even though the game is very short, and can be blown through in about three hours if you’re up to the challenge, Hotline Miami is a must-play game on Vita. Even if you’ve already played the PC version, the portable and intuitive Vita package will give you plenty of reason to revisit the game, especially since you can quickly and easily take it with you wherever you go now. If you’re a fan, it’s worth the second purchase.

PS3 gamers who don’t own a Vita have less incentive unfortunately, since the PS3 version offers no advantages over its PC counterpart. Seeing as Hotline Miami is readily available on Steam for the same $10 price (if it’s not on sale), and with very undemanding system requirements at that, you might want to stick with that version. The PS3 edition only really works well as an added perk for buying the Vita edition. If you’ve already played through the PC edition, the only reason you may want to play the game on your PS3 is for Trophies. Beyond that, there’s no reason to double-dip.

With a sequel coming to PC, Mac and Linux, there’s never been a better time to check out Hotline Miami! If you don’t have the means to play the game on PC, or are an avid PlayStation gamer that’s interested in these particular versions, the game itself is still awesome on PlayStation devices, the Vita in particular. If you love action gaming and are up for a great challenge, you will enjoy this game immensely!

Hopefully you’re not too squeamish though!