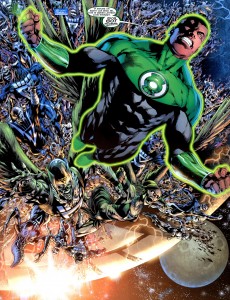 As promised for EVO 2013, Ed Boon and his team at NetherRealm Studios have drawn back the curtain on the fifth DLC character for their recent DC-themed fighter, Injustice: Gods Among Us. Surprising no one, the identity of this fifth character is none other than Martian Manhunter, the lone mainline Justice League hero that wasn’t featured as part of the initial character roster.

If you’re unfamiliar with the character, Martian Manhunter is the lone surviving member of an advanced society that lived on Mars, and a key superhero figure in the DC Universe. A shape-shifter, Manhunter operates on Earth with the human appearance and identity of John Jones, which resembles his Martian name, J’onn J’onzz. He is immortal, and possesses vast superhuman strength and agility, as well as flight, the ability to become invisible, communicate via psychic means, and, as if that weren’t enough, he also happens to be a brilliant deductive thinker, akin to Batman. Despite his numerous powers and abilities however, Manhunter has a severe vulnerability and aversion to fire.

Manhunter’s reveal comes with a trailer showing off his moveset, similar to the other DLC characters that came before him. That’s not all it shows off either! The character skin that NetherRealm head, Boon had claimed fans were clamouring months for was also revealed. Turns out the one he meant was an alternate Green Lantern skin, rendering the character as John Stewart, a fan-favourite Green Lantern. In the default roster, the Green Lantern for Injustice is Hal Jordan.

While a release window for this new DLC character and costume wasn’t given, it’s presumed that Martian Manhunter will sell for the same $5 price as the previous four DLC characters. Whether or not Season Pass holders can still download Manhunter for free is unverified at this point as well. Likewise, it’s unconfirmed if the John Stewart costume will be sold individually or as part of a pack, where it could range from anywhere from $1-$3.

Martian Manhunter joins Lobo, Batgirl, Mortal Kombat’s Scorpion, and General Zod, who are already available to download as bonus fighters for Injustice, currently available for Xbox 360, PlayStation 3 and Wii U. A Game of the Year edition that includes all of the DLC on-disc is rumoured to be coming to the same platforms, and also to PC and Vita, though the existence of this rumoured re-release has not currently been verified by NetherRealm, Warner Bros. or DC Comics at this point.

Regardless, continue to keep your browsing Watchtower on Eggplante for all of your news on Injustice!