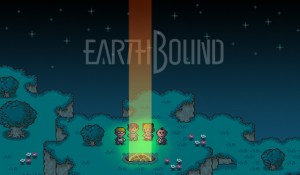 It’s about time! Nintendo has recently announced that the much-loved SNES classic Earthbound, better known to some as Mother 2, has finally made its way to Wii U’s Virtual Console. Earthbound enthusiasts rejoice!

If you’re not familiar with the game (tsk tsk!) this was probably one of the finest examples in the JRPG genre. Released in North America on the SNES in 1995, Earthbound not only offered addictive gameplay, an outstounding soundtrack and a compelling, emotionally-gripping story, it also changed the we thought of the genre, and was one of the deepest and most aware games of its time despite also being one of the strangest (in a very good way, I might add!).

Earthbound is available now on the Wii U Nintendo eShop for $9.99 for your gaming pleasure. Don’t forget, you can play both on your TV and remotely on the GamePad as well!

So what are your thoughts about Earthbound‘s re-release?  Pining for Mother 3 to finally be released in North America? So are we!  Let me know in the comments below!