You may ask, why bother reviewing a movie that I caught so late in its theatrical run, and after it obviously failed to turn a profit for Disney? Well, simply, because this movie should have gotten more attention during its time in theatres. The Lone Ranger could stand as one of 2013’s most underrated blockbusters, so long as you understand the finer workings of its sometimes tonally odd presentation.

If you aren’t familiar with this legendary radio serial franchise, The Lone Ranger is about masked Wild West vigilante outlaw, John Reid, and his Native American sidekick, Tonto. It was basically a very, very early precursor to our modern superhero media back during the early 1930’s, before Superman and Batman were even properly invented to kick off superhero demand. 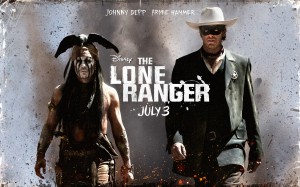 Obviously, numerous film adaptations of this beloved character already exist. 2013 marks the largest and most ambitious of the lot, and not simply because of the modern production value either! Disney went all out with this particular movie, bringing in Pirates of the Caribbean veterans, Jerry Bruckheimer as producer, Johnny Depp as lead actor (despite playing Tonto) and Gore Verbinski as director. The budget even ballooned past a whopping $225 million, going as far as to indefinitely delay the movie to get finances under control at one point! Truly, this was a massive gamble for Disney, and unfortunately, one that didn’t really pay off in the slightest.

It’s a shame too, because the movie is actually quite good, if you keep an open mind and give it a chance. It’s got a finely-polished mix of action, drama and even some great humour, it looks fantastic in terms of atmosphere and costume work, and you can tell that it was made with a lot of love for the source material. You do get the impression that Disney is just trying to make the Old West version of Pirates of the Caribbean at times, but when the movie is this entertaining, it’s really difficult to care.

The story re-interprets some elements of the character’s origin, but is otherwise surprisingly faithful to it. The main change is that John Reid (Armie Hammer), who would become the titular character, is now a prim and proper attorney, no doubt a tongue-in-cheek spoof of the character’s excessively polite speech in the radio serials. Tonto is also initially annoyed by Reid’s presence, omitting the origin element where Reid saves Tonto’s life. Instead, the two start out as foils to one another, with Tonto only teaming up with Reid at the behest of a ‘spirit horse’.

Before you ask about that, allow me to elaborate; Part of trimming the colossal budget of The Lone Ranger was to omit a key story arc that utilized supernatural elements. Originally, the movie was supposed to incorporate werewolves and other such gothic elements, but these had to be dropped to try and reduce costs. The ‘spirit horse’ is a leftover of this eliminated story arc, as is the cannibalistic tendencies and demon association of one of the movie’s main villains, Butch Cavendish (William Fichtner), who was also the original nemesis of the character in the serials.

Anyway, while this is the first time that the character has existed in a PG-13 setting, making for a much grimier and more gruesome movie than the clean-cut, kid-oriented serials of old, the famous fundamental rules of the Lone Ranger as a character are never betrayed, even if they are re-interpreted. He still uses silver bullets, he’s still polite, he still refuses to drink, he still never uses lethal force (though Tonto does), and he still never escapes a logical defeat. It’s a fine example of how to make a worn set of character traits endearing and fresh with a new spin, without actually changing them. Armie Hammer plays the part quite well to boot!

Johnny Depp’s predictable quirkiness is left to run to a degree, but is still kept on enough of a harness to avoid derailing the rest of the movie. The whole movie exists as a geriatric Tonto recounting the story to a small child at a fair, and, as you can imagine, he’s an unreliable narrator. Scenes of monstrous animals, bizarre escapes and seemingly spiritual madness are no doubt a product of Tonto’s confused and quirky imagination, a running joke that will likely be lost on most audiences. Still, it makes for a clever way to tell the story, and it allows the movie to make proper use of its Johnny Depp investment.

With the PG-13 rating does come a greater sense of action and violence than the Lone Ranger’s character would have delivered beforehand. As with Gore Verbinski’s original trilogy of Pirates of the Caribbean movies, the entire movie is very gritty and grimy, not afraid of bloodletting and a general sense of unpleasantness in some of the darker scenes, even if it never fully veers into R-rated territory.

The movie is also far less shy than the serials when it comes to bringing up the more scandalous side of the Old West, with the duo even visiting a brothel as a key location, run by Helena Bonham Carter’s gun-legged Red Harrington. Fun fact, this is the first time that Johnny Depp and Helena Bonham Carter have starred in a movie together that wasn’t directed by Tim Burton!

Of course, the style wouldn’t mean anything if the action wasn’t shot well, and believe me, this is a highlight! The action sequences are not only extremely well-shot, but also incorporate the perfect blend of action and comedy to keep them wholly entertaining. Every action sequence is a treat, since they’re all varied, unpredictable and often resolve themselves with the most surprising of turns.

Again, it’s an effective use of having Tonto be an unreliable narrator, since he’s free to exaggerate and quirk up the action without making it seem like the movie is tonally confused all the time. Granted, there are times where it jumps awkwardly between uncomfortable horror elements and goofy comedy rather jarringly, but they’re infrequent and minor.

Even with the scattered leftovers of a supernatural storyline that never happened, the plot is also well-constructed and surprisingly clever throughout most of the runtime. It has a bit of a twist in the middle as well, leading to a very effective climax that’s not only full of the most enjoyable action seen on the big screen all year so far, but also intentionally reminiscent of the classic serials. Yes, it is possible to guess the twist, and chances are, it was spoiled for you if you kept up with the movie’s production, as I did. Still, it’s nice to see that, as far as being a Western goes, The Lone Ranger is not a movie that feels the need to be bogged down by cliches.

That’s really the tragic thing too; Westerns just don’t seem to make any money, nor get any attention anymore. Despite several attempts at reviving the genre, between genuinely good recent remakes of 3:10 to Yuma and True Grit, and unfortunately ill-realized genre mash-up, Cowboys & Aliens, it just doesn’t seem like modern audiences care about Westerns anymore. Even if The Lone Ranger is so easily praiseworthy for its creativity and general sense of fun, perhaps it was doomed to fail from the start, especially with its out-of-control budget pretty well cementing that it would never turn a profit.

I implore you however; If you missed The Lone Ranger in theatres, don’t miss it when it arrives on home viewing. The dismal box office intake pretty well obliterates any potential hope for a sequel (which the conclusion does lay the groundwork for), which sucks, because The Lone Ranger is probably the most surprisingly creative and inspired movie that Disney and Bruckheimer have collaborated on in quite a while. Whatever your preconceptions about Westerns, it’s one of the year’s most underrated movies, even though it shouldn’t be.

This movie had no reason to fail at the box office. It did just about everything right as an adaptation of a beloved character. Like last year’s unfortunate John Carter, it’s another overly ambitious vintage adaptation from Disney that just didn’t seem to catch on with today’s moviegoing audiences. These are the most frustrating movies to experience, not because they didn’t do some property justice, but that they did do said property justice, and yet they weren’t rewarded for their hard work and dedication.

Sometimes, Hollywood isn’t fair. If you take anything from this review though, it’s that The Lone Ranger should be seen and enjoyed at some point, even if it’s on home viewing. It’s a very pleasant surprise, and it’s a strong blockbuster that shows just how much fun a good audience-friendly Western can be! 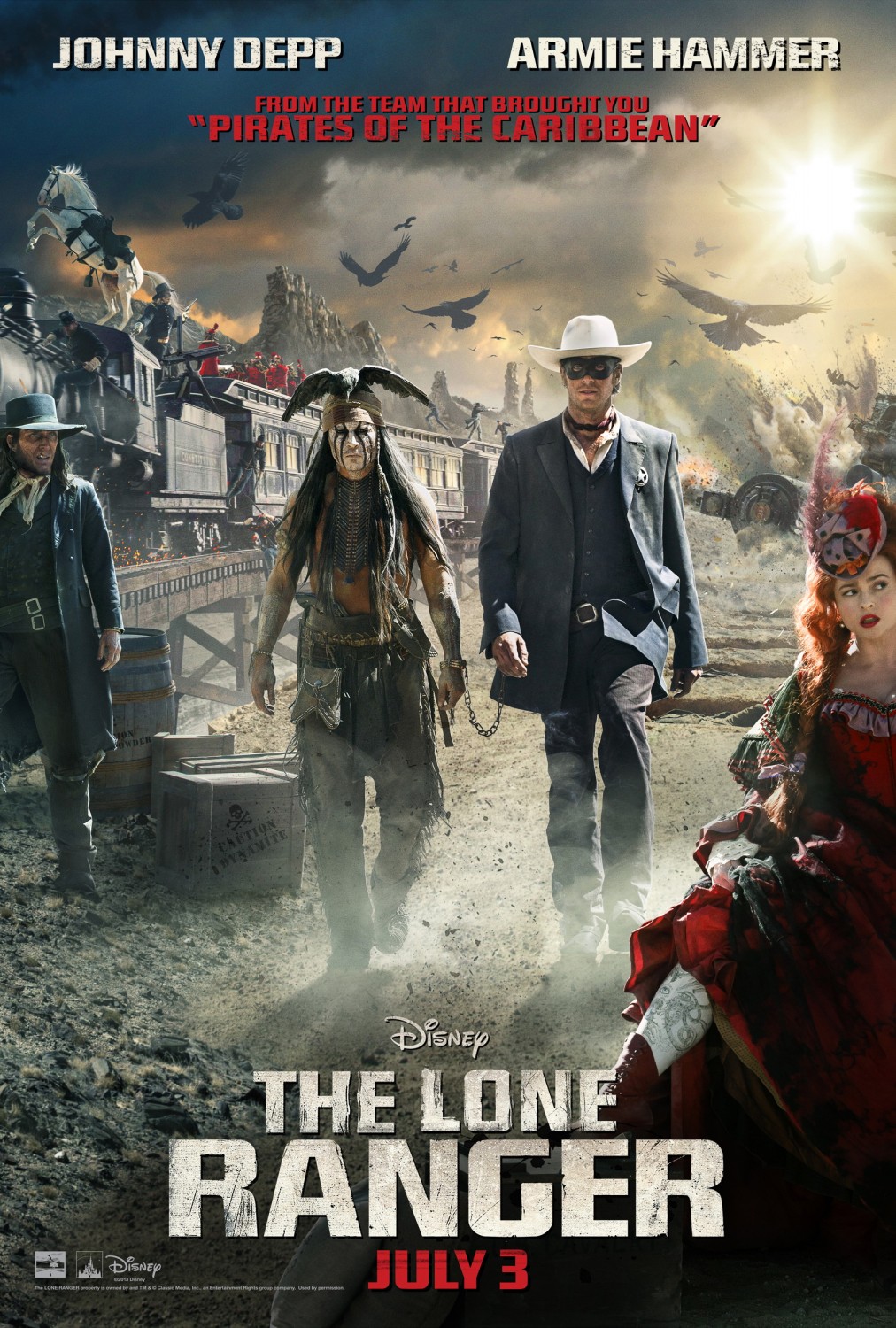