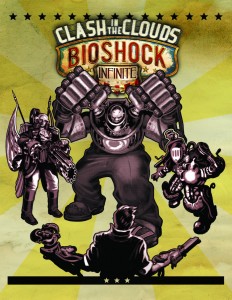 If you’ve already played through BioShock Infinite (and it’s highly recommended you do, as it’s one of the top-rated games of 2013!), you’re no doubt anxious to see what the planned DLC element has to offer. Well, lead BioShock designer, Ken Levine has just confirmed what to expect!

In a two-pronged DLC announcement, following a weekend tease, Levine has confirmed two separate offerings of BioShock Infinite DLC. The first is ‘Clash in the Clouds‘, a set of challenge-based maps that will test players’ combat capabilities. As Levine promised, it is single-player-focused, and will not introduce a multiplayer component to BioShock Infinite, after it promised to never include any kind of multiplayer functionality during development. Despite this, the DLC will include Leaderboards to compare scores with other players.

The second DLC announcement will really grab fans’ attention however, that being ‘Burial at Sea‘. Burial at Sea is divided into two parts, and, as you may be able to deduce from the title, it’s bringing BioShock Infinite’s lead characters, Booker and Elizabeth, to none other than underwater city, Rapture, the setting of BioShock and BioShock 2! BioShock Infinite, chronologically a prequel set in 1912, moved the setting to high-flying steampunk city, Columbia. To avoid major BioShock Infinite story spoilers in case you haven’t played all the way through the game yet (Reporter’s note: I still haven’t), we’ll leave the details at that.

Clash in the Clouds is releasing today, Tuesday, July 30th, for $4.99 on Steam and the PS3’s PlayStation Store, and 400 Microsoft Points on Xbox Live Marketplace. If you’ve already purchased BioShock Infinite’s Season Pass however, Clash in the Clouds won’t cost you a penny! 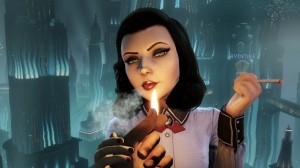 Burial at Sea is currently without a release window for either episode, though the first episode of the two is said to be entering its internal beta phase at developer, Irrational Games. Irrational doesn’t expect these story-focused DLC expansions to be ready until 2014, so fans will have plenty of time to speculate about them. Like Clash in the Clouds, they’ll be free to anyone who has already bought a Season Pass.

BioShock Infinite has been available since late March of this year, on PC, Xbox 360 and PlayStation 3, with the PlayStation 3 version sporting optional support for PlayStation Move as well. The game has been met with high critical and community acclaim, so if you have yet to purchase it for yourself, we extensively recommend that you do so, particularly with these very promising DLC expansions to consider!

Eggplante will be continuing to salvage all of your BioShock news, as we can unearth it!