Things are looking really bad for the Wii U right now…

Nintendo’s troubled new console moved just 160,000 units worldwide during Q2, or between April and July in layman’s terms. To add perspective to that sad number, the Wii U was outsold by not only the Xbox 360 and PlayStation 3, but also its last-gen predecessors, the Wii and DS. Yikes.

This really isn’t surprising, as Nintendo has continued to struggle with selling the console since its launch last November. Since the launch window, only a couple of noteworthy games have made it to Wii U, and of those, only March’s LEGO City Undercover was any good. Mind you, LEGO City Undercover is in fact very, very good, and perhaps the best original exclusive in the Wii U library so far, but one game alone can’t sell an entire platform, especially to naysayers.

Nintendo still has time to turn the console’s fortunes around however. Starting next week, a big triple-A offering will come to the Wii U every month for the remainder of the year, published by Nintendo. Pikmin 3 releases this Sunday (and has already earned rave reviews), with The Wonderful 101 to follow in September, The Legend of Zelda: The Wind Waker HD in October, Donkey Kong Country: Tropical Freeze in November, and Super Mario 3D World in December. Scribblenauts Unmasked and Sonic: Lost World are also being released exclusively for Nintendo platforms this Fall, beyond Scribblenauts Unmasked’s PC port.

Beyond that, the console will be seeing casual fare like Wii Party U and Wii Fit U before the end of 2013. Several high-profile third-party games for Q3 and Q4 will also be receiving Wii U ports, including Batman: Arkham Origins (even if it will be missing its recently-announced multiplayer mode on Wii U), Assassin’s Creed IV: Black Flag, Watch Dogs, Call of Duty: Ghosts, Splinter Cell: Blacklist, Deus Ex: Human Revolution – Director’s Cut, and once Wii U-exclusive Rayman Legends, which will be maintaining several exclusive perks on Wii U that are unavailable in the other builds. 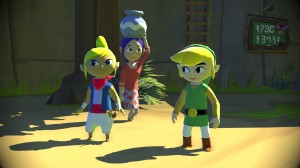 In the wake of these depressing sales numbers, some U.K. retailer chains have refused to stock the Wii U, while Wal-Mart has apparently slashed $100 off of the price of the console’s Basic Bundle. Despite this, other retailers have lept to the platform’s defense, claiming that sales will pick up once the big exclusive offerings start arriving in the Fall and Winter.

Most notably of these is Gamestop, who aggressively disputed claims that the Wii U will be drastically outsold by the competing PlayStation 4 and Xbox One this Fall and beyond. Gamestop argues that Holiday and Winter shortages are extremely likely for PlayStation 4 and Xbox One, limiting next-gen sales from the get-go, and this evidence is heavily supported by both consoles no longer accepting pre-orders at most retailers. The Wii U on the other hand will have a much more readily available supply.

Gamestop contends as well that the lower price point of Wii U will be more attractive to budget-conscious and family audiences. They also claim that Wii U will have the advantage of having more high-profile exclusive games than PlayStation 4 and Xbox One this Holiday, which is objectively true. Both PlayStation 4 and Xbox One have some promising next-gen exclusives in their launch lineup, but it’s also tough to argue that most of their launch offerings include ports of games also releasing on current-gen platforms.

It wasn’t all doom and gloom for Nintendo’s Q2 earnings report however! Nintendo joins the likes of Take-Two in being among the handful of publishers to successfully turn a profit for Q2, seemingly miraculously, even with Wii U’s dismal sales! Ubisoft and Capcom recently reported losses for last quarter most notably, among other publishers.

The Big N was kept well afloat by the continued surging sales of their current handheld, the 3DS, as well as last-gen sales of the Wii and DS. Likewise, Nintendo has enjoyed another banner year for 3DS software releases so far, between critically and commercially successful hits such as Fire Emblem: Awakening, Luigi’s Mansion: Dark Moon, Donkey Kong Country Returns 3D, and Animal Crossing: New Leaf.

Nintendo’s Holiday fortunes are sure to be sound regardless, particularly on 3DS. The 3DS will no doubt see an even more massive sales spike in October, given the landmark worldwide releases of Pokemon X and Pokemon Y, which will have accompanying hardware bundles in at least Japan. The Legend of Zelda: A Link Between Worlds, Mario Party 3DS, and Sonic: Lost World will also likely continue to drive healthy 3DS revenue this Holiday, among a couple of third-party offerings like Batman: Arkham Origins – Blackgate and Scribblenauts Unmasked.

We agree that the Wii U should see higher sales this Holiday, between having a larger availability, a lower price and a greater selection of established games than the competing PlayStation 4 and Xbox One, as Gamestop claims. 2014 will hopefully see more improvements to the console’s fortunes as well, since several high-profile core gaming exclusives are headed to the platform next year, including: Bayonetta 2, Mario Kart 8, X, Super Smash Bros. for Wii U, and, naturally, the inevitable batch of surprise titles that Nintendo will no doubt announce over the next several months, via their Nintendo Direct presentations and such.

For the Wii U, things look pretty awful, but for Nintendo themselves, things are still looking plenty peachy, especially on the 3DS end. The year isn’t over yet either, and the Mario Maker certainly has ample months to turn the Wii U’s 2013 fortunes around. With so many game publishers frequently in the red, including Sony and Microsoft more often than not, it’s nice to see that Nintendo’s resilience continues to serve them. Nintendo hasn’t been afraid to be candid about their mistakes either, recently admitting that they underestimated the scale of HD game development. It certainly appears they did…

So, while Wii U sales have hit a record low, it’s still too early to write off the platform as a failure, and even if it ends up a failure in the end, it’s nowhere near enough to bankrupt Nintendo, despite what some naysayers seem to think. The Big N still maintain many billions of dollars in their savings accounts, and that’s not even including security bonds! They’ve also been calculated to maintain multiple times the net worth of the biggest publishers in the West even now, including EA, Activision and Ubisoft. Put simply, Nintendo will be just fine, even when the Wii U isn’t.

Have you bought a Wii U? Are you frustrated by the low sales numbers of Nintendo’s new console? Do you think Nintendo is really in trouble with the PlayStation 4 and Xbox One on the way, even amidst massive 3DS sales? Leave your comments below…

In the meantime, Eggplante will keep you updated on the Wii U and other gaming platforms, as they develop.