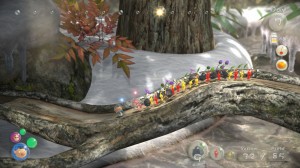 Nintendo has always excelled at bringing fantasy worlds to life. Growing up, one of my favourites was Pikmin, a game series so simple yet surprisingly complex in scope. It invited us into a surreal world so much like our own, while completely alien to anything we’ve ever experienced. It’s not often that Nintendo takes that jump into a new series and does so with such gusto. While only two games in, the selfless little lifeforms, Pikmin, have quickly become loveable icons of the company.

It’s amazing to see such growth from so little, but that just goes to show how remarkable the series really is. It’s a series that, while on the back-burner throughout the Wii’s life cycle, still remained a cult favourite. And instead of getting lost in the dust like many so often do, the Pikmin series strived to stay afloat and charm fans with its unique gameplay and creative environments.

This is where Pikmin 3 comes into play, a much-anticipated game from a much-loved series. Thinking back, this means there was nearly a nine year hiatus since Pikmin 2 was released, which is both mind-boggling and oddly refreshing. Nintendo loves to go above and beyond with sequels and spin-offs, but the closest Pikmin ever got to that was a re-release of both Pikmin 1 and 2 on the Wii making use of the system’s motion controls. It was a rather modest decision on Nintendo’s part, but one that solidified the integrity of the series and kept it so true to its original vision. 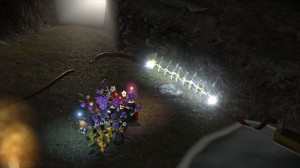 Pikmin 3 carries on with this tradition and expands upon what we loved so much about the series, especially its beginnings. This new instalment is much more a sequel to Pikmin 1 than it is to Pikmin 2, and takes on more of the classic elements of the series than experimental elements in the sequel. While I was disappointed certain enemies, items and other features from Pikmin 2 didn’t make the cut, Pikmin 3 is still very much its own game and branches forward in some interesting ways.

This time around, a trio of interstellar explorers (Charlie, Alph and Brittany) crash-land on an unknown planet inhabited by our plant-like friends, Pikmin. With their help, the explorers must forage for food to both sustain themselves and their home world, which is suffering from a serious food shortage. One thing I love about this series is how self-aware and in control it is, despite always having a serious survival story, Nintendo somehow makes it as light-hearted as ever. The tension and danger are always there, but in the cutest, most comical way possible.

Now that we have three explorers in command, you can control all three at once, expanding your multitasking potential. While this opens up plenty of opportunities throughout each environmental puzzle, it also poses some great risks and will require some time and patience if you plan to come away alive. The experience is just different enough to pose a new challenge, while still being familiar territory.

As for the Pikmin themselves, there are a few new ones you’ll want to take note of, particularly Rock and Winged Pikmin. As usual, each adds their own tactical edge and provide a little extra strategy to each puzzle. Sadly, Purple and White Pikmin are nowhere to be seen in campaign mode, however these two new types make a wonderful, and helpful, introduction to the series.

Rock Pikmin, for instance, are total powerhouses with their strong defence and have the ability to break armour and dizzy foes. The trade-off is that Rock types can’t latch onto their foes like other types can so deal those heavy hits and break those defences beforehand. 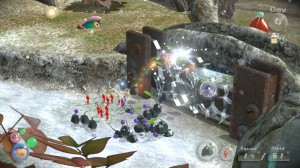 Winged Pikmin, on the other hand, are about as passive as they come and can glide over obstacles and environmental hazards. They have an ability no other type can offer, yet are severely-underpowered because of it. While they may lack in attack (unless we’re talking about bird-bees, they will outright murder them) Winged types are best saved for those crucial moments and will easily become one of the most important Pikmin on your team.

Rock and Winged Pikmin aren’t the only ones worth noting, the original types have also gotten some tweaks to further your experience (well, except for Red but they’ve always been a powerful mainstay). Yellow types now have conductive abilities, can dig faster than others and can, once again, throw bomb rocks, while Blue types have finally (I couldn’t stress it enough) learned how to swim, offering more engaging combat.

Now for one of my favourite parts about this game: boss battles. Need I even mention how awesome Pikmin 3‘s bosses are? In true Pikmin form, these bosses ensure you make full use of each type’s unique abilities. They keep you on your toes and are always worth a replay, even if only to experiment with a different tactic. There’s something so rewarding about the intense experience these boss battles offer and make even the most frustrating moments that much more worthwhile.

Pikmin 3 also features quite a few co-op stages worth checking out including Boss Rush, five treasure hunting stages, five monster-hunting stages and twenty Bingo Battle maps. These are all fun mini-games to play during some downtime from the campaign, plus these sections are the only places you’ll find the White and Purple Pikmins from Pikmin 2.

In terms of other changes made, Pikmin 3 once again features a time limit like in the first game. It’s not necessarily a feature I enjoyed (I like to take in my environments as much as I can), but that time limit can be extended depending on how much fruit you’ve collected.

Another new feature, and one that has received some criticism, is that Pikmin can no longer be moved manually like in past games. Instead, you now lock onto a target and command your team in one go, giving you one less step and more time to strategize. It may remove that sense of individual control, but it makes for more “natural” or “realistic” behaviours from the Pikmin.

Using the GamePad as your controller is another feature that takes some getting used to (but isn’t a necessity, you can also use the Pro Controller, Wii Remote Plus and Nunchuk as well). At first, maneuvering your team can seem a little clunky, but it’s all a matter of getting used to the system and taking advantage of its map component (plus, off-TV play is great). Before you know it you’ll be venturing forth as though nothing had changed.

It’s not often that you have a sequel as special as this. While Pikmin 3 focuses most of its attention on the first Pikmin game, it does so in probably the most in-depth, elaborate way possible and makes for a fulfilling experience from beginning to end. There’s never a dull moment when playing this wonderful little gem so relish it because who knows when we’ll get another quite like it? 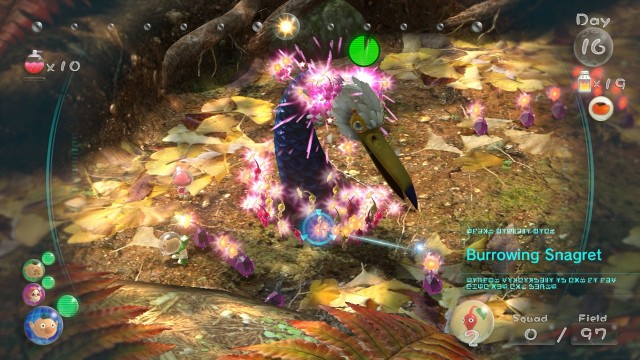