We’re the Millers is a comedy that will mean many things to many people. What’s objective about it is that it’s an R-rated road trip comedy that’s meant to be something of a parody of Vacation-esque family trip comedies. It also boasts a refreshingly original premise, not unlike Warner Bros.’ own The Hangover and Horrible Bosses from prior years. The rest will either amuse or disappoint you, depending on your expectations.

Allow me to set the proper expectations for you, as you may misunderstand what this movie is going for if you just hear the premise, or watch the trailers.

First and foremost, this is not a stoner comedy! Yes, it’s about drug smuggling and the main character is a pot dealer, but Jason Sudeikis’ David Clark (under the false name, ‘David Miller’ for most of the movie) is always quick to remind characters that he’s not a hard drug user; Just a lowly pot dealer. It’s no doubt intentional on the part of the writers, because the movie was clearly never intended to be a stoner comedy. Thus, don’t walk in expecting a stoner comedy, mmk?

Second, even though the movie is R-rated, and Jennifer Aniston portrays a stripper named Rose, reuniting with Sudeikis after the two starred in Horrible Bosses back in 2011, there isn’t a whole lot of sex humour. Well, ok, there’s some, but there’s no nudity, no low-brow sexual references, and virtually nothing you couldn’t see in a PG-13 movie, beyond one gag involving oversized, spider-bitten testicles. Don’t ask. 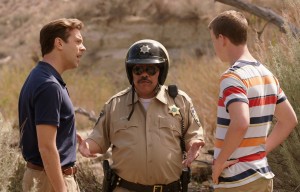 So, where does that leave We’re the Millers then? Well, as far as being an R-rated comedy about drug smuggling, fraud and running from violent criminals, it’s actually surprisingly… Breezy. No, I’m serious. If you have an older family that is looking for a light-hearted romp and doesn’t mind some f-bombs and phallic humour, this is for you!

If you take We’re the Millers from that direction, then you should be satisfied. The movie’s humour doesn’t really have a lot of teeth, and it almost feels like a family comedy masquerading as an R-rated adult comedy, which may have well been the pitch in the first place. Some of the jokes are so cartoonish that you have to wonder why the filmmakers even went for an R-rating at all, such as in an early scene advertised in the trailers where Ed Helms’ drug boss brags about buying an orca that eats dolphins. Again, don’t ask.

Of course, if you are expecting actual biting, dark humour, you’re not going to get it. Even when it looks like you’re about to get it, such as when the movie brings in an eccentric, swinging RV-driving couple (played by a scene-stealing Nick Offerman and Kathryn Hahn double act), the movie pulls back and tries to keep everything light-hearted. Even a highlight gag involving kissing lessons with virgin Miller ‘son’, Kenny (Will Poulter) doesn’t bother straying into much of shocking territory. It always pulls back before it can. It’s like We’re the Millers is strangely terrified of actually offending people!

At the very least however, the cast look like they’re having fun. The ‘Millers’ all have fantastic chemistry, which is what prevents the movie from becoming too tedious, even when you can’t help but roll your eyes at some of the hijinx that is tossed into the trip to keep the plot moving. Of course, not every joke works on that note, and it feels like the writers were more in love with the premise of the movie than the plot itself.

Despite that however, I can’t really dislike We’re the Millers. It’s just so oddly charming, even with its faults and lack of comedic teeth. It’s almost endearing in a strange way, even when it’s dropping profanities and tossing (unused) marijuana all over the place! It may not ultimately elevate itself above the likes of The Hangover or Horrible Bosses, but it’s still funny in its own right, even if it doesn’t do much to earn its R-rating.

A negative person could thus call We’re the Millers a wasted opportunity. A positive person like myself however could instead call it good enough to recommend for those interested, but with proper expectations. Just because drugs are a key plot point doesn’t make this a stoner comedy. Likewise, just because there’s an R-rating doesn’t mean that the movie is going to be full of T&A and gross-out gags, beyond that thing with the spider that was given away in the trailers anyway.

If you just want a breezy, undemanding comedy then, We’re the Millers delivers. It’s got some solid chuckles and some sharp comedic performances from all of the leads. At the very least, you can certainly say that it’s original too, even if it could have ultimately done with being more memorable.