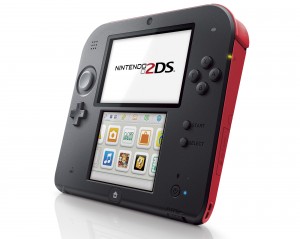 Nintendo greeted its following with heaps of news today, but no announcement was more shocking and controversial than that of the 2DS! A revision of their current handheld, the 3DS, the 2DS is a discounted, tablet-like 3DS design that maintains all of the handheld’s capabilities, sans its 3D effect, of course.

Nintendo is describing the 2DS as an ‘entry-level’ handheld, specifically citing its potential for younger children who want to play games, but who aren’t recommended for the 3D effect, said to be only suited for players aged seven and up.

Nintendo also cites that the 2DS is a viable option for budget-conscious consumers who want to enjoy the 3DS library of games like Mario Kart 7 and Animal Crossing: New Leaf, but who find the current 3DS models too expensive, and could care less about playing in 3D. Like the 3DS and 3DS XL, the 2DS will also be backwards-compatible with all DS games and DSi software, on top of the 3DS and 3DS eShop library of games.

The 2DS is doing away with the clamshell design of the 3DS and 3DS XL, instead resembling more of a tablet. Since you can no longer close the device, you instead use a separate slider to put it into Sleep Mode. There’s also only one speaker this time, playing mono sound, but full stereo sound is supported if you plug in headphones. The 2DS will still support wi-fi capability as well, both online and local, will still have access to the 3DS eShop and its line of games, and will still support StreetPass and SpotPass capability. You will need to turn the wi-fi on and off through the system options now, rather than just flipping a switch on the side like the 3DS and 3DS XL however. 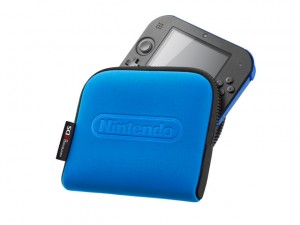 Nintendo seemed to foresee the controversy in announcing this addition to the 3DS hardware selection, and they were immediately ready to stress that they are not in any way abandoning the current launch model 3DS, currently retailing for $169.99, nor the revised 3DS XL, currently retailing for $199.99. They’ve also claimed that this is not an indication that the company is abandoning 3D gaming, at all. All 3DS games are still planned to support 3D for the 3DS and 3DS XL for the foreseeable future.

Many people have expressed shock and horror at the 2DS announcement anyway, particularly given the onslaught of backpedaling that Microsoft recently went through with their upcoming Xbox One console’s initial policies, and Sony’s well-publicized failure of their UMD drive-less PSPGo a few years back. The fact that the 2DS is designed to resemble a tablet, ditching the clamshell design that’s been in place since the launch model DS back in 2004, hasn’t helped matters, particularly given the critiques on smartphones and tablets infringing on the dedicated handheld market.

Before you fly off the handle too much however, let’s just stop and think about this for a moment! The 2DS is actually a great idea, and we get what Nintendo is trying to do here! Think about it:

For starters, the handheld is only $129.99. If you want to introduce your small child to handheld Nintendo gaming and don’t want to throw too much money at a system they may just break or neglect, it’s a good deal, especially given the seemingly sturdier, child-friendly build.

It’s also a great deal if you don’t care about playing in 3D, and just want a cheaper, more cost-effective way to access the 3DS game lineup, without paying anywhere from about $50-$85, including tax, for a feature that you’re never going to use. It makes sense, especially given the (ridiculous) public outrage that came with Sony removing the ‘Other OS’ feature from the PlayStation 3, and refusing to cut the price of the console afterward, resulting in lawsuits aplenty.

If you already own a 3DS and/or a 3DS XL, and are wondering how this whole 2DS thing affects you, well, the short answer is, it doesn’t. It’s not for you. It’s for people who haven’t jumped into the 3DS investment yet, likely because of cost concerns, or not finding 3D a good reason to pay for an entire dedicated handheld, even if it’s jam-packed with loads of great games at this point. All upcoming 3DS games are still planned to have a 3D component, and both the 3DS and 3DS XL will continue to be sold as normal. The 2DS is an addition to Nintendo’s handheld strategy, not a subtraction. It’s never a bad thing to have more options!

Moving beyond Nintendo’s press release, we’d also like to remind gamers that this is not the first time that Nintendo has offered three different versions of the same handheld. Heck, just a short while before the 3DS launched in early 2011, Nintendo was simultaneously selling the DS Lite, the DSi and the DSi XL. Guess what the DS Lite was? A cheaper DSi that was missing a few features (even if it was the only one that played Game Boy Advance cartridges like the launch model DS did), including the entire DSiWare line of games. Yes, the DS Lite came before the others in this case, but the principle is the same.

So, if you’ve already bought a 3DS and/or 3DS XL, then move along, because the 2DS has nothing to do with you. If you’ve been holding out on a 3DS purchase and have been waiting for a cheaper option that you don’t mind sacrificing 3D for however, this may be exactly what you’re looking for, especially if you want to buy an introductory Nintendo handheld for your little son or daughter.

The 2DS will release for $129.99 in red/black and blue/black variations. It will come to retail on October 12th, alongside the 3DS line’s no doubt biggest blockbusters of the year, Pokemon X and Pokemon Y.

Is this announcement enough to persuade you to invest in Nintendo’s current handheld line? Does the 2DS matter to you at all? Do you think that the 2DS will even sell well? As usual, feel free to comment on this bold announcement below…