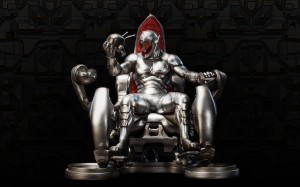 The Avengers: Age of Ultron has just signed its newest cast member, in this case for the titular villain! Ultron will be portrayed by Emmy-winning actor, James Spader, best known for his television work on Boston Legal and The Practice. He’s also had feature film roles in Stargate, Lincoln, Wall Street and Crash, and has actually starred with Iron Man himself, Robert Downey Jr., in 1987 film, Less Than Zero. There’s a reunion that most probably never imagined happening!

In announcing Spader’s casting, Marvel Studios also confirmed today that they have successfully inked deals with Chris Hemsworth and Chris Evans to reprise their roles as Thor and Captain America respectively in The Avengers: Age of Ultron, boosting the total signed cast to four at this point, including Spader and Downey Jr.

It’s also been heavily implied in prior interviews that Mark Ruffalo will be returning to portray Bruce Banner/The Hulk, Samuel L. Jackson will be reprising his role of S.H.I.E.L.D. boss, Nick Fury, and Cobie Smulders will reprise the role of high-profile S.H.I.E.L.D. agent, Maria Hill in the upcoming sequel. Disney and Marvel Studios haven’t yet made the official announcement on any of this casting however, even if it’s pretty well inevitable, given that all three actors are signed for multiple Marvel Studios movies yet!

The Avengers’ writer-director, Joss Whedon is returning to both duties for the sequel. He will also be directing and writing the pilot for Agents of S.H.I.E.L.D., the live-action television series set in the Marvel Cinematic Universe, premiering on ABC on September 24th. Despite this, Whedon has downplayed groundwork being laid for the Avengers sequel in the new television series, even if he hasn’t ruled out a few teases.

Ultron has in many ways become the most recurring and beloved villain in the long and varied history of the Avengers comics. Apparently, Whedon had always planned for Ultron to be the villain in the second movie as well, despite a post-credits scene in the first movie originally suggesting that the superhero ensemble may actually be up against cosmic threat, Thanos. Nonetheless, the decision to make Ultron the villain of the second Avengers movie has been received quite well by Marvel fans.

Despite this however, Whedon has warned that there will be some changes to the character in the movie versus the comics, leading up to the announcement of Spader’s casting in the role. Whedon claims that some of Ultron’s (many) powers in the comics will be stripped out for the movie, to make a more streamlined villain. Ultron’s origin will also be altered so that he is no longer designed by original Ant-Man, Hank Pym, even if the villain is still planned to be an artificial intelligence. This could be because Ant-Man will actually be kicking off a subsequent phase of Marvel Cinematic Universe movies later in 2015.

The Avengers: Age of Ultron will come to theatres on May 1st, 2015, concluding ‘Phase Two’ of Marvel Studios’ movies. It will be preceded by Thor: The Dark World, which arrives in 3D, 2D and IMAX 3D theatres on November 8th of this year, as well as Captain America: The Winter Soldier on April 4th, 2014, and Guardians of the Galaxy on August 1st, 2014. The only Phase Two movie that’s arrived so far is Iron Man 3, which comes to DVD and Blu-Ray on September 24th, and will see an early home digital release on September 3rd.

Are you satisfied with Spader’s casting as the live-action incarnation of one of The Avengers’ most frequent and popular villains? Leave your comments below.

Eggplante will also continue to deliver you any and all news related to The Avengers: Age of Ultron, and the Marvel Cinematic Universe as a whole, as it’s projected to us.