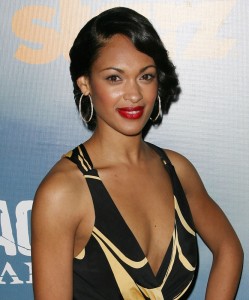 Shortly before the tease that DC Universe government bruiser, Amanda “The Wall” Waller would be making her debut in the second season of Arrow, it appears that Warner Bros. and The CW have indeed cast the part. Cynthia Addai-Robinson of Spartacus fame will play the role of the beloved DC villain, who is said to be making her debut on the sixth episode of Arrow’s upcoming second season.

Addai-Robinson’s casting may initially shock some longtime DC fans, given her smaller size and youth. One of Waller’s identifiers in the bulk of the classic comics is that she’s an older woman that also happens to be built like a linebacker! Despite this however, the comics’ total New 52 reboot has re-imagined Waller as a younger, thinner woman, though no less ruthless. It’s probable that Addai-Robinson was cast to keep with Waller’s current incarnation in the rebooted New 52 comics.

Like the printed panels, Waller will apparently be an agent of A.R.G.U.S. when she comes to Arrow’s Starling City. She will also replicate one of her most iconic moments in DC continuity in the beloved CW television series, the formation of government-sanctioned super-villain task force, The Suicide Squad. The role is said to be recurring, and it seems that Waller will be a key antagonist throughout the bulk of Arrow’s second season, and perhaps even beyond!

Waller is also said to be the catalyst for the return of recurring DC assassin, Deadshot, played by recurring guest star, Michael Rowe in his Arrow incarnation, as well as being associated with another DC villain debuting on Arrow for the second season, Bronze Tiger, who will be portrayed by Michael Jai White.

Amanda Waller joins an ever-expanding lineup of DC characters that will be making their debut during Arrow’s second season. Caity Lotz will be portraying DC superheroine, Black Canary, despite series regular, Katie Cassidy’s Laurel Lance eventually taking up the moniker in the comics. Numerous villains that have appeared in DC comics will also be introduced throughout the season, including Sebastian Blood, played by Kevin Alejandro, Sin, played by Bex Taylor-Klaus, and Isabel Rochev, played by Summer Glau.

The second season of Arrow is also set to introduce speed-enhanced superhero, The Flash, who will spin off into his own television series, Flash, sometime in the future. The role has yet to be cast, though the character incarnation is confirmed to be Barry Allen, who will be a forensic scientist when making his debut in Starling City.

Amanda Waller’s appearance on Arrow is the largest hint yet that the show is being groomed to be part of a larger live-action DC Universe on television, and possibly in film. Rumours continue to circulate that Arrow will be rolled into the same continuity established in this Summer’s successful Superman-starring blockbuster, Man of Steel, which will introduce Batman to its universe in its upcoming 2015 sequel.

Given that, despite having no superpowers, Waller has posed enough of a threat to be a menace to the entire Justice League at various points, it’s certainly possible that Warner Bros. may be setting up their DC Cinematic Universe in pieces across film and television, just as rival comic company, Marvel has done with their own movies leading up to and beyond 2012’s landmark crossover movie, The Avengers.

What do you think of Amanda Waller joining the cast of Arrow? Would you like to see Arrow and Flash exist in the same continuity as Man of Steel and its currently-untitled upcoming sequel? As usual, your comments are welcome below!

Eggplante will continue to bring you your news on Arrow and the ever-expanding DC Cinematic Universe, as it shoots to us!