Charlie Murder is a game that largely survives on its quirky sense of punk rock-inspired character.

The second Xbox Live Arcade game headlined in Microsoft’s Summer of Arcade 2013 lineup, and the only one of the four that will solely be available on Xbox 360, Charlie Murder is yet another side-scrolling, arcade-style beat ’em up with RPG elements.

There’s no shortage of Xbox Live Arcade games in this subgenre, between Castle Crashers, Scott Pilgrim vs. The World: The Game, Sacred Citadel, Dungeons & Dragons: Chronicles of Mystara, and more. Castle Crashers and Scott Pilgrim vs. The World: The Game in particular have their own heaps of kooky, satirical character to further set them apart from the pack. Chances are, if you’ve spent any decent amount of time with the Xbox Live Arcade selection, you’ve played this kind of game more than once already.

It’s a good thing then that Charlie Murder comes to us from Ska Studios, best known to Xbox gamers for The Dishwasher: Dead Samurai and its sequel. Originally planned to have a quiet release on the Indie Games channel, Charlie Murder must have really turned heads at Microsoft, because it not only got the upgrade to an Xbox Live Arcade release, but a Summer of Arcade release on top of that! Talk about humble beginnings. 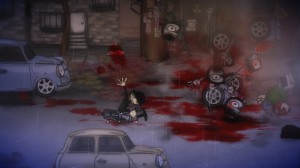 Really though, even if its gameplay has been done on Microsoft’s digital channel several times already, it’s not difficult to see how Charlie Murder can grab your attention. The entire game plays out as a punk rock fantasy on some sort of specially-cooked LSD, supplied by Tim Burton. So, in other words, a Ska Studios game.

After titular protagonist, Charlie kicks his bandmate, Paul out of his band, Charlie Murder, Paul makes a deal with evil forces to become the all-powerful villain, Lord Mortimer, head of his own rival punk band, Gore Quaffer. Enlisting the aid of demonic bandmates, Gore Quaffer unleashes a zombie apocalypse and beats all five of Charlie Murder’s members to an unpleasant death, which they’re narrowly saved from by paramedics, who rudely interrupt them smacking around some lesser demons in Hell.

Already, Charlie Murder boasts a style all its own, but it only gets zanier as you play on. You’ll move between dank settings like sewers and graveyards at one moment, graduating to shopping malls, nightclubs and even underwater ruins as you continue your pursuit of Gore Quaffer.

As you can imagine, each location is populated by legions of enemies and several crazy bosses as well, and you can move between them via a World Map. You’ll face hulking Jason Voorhees-style maniacs, flying witches that fire handguns, SWAT officers, spooky apparitions, ninjas, and of course, lots and lots of zombies. Yeah, it gets more than a little ridiculous.

As with most of its rival offerings, Charlie Murder gives you the option of playing solo, though it’s at its best when you can bring along a full team of four players, which can be supported both locally and on Xbox Live. Each of the five playable characters has their own distinct specialty, not unlike the protagonists of Sacred Citadel in particular. Charlie himself is a ‘Berzerker’ with an average set of capabilities for example, while Rex is a ‘Heavy’ that is all about strong physical attacks, and Kelly is a ‘Mezmer’ that emphasizes magic-themed attacks.

Even with the liberal RPG elements, which see damage numbers pop up with every hit, and allow your characters to level up and get stronger as they defeat enemies, Charlie Murder roots everything in a clever, real-world context. You wear t-shirts, hats and other such accessories to bolster your defensive stats and elemental resistances for example. You activate magic spells for your characters (activated by holding Right Trigger and pressing the appropriate face button) by getting tattoos. You also restore your health by storing and eating both food and beverages in your inventory. Drinking beer will even temporarily slow down your movement, emulating drunkenness! It all helps to further give the game its own unique sense of character, compared to the many other Xbox Live Arcade games that play almost exactly like it.

With the exception of the pause menu, just about everything is managed by looking at your cellphone as well. Your ‘EXP’ is dictated by the amount of ‘Followers’ you have on Squid.dus (essentially this crazy world’s version of Twitter), any stats and new abilities you activate are done by sending text messages to a strangely affectionate handler, and you can even use the cellphone’s camera to take pictures of QR codes lying around the various environments for items and money. All of this is easily done with the D-Pad, even if the punitive cellphone menus and inventory windows do take a bit of getting used to, especially since fumbling with either leaves you vulnerable during co-op play. 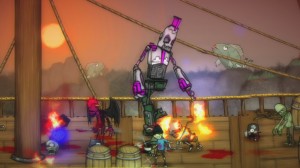 Of course, when you’re playing solo especially, there’s not a whole lot of incentive to customize your character. Sure, there’s obviously subtle differences between which band personality you choose to control, depending on whether you want to prioritize strength or speed or whatever else, but no serious demand to alter your play style between characters.

In general, unless you’re playing with a full team of players, which gives you the option of team-up attacks and whatnot, you can get through most of the game just by mashing the X button continually, occasionally pressing Right Bumper to consume food and recover health. Occasionally, you’ll press Y to throw in a heavier attack, or press A to jump away from harm, but that’s about it. Despite the impressive enemy and boss variety in Charlie Murder, the enemies themselves are quite dumb and predictable, even for beat ’em up standards!

The game trips up all the more when it tries to force in minigames as well. Certain sections will have you shooting on a witch’s broom in a rail-shooter style, while others will have you matching button prompts to ride a skateboard, and yet more will have you performing Guitar Hero-style button tapping to match notes for a song during certain cutscenes. Sure, these little minigames prevent Charlie Murder from becoming a completely monotonous button-masher, but they’re especially annoying when you’re playing solo. They feel tossed in and unrewarding, and you’ll just want them to be over with whenever they intrude on your skull-cracking.

Even if the gameplay is a lot of just mashing the X button, we can’t deny that Charlie Murder is at its best when it just embraces its own sense of chaos however. Yes, you can accidentally injure your allies if they’re caught in the midst of your attacks during co-op in this case, and yes, it is occasionally annoying if your buddies aren’t playing carefully. This is mostly excusable in the end though, given the game’s clear love of nihilistic craziness. 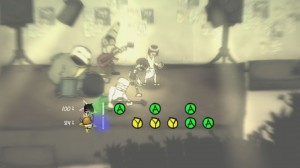 Even with its frequent sense of punk humour, Charlie Murder gets pretty violent and gory too! You can immolate, melt, behead, shatter, fry and hack apart your enemies to gloriously bloody effect, between your tattoo-fueled attacks, and your ability to pick up an array of weapons from machetes to maces to shotguns to uzis.

Defeated enemies will often explode and collapses in bursts of blood, and bosses especially will often leave gruesome remains when you finally bring them down. It’s delightfully nasty stuff! If you have a weak stomach, you can change the blood from red to green in the options menu, but it won’t de-activate the various hilariously horrific ways that your foes can meet quite a grisly end!

Of course, despite all of the window dressing, Charlie Murder still fundamentally feels like it’s liberally taking notes from Castle Crashers and Scott Pilgrim vs. The World: The Game throughout its duration. This means that you have to be actively attracted to its ludicrously violent punk fantasy setting to seek it out above the superior competition. Yes, the game is quite functional, and it can indeed be fun if you can assemble a full team of four players, but much of the appeal is lost when you play by yourself, since Charlie Murder plays more brainlessly and repetitively than some of its like-minded competition.

Playing by yourself can also cause added frustration, since you lose the ability to revive your buddies like you can in co-op. This is done by approaching a fallen ally and pressing B, triggering a cute minigame that has you twitching the thumbsticks like defibrillator paddles and then clicking them in to shock your bandmate back to life. It’s pretty clever.

Again though, when playing solo, nobody is looking out for you. As you can imagine, the game throws lots of enemies at you as well, especially during boss encounters! If you get lazy with fighting and gaining levels especially, enemies hit very hard, and may kill you in a single misplaced barrage of attacks, booting you all the way back to the start of whichever stage you’re in. While Charlie Murder has many moments of fun, it does come with a few frustrating moments like this as well, especially if you’re going it alone.

Of course, if you and your Xbox gaming buddies have already enjoyed its inspirations at length, and are actively seeking another arcade-style beat ’em up with RPG sprinkles on top, then Charlie Murder presents a reasonably lengthy and memorable adventure for its modest $9.99 asking price. It doesn’t present any actual new gameplay ideas for frequent samplers of Xbox Live Arcade’s finest beat ’em up selections, but the heart and charm of Charlie Murder lie in its presentation and its bizarrely enjoyable sense of gory, chaotic fun.

So, if picking up two machetes and hacking the limbs off of cartoon witches, or crushing a platoon of ninjas with an arcade machine, or wailing poisonous, head-exploding vocals at killer construction workers is your idea of a good time, then Charlie Murder presents another fine excuse to bust some heads with your friends on Xbox Live.

Just be ready to wear out your thumbs!