Some games age like fine wine, and only seem to get better with time. Super Mario World. The Legend of Zelda: Ocarina of Time. Sonic the Hedgehog 2. Chrono Trigger. Super Metroid. Like any other entertainment medium, video games will always hold their undisputed classics. After all, some nostalgic things consistently remain as good as you remember them.

With that said however, some supposed video game “classics” have aged about as well as chocolate milk left on the sidewalk for twenty years. Sure, games like Goldeneye 007, Dragon Warrior and Mortal Kombat II made immense, groundbreaking strides in their respective genres back during their heyday, and gamers can still love them for it… But if you try and play them now, without those rose-tinted nostalgia goggles on, you’ll be wrestling with clunky controls, nose-turning (or just plain hilarious) graphics, and all sorts of unintuitive, sometimes downright hostile game design. There is after all a fine line between being “nostalgic” and just being plain “dated.”

Unfortunately, Flashback: The Quest for Identity falls into the “dated” category. A multi-platform 16-bit title with a considerable cult following, the game was among the first to try and push for a more persistent and cinematic presentation in a video game narrative. It’s highly beloved as one of the most underrated 16-bit classics amongst its fans because of this.

With that said, if you try and play Flashback: The Quest for Identity now, taking it on its own merits, the game is nearly unplayable by modern standards. It’s horrendously ugly, its rotoscope-style controls are fussy to the point of being nearly broken, and its trial-and-error gameplay demands an almost god-like amount of patience! That’s before you consider the slow-as-molasses pacing that even the fans admit is an acquired taste too.

Games like this are the classics that would benefit most from a fresh coat of paint, since it’s obvious that Flashback: The Quest for Identity was constrained by the more primitive gaming technology of the early 90’s. Thus, Microsoft’s Summer of Arcade 2013 promotion on the Xbox 360’s digital game channel has included a high-definition, Unreal Engine-powered remake, simply titled, Flashback. Substituting the rotoscoped animation for more traditional and modern 2.5D design, and expanding several elements of the plot and character backstories, Flashback aims to update this blend of sci-fi conspiracy and amnesiac thriller for the modern age…

… Except it almost entirely fails to do so, because both as a remake and as a game on its own merits, Flashback just isn’t very good.

The first problem is that development duties for the remake unfortunately fell to VectorCell, who have only one project to their name so far, that being infamously shoddy and broken horror game, Amy, released on Xbox Live Arcade and the PS3’s PlayStation Store last year. Fortunately, Flashback isn’t as ugly nor glitchy as Amy was, faint praise that this may be. Flashback is still riddled with technical issues and poor game design however, and the fact that it has less glitches than Amy doesn’t mean much in the end, because it’s still riddled with glitches in contrast to most other games.

Anyway, for those unfamiliar with the original 1992 game, Flashback places you in control of Conrad B. Hart, a government agent working for the Galactic Bureau of Investigation, or GBI. In the original game, this would have been a spoiler, but the 2013 remake just spills the beans on this right away. Conrad has lost his memory, waking up on Saturn’s now-terraformed moon, Titan with no idea how he got there or what he was doing. He’ll need to piece his lost self back together so that he can recall the means to stop an alien invasion, which has already begun its assimilation of Earth, having aliens called ‘Morphs’ masquerading as its citizens.

Given that Flashback is a remake of one of the first serious cinematic presentation efforts in gaming, it’s unsurprising that the story and events of the game take inspiration from several well-known and beloved sci-fi movies, most notably Blade Runner, They Live and The Running Man, among others. The remake is presented with a chance to take this patchwork of inspiration and turn it into an even better story, but it almost immediately fumbles the ball by making its plot incredibly disjointed and clumsy. The jumbled, sketch-style cutscenes that play out whenever Conrad reclaims a part of his memory don’t help matters, and only serve to make things more confusing when they should be answering the player’s questions. This would have made reclaiming Conrad’s memory genuinely rewarding, and not tedious like it unfortunately seems to be here.

Also not helping matters is the fact that Conrad is no longer a silent protagonist. He was better off muzzled, because now that he’s given free reign to crack wise and be a smart-ass like some wannabe action hero, he just comes off as sounding like a complete tool for the entire game. He’s in no way a likeable or relatable hero that the player will want to root for, and most will probably just see him as an irritating douche bag. The poor writing and hilariously awful voice acting plaguing every character’s lines only exacerbate that issue as well, particularly given that Conrad sounds like a dopey teenager desperately trying to be cool, rather than the confused, yet determined accidental hero that he was obviously envisioned to be when the 1992 game was made.

At the very least, some of the visual touch-ups aren’t too bad. The environment design is actually solid, only let down by feeling convoluted and poorly-defined in terms of the actual landscape, and if nothing else, the Unreal Engine was used to bring the world of the 1992 game to life in a way that’s obviously leagues better than the now-hideous visuals of the original product. Some of the music is pretty decent as well, even if it doesn’t kick up often.

Unfortunately though, we haven’t even begun to discuss the gameplay yet, which is one thing that really ruins Flashback as a remake especially. The original 1992 game played out like a Prince of Persia-style action/puzzle game, and that was fair enough for the time. The 2013 remake however tries to take obvious inspiration from Xbox Live Arcade darling, Shadow Complex in particular, trying to re-envision the experience as a Metroid-esque action-adventure game with Contra-style run-and-gunning. It also drops the Metroid ball by making Conrad’s quest almost entirely linear, defeating the purpose of that gameplay style.

For some inexplicable reason, Flashback only halfway abandons the rotoscope-style controls of the original as well, resulting in a messy hybrid control method that makes gunplay and movement feel far too rigid, yet places you against enemies that are hugely superior to Conrad in terms of mobility, as if they belong in a run-and-gun shooter like Contra. In the original, the smarter enemy placement required you to strategically position yourself to take on enemies, exploiting the player’s vulnerability to make you think and play smartly in an effective way. Even with the heavily dated design, that element of the 1992 game still theoretically works.

In the disappointingly dumbed-down remake however, you just have to madly shoot around with the 180 degrees available to you and hope you hit something. Flashback attempts to expand the mechanics of the original with stealth kills and the ability to shoot while hanging, but there’s never any reason to do either of these things. There’s no thought or strategy involved in the combat at all. None. Making Conrad still move, climb and jump so rigidly, like he did in the 1992 game, only makes fighting enemies all the more infuriating in the 2013 remake at the best of times. Needless to say, the combat in Flashback is far from satisfying, and doesn’t even come close to how exhilarating it felt in Shadow Complex!

You can at least power up Conrad by earning EXP and leveling up upon defeating enough foes, allowing you to allocate Skill Points into one of three categories, increasing your health, your shooting power or your charge speed. Given how brainless and annoying combat consistently is however, this scrap of RPG elements feels completely redundant, adding nothing to gameplay, given that how you choose to boost Conrad’s stats barely matters. This also defeats the purpose of the new EXP-awarding VR challenges that VectorCell obviously wants players to attempt as well. Combat still isn’t fun when you’ve maxed out Conrad’s stats, and you’re still always going to be fighting with the fussy controls and rigid gunplay no matter how strong Conrad gets!

If anything is going to frustrate you though, it’s going to be the heap of glitches that constantly rear their ugly heads in Flashback! The astonishing amount of times that we had to reload checkpoints because Conrad suddenly got stuck to the floor and wouldn’t move is completely unacceptable!

Likewise, scenes and textures won’t load properly, audio will randomly cut out, Conrad will sometimes drop dead at seemingly random, the melee combat is completely broken and has no semblance of viable collision detection, and there were one or two instances where the game just entirely froze, forcing a reboot of the entire Xbox 360. Doesn’t VectorCell have a QA department? Who looked at this and Amy and thought that either of them were ok for public release with this many experience-ruining bugs in them?!

There may be time to fix some of these issues for the subsequent releases, since, at the time of this writing, Flashback is a timed exclusive on Xbox Live Arcade while being spotlighted for Summer of Arcade 2013, just like Brothers: A Tale of Two Sons and Teenage Mutant Ninja Turtles: Out of the Shadows. Somehow however, we doubt that VectorCell is going to bother, probably just releasing Flashback for its imminent debut on Steam and the PS3’s PlayStation Store with the same batch of bugs and technical issues constantly yanking players out of the experience. 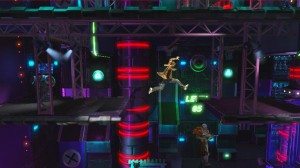 Mercifully, Flashback is at least a short game, lasting about three to five hours before the end credits, and containing just a small batch of achievements that are far too brainless and irritating to be worth earning. As it stands, even hardcore fans of the original 1992 game will probably be disappointed and perhaps even downright outraged at the shallow and buggy 2013 remake. You do at least get a working port of the 1992 game accessible within the remake’s title screen right away, if you’re the retro gaming type, which is only missing the music (presumably because VectorCell couldn’t get the rights to it), but trying to play the 1992 game with an Xbox 360 controller definitely doesn’t do the experience any favours.

Whether you’ve played and enjoyed the original 1992 game or not, we just can’t recommend Flashback, even as a part of Summer of Arcade 2013. It’s not fun at all, it ruins its decent visual update of the original game with terrible voice acting, frustrating storytelling and shallow gameplay, and the inexcusable amount of glitches only serve to make a disappointing experience downright bad. Flashback is worse than a missed opportunity to properly remake a creaky 16-bit classic. It’s an insult to said classic.

It just goes to show you that some experiences are better off left in the past.