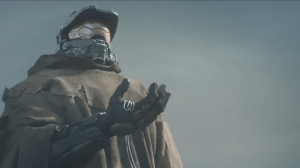 Bungie and Activision have taken to the inter webs to unveil the box art for their upcoming behemoth Destiny. The cover art, which was shown off in a PlayStation 4 box, though we assume will be the same for all versions of the game, depicts – surprise! – characters with guns.

What is a bit odd is that we’d have thought Bungie would distance itself ever so slightly from its previous God-like hero, Master Chief. Yet, the main character on the box art appears very similar to the cloaked Chief that Microsoft showed off at E3 2013 this year. Take a look at the shot Microsoft showed off at left, compare it to the box art and let us know what you think.

Destiny is due out for virtually every console in 2014, including current and next-generation offerings.