Except it seems that developer, Red Fly Studio’s original vision was ultimately compromised. The combined likes of Microsoft and Activision appear to have led to a premature release before the game was properly finished, and Nickelodeon’s intervention seemingly saw most of the more mature elements stripped out, despite the game still packing a (pointless) T-rating.

The result is a functional, but unpolished and clunky mess of ideas that just never come together. Out of the Shadows is at least a noticeable improvement over the horrendously buggy and shallow Flashback, but it’s still a frustrating waste of potential that was clearly ruined by the franchise’s various handlers fighting over it and/or rushing it.

Be that as it may, Out of the Shadows picks up with a redundant frame narration showcasing April O’Neil’s latest abduction, set within one of the clumsiest movement tutorials we’ve ever seen. While the first impression is not ideal, the game does at least right itself a bit more when you actually get to control the Turtles. When playing solo, you can use the D-Pad/Directional Buttons to switch between Turtles at your leisure. If you’d rather, you can also play with one other person locally, or up to three other people online.

From there, the game unfolds like a three-dimensional beat ’em up. You move between linear set pieces, giving the illusion of an open world that isn’t really there, and just pummel whichever goons get in your way. You’ll face some familiar foes from throughout the franchise, including the Purple Dragon Gang, Foot Clan, Kraang Robots, and Mousers, and at the end of each of the game’s four chapters, you’ll encounter a boss battle against villains such as Karai, Baxter Stockman, and of course, the Turtles’ arch-nemesis, The Shredder.

One thing that players will immediately notice when they start fighting is that the combat system is deceptively complex. At first, it just seems like a lacklustre knock-off of the Freeflow Combat system from the Batman: Arkham games, but there’s more to it than that. Building up combo multipliers allows you to use unique finishing moves, counter multiple enemies at once, taunt foes for stat bonuses, and even perform team-up attacks with the other Turtles, whether or not you’re playing solo. You can really tell that Red Fly wanted to develop a very impressive combat system here, and that seems to be where most of the development attention was focused.

When you get into a nice combat rhythm like this, Out of the Shadows truly does present some of the most enjoyable and authentic Teenage Mutant Ninja Turtles combat in any video game to date! Playing with friends is even better, since you can co-ordinate and chain together your combos, listening to the Turtles’ banter all the while. The way that the Turtles can so effectively operate as a unit is truly one of the best parts of fighting what otherwise amount to the same droves of enemies throughout the game.

Unfortunately, the unpolished elements sometimes drag down the combat, particularly regarding the controls. The controls are a bit delayed, occasionally having your Turtle kick and leap around seconds after you issued the button commands to them, and whether or not the counter button works properly sometimes feels downright random. The Turtles also can’t dodge on a dime either, leading to scenarios where it’s almost impossible to avoid getting hit, since all of the enemies have a speed advantage over you. Given how speedy enemies are, and how quickly they surround you, it can be an incredible nuisance to see that the Turtles are surprisingly hefty and sluggish in battle, lacking the lithe and agile responsiveness that Batman pulled off so well in his recent Arkham offerings.

Another problem with the combat is the camera, which is awful. The camera zooms in on textures and onto the floor fairly regularly, and the lack of an overhead view gives you a consistently poor awareness of your surroundings. This will often lead to you constantly having to flick the camera stick while taking hits from enemies you can’t see, desperately trying to get your bearings as you’re surrounded by legions of foes. It’s quite a hassle, and it’s one of the most frequent ways you’ll notice the lack of polish often bogging down Out of the Shadows. 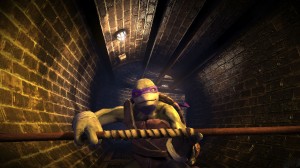 Fortunately, you are at least given plenty of means to customize all four Turtles, and the amount of detail put into giving them all distinct fighting styles is very impressive! The Turtles’ weapons and personalities are all accounted for with their unique attack methods, and any player will no doubt quickly find their favourite as they gain EXP and level up. It’s too difficult to spread your attention between multiple Turtles when developing their skills unfortunately, but just sticking with one Turtle should be fine to see you through the game, only switching when said Turtle needs to be revived with some pizza during solo play.

While Story Mode is far too quickly exhausted at a mere four or five hours, you are at least given several alternate play modes to keep extending the fun as well. You can take on waves of enemies with just one of the Turtles in Challenge Mode, or see how long a full team of four can last in the unlockable Survival Mode, train with your abilities in the Dojo, and even play Arcade Mode, which brings back the scrolling style of the retro Teenage Mutant Ninja Turtles arcade games. Arcade Mode is particularly enjoyable with a full group of four players, and it’s almost worth downloading the game for by itself if you’re a big longtime fan of Teenage Mutant Ninja Turtles!

At the considerable price of $14.99 however, you really have to ask yourself how much you love Teenage Mutant Ninja Turtles before dropping the money on this. You can see all throughout the game what kind of amazing offering it could have been, had it been allowed to proceed on a proper development schedule. Unfortunately, as surprisingly deep as the combat is, and as surprisingly solid as the game’s environments and character models look, you’ll constantly be frustrated with the sluggish controls, unrefined level and enemy design, and a completely trite, forgettable storyline that could have otherwise helped hardcore fans slog through the weaker gameplay elements, had the plot at least been in any noteworthy. No such luck, unfortunately.

At the very least, Out of the Shadows isn’t filled with game-breaking bugs like Flashback is, but it’s very evidently a rushed and messy product that will likely only appeal to die-hard fans of Teenage Mutant Ninja Turtles, and mostly those who have friends to play online with at that. It’s not the worst game that the franchise has delivered by any stretch, but it is a very disappointing one, and it deserved to be so much better.

As far as platform differences go, there aren’t really any to speak of. Obviously, the game is chiefly designed for consoles, so PC players had best bring a gamepad so they’re not wrestling with their keyboard. There isn’t really any conceivable difference between the Xbox Live Arcade and PlayStation Store builds however, beyond the controller you use, and whether you’re earning achievements or trophies. The game packs in quite a bit of these, and they’ll take you a while to earn, but given that they have to work with such a compromised game, they don’t feel in any way clever or rewarding to try and claim for the most part.

Out of the Shadows is ultimately an unmemorable, uneven and generally uninteresting experience. It gets the Teenage Mutant Ninja Turtles flavouring right, and even has plenty of good ideas between the combat and play modes, but as an action game, it’s rough and ultimately unremarkable. You might get some enjoyment out of this if you’re really craving a new Teenage Mutant Ninja Turtles beat ’em up to play, but you’d probably find significantly more entertainment in replaying the franchise’s old NES and Super NES offerings.

Looks like it’s back into the shadows, Turtles. Your true second coming in the world of gaming still seems to be ahead of you.