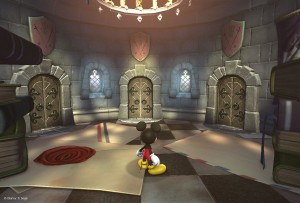 Contrary to popular belief, the Sega Genesis managed to have hits before 1991’s release of the original Sonic the Hedgehog. Among these were Golden Axe, Altered Beast and a beloved little Disney game called Castle of Illusion Starring Mickey Mouse.

Castle of Illusion’s fan following has persisted to this day, not only leading to sequels on the Genesis, Sega Master System and Sega GameGear, but also a recent spiritual follow-up, Epic Mickey: Power of Illusion on 3DS. The game was a frequent request for Nintendo’s Virtual Console catalogue amongst enduring Sega loyalists, though it seems that Disney has done this demand one better, commissioning an entire remake of the same name for current digital console game channels.

What a remake it is too! Rather than just taking the exact design of the original Genesis game, touching up the graphics and music, adding achievements/trophies, and calling it a day, Sega Studios Australia, responsible for developing the game, have redesigned the entire affair from the ground up! The level backdrops and boss identities are familiar, but everything has been re-tooled, expanded and polished with current console technology, to the point where the adventure will feel entirely new, even for die-hard fans of the original Genesis game! It looks mighty gorgeous too, being one of the most visually striking Disney games to date on any platform! 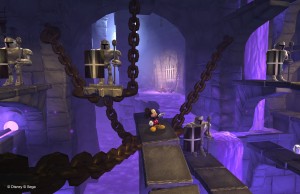 The gameplay result however is a joyful and charming 2D/3D hybrid platformer that is full to burst with enchanting Disney magic, regardless of whether you’ve played the Genesis game or not. The game is quite forgiving in keeping young kids and inexperienced players in mind, so retro gamers looking for a challenge might be disappointed that Castle of Illusion’s remake is rather on the easy side, and doesn’t have adjustable difficulty settings to boot. Even if you’ll breeze through it in just a couple of hours though, the game is difficult not to love, simply due to how polished and adorable it all is!

The remake adds in a narrator and several cutscenes to tell the story, but despite the narrator’s infectious energy and the striking still art of the cutscenes, the premise is still ultimately tissue-thin. Mickey and Minnie Mouse are strolling through the forest one day, when suddenly, the witch, Mizrabel, jealous of Minnie’s beauty, snatches her from Mickey. Mickey gives chase all the way to Mizrabel’s lair, the titular Castle of Illusion. In order to reach the castle tower where Mizrabel holds Minnie captive, Mickey will need to locate seven Gems of Illusion held by Mizrabel’s most trusted underlings, the Masters of Illusion.

It’s simple stuff, still firmly rooted in the damsel-in-distress gaming traditions of the 80’s and 90’s. 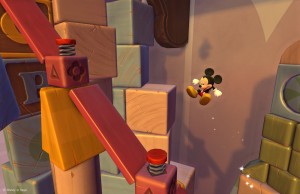 Upon properly starting the game, you’ll get a chance to get used to the (simple) controls before you’re placed into the castle’s hub area, a new addition to the remake. From here, you can wander into certain rooms representing the two “Acts” and boss fight in each world, Super Mario 64-style. You can also interact with certain objects to read up on bosses, check out concept art, and even change Mickey’s costume. Of course, all of this has to be unlocked however.

Once you’re properly dropped into a stage, you’ll be consistently impressed with how much painstaking detail has gone into completely redesigning the Genesis game’s more straightforward level environments. The Enchanted Forest now features mischievous signpost puzzles and platforming challenges on fluttering leaves. Toyland now has you clearing a path through piles of presents and navigating paths according to their reflection in a mirror. The Storm’s ruins now incorporate additional swimming and puzzle challenges as you navigate platforms that crumble out from under Mickey, between hazardous waterfalls no less!

The levels still aren’t difficult to navigate if you have any degree of platforming skill though, particularly since you can still defeat pretty much every enemy by just bouncing on their heads (and you no longer need to hold Down to defeat enemies like you did in the Genesis game), and follow a straight path to the level exit. 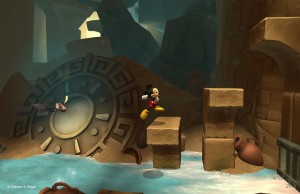 Still, given that a pseudo-3D view makes the levels seem all the more expansive and detailed in the more frequent 2.5D sections, and some fully three-dimensional sections exist where you should probably switch from your D-Pad/Directional Buttons to your thumbsticks/analog sticks, both of which are valid movement options throughout the game, you’ll definitely feel like you’re in much larger and more captivating worlds than the Genesis game could ever pull off!

The boss battles will impress you even more too! While you’re against the same bosses from the Genesis game, with no new additions, the bosses have had all of their old 16-bit pattern-based simplicity thrown out in the remake. Now, they’re more engaging, stylish and complex foes that do a much better job of varying their attacks, even if there’s still mainly just one strategy involved in defeating them. The boss encounters are likely the most challenging and intense that this remake gets, particularly the final confrontation against Mizrabel, so they’re likely what more hardcore gamers will enjoy the most.

There’s no end of things to smile at and enjoy as you play through the game, particularly if you’re an avid Disney fan, which is why it’s such a shame that it ends so quickly. You can polish off the entire adventure in just a couple of hours if you know your way around a platformer, and for the $14.99 asking price, that feels rather short. That’s still longer than the Genesis game would take to beat once you get skilled at it, but not by much. 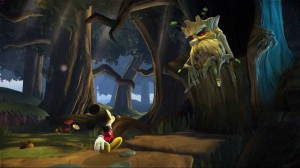 Fortunately, there are lots of collectibles to try and get your hands on throughout the levels, between Magic Diamonds, Chili Peppers, Magic Playing Cards and Statue Pieces, all of which unlock a different bonus you can access from the castle hub area. The Magic Diamonds will particularly keep you busy, as there’s a whopping 800 of them! Tracking down the collectibles is also good for earning achievements/trophies, and you’ll likely want to seek them all out just so you can see every element of the enchanting level design and charming narration put into this remake. Unfortunately, even with all of these collectibles, they only extend the play time to another couple of hours, still leaving the game feeling a bit too short for what it costs.

The Castle of Illusion remake is available on the usual digital channel suspects, those being Steam, Xbox Live Arcade and the PS3’s PlayStation Store. There’s little discernable difference between the three versions, but our personal recommendation is the PS3 version if you have access to all three platforms. The PS3 controller is best suited to this kind of game as it stands, plus, if you pre-ordered this remake, PS3 gamers could exclusively get an emulated download of the original Genesis game for free. That’s certainly not a bad bonus, especially if you’ve never played the original, and want to compare and contrast when experiencing the remake. 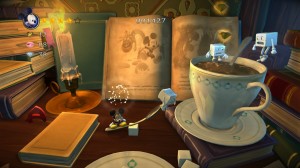 If you don’t have a PS3, the Xbox Live Arcade edition will still suit you just fine, but the floaty controls can be a bit more of a hassle with the less precise D-Pad and thumbstick alignment on the Xbox 360 controller. It’s certainly not game-breaking, but it’s an issue you won’t have to deal with nearly as much on PS3. Likewise, Steam players can still play with a keyboard if that’s their only option, and can enjoy a bit of a touch-up to the already adorable visuals on a high-end computer compared to the console builds. Seeing as Castle of Illusion is blatantly designed for consoles however, PC players had best bring a gamepad.

Regardless, Castle of Illusion’s remake definitely succeeds as an entry point to the platforming genre, a detailed and passionate re-imagining of a Sega classic, and a charming adventure for Disney fans. Retro gamers hoping for something more akin to the Genesis original might be disappointed at the lightweight difficulty however, not to mention the short length, which is still short even after mopping up collectibles and achievements/trophies. This disappointing brevity may tempt some to wait until the game is on sale from its somewhat high $14.99 asking price before dropping the money on it.

If you don’t mind the fact that this is a short, breezy Disney offering however, then the game presents some truly captivating platforming magic while it lasts. It’s a heartfelt and detailed re-imagining that does the legacy of its Genesis original proud! 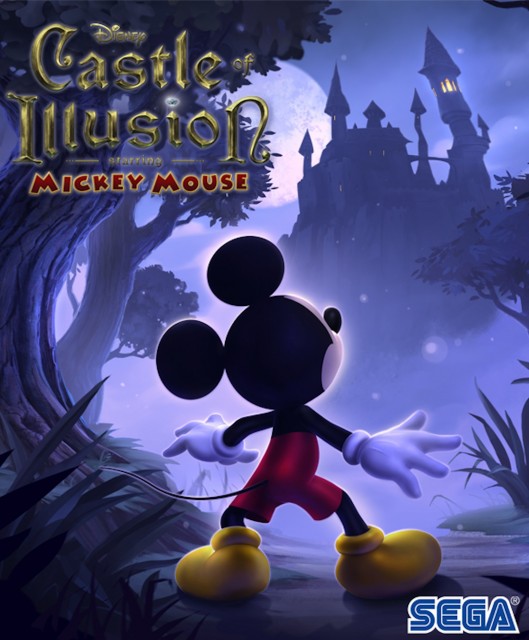