Rain is a PlayStation Store game that Sony has hyped up considerably since its announcement. Seeing the final product in motion, it’s certainly not difficult to see why. Boasting a haunting, melancholic atmosphere and an emotionally poignant narrative about trust in uncertain circumstances, Rain is a narrative experience too compelling and memorable to pass up for enthusiasts of interactive storytelling.

But as a game, it could have done with quite a bit more meat on its bones.

Like Brothers: A Tale of Two Sons, Rain is a beautiful example of a game that successfully presents itself as high interactive art, but that makes its shared brevity all the more unfortunate. It’s a game that’s rather undemanding in terms of its obstacles and puzzles, and it can easily be completed in a single sitting, given that the story only lasts just over three hours or so before the credits roll.

Up until that point however, you’ll be hooked on the incredible sense of atmosphere and emotional urgency, constantly motivating you to play on as you try to unravel the game’s hauntingly beautiful mysteries.

Rain begins with a fever-stricken little boy seeing the shape of a girl, fleeing what looks to be a hulking monster. Not bothering to question whether it’s a hallucination or a trick of his mind, the boy follows the two into a great portal-esque door, winding up in an alternate dimension of darkness that never ceases its rainfall. As if that weren’t enough, the boy’s physical form disappears, replaced with an invisible shell that can only be seen as the rain pours upon what’s left of his being.

This is a key gameplay mechanic, as players routinely encounter beastly foes that they must sneak around, or perhaps lure around, using the visibility of the boy, sometimes in relation to other objects. The un-named boy has zero combat capability as well. The second he’s caught by a monster, he’ll die instantly. Thankfully, pressing any button on your controller will quickly place you back at a generously-implemented checkpoint to try outsmarting that foe again.

Even though the boy can’t fight, he does have the advantage of whatever human intelligence he can muster in his youthful mind, something not awarded to the instinct-driven rain beasts. Thus, Rain is a game about outwitting your enemies, as opposed to fighting them. This essentially makes it a puzzle game first and foremost, though one that combines elements of adventure games and stealth games, with a hint of platforming elements. 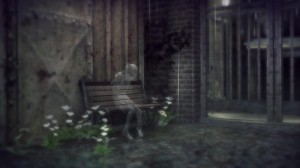 At the start of the game, how players interact with the rain is simple. Monsters can see the boy when they stand in the rain, but the boy will become invisible from view when he stands under many conveniently-placed awnings, verandas and balconies. The initial gameplay portions are just about staying out of the rain to avoid being eliminated by the formless beasts that seem to have the same condition that your protagonist does, only being rendered visible by the raindrops.

Rain attempts to mix this up by throwing in passing mechanics like deep puddles that attract monsters with splashing noises when you step in them, mud puddles that stain the boy and make him permanently visible until he splashes in deep water (handy for the indoor sections when you’re otherwise invisible), and even large, docile creatures that you can hide under to avoid detection. Unfortunately, given the very short length of the experience, these mechanics only show up in passing and are often forgotten later on. It would have been nice if the ambitious scope of Rain could have been able to better make use of these interesting ideas beyond their most simple of applications.

Inevitably, you will also team up with the mysterious formless girl that initially led you to this bizarre dimension of rain. You’ll rely on her to create paths, make paths for her so she can avoid monsters (obviously, if she dies, it’s Game Over for you too), and pay attention to her wordless gestures for hints as to what to do or where to go next. Apparently, in this strange world, you can’t directly communicate with other formless people. Yes, comparisons to artistic PS2 adventure game, ICO are going to be inevitable here.

It’s satisfying to have a partner that is so helpful, but again, the puzzles are so rudimentary that you can’t help but feel like there’s some lost potential in these mechanics. Push a block here, flip a switch there, lure monsters away by holding this object, etc.. Really? This is the best that the game’s three (count ’em) developers could do as far as gameplay obstacles go? Even when two are in-house at Sony? Granted, it’s not that Rain never has clever moments in the puzzles, but none of the solutions feel like they require much thought in the end, especially when the camera consistently points right at where you’re supposed to go.

On the bright side, the fact that the puzzles will almost never tax the brains of reasonably experienced adult PS3 gamers, surely the target audience of such an abstract narrative as this, allows Rain to keep its focus briskly on the supernatural plight of its mysterious lead characters.

You’ll rarely get a sense that you’re in over your head though, even during sequences where you have to evade the incessant pursuit of the game’s main antagonist, a giant baton-holding monster known only as The Unknown. Yes, you’ll feel a sense of urgency, and even a sense of vulnerability given how easy it is to die, but not so much a sense of danger, if that makes sense. That might have been a more realistic proposition had Rain been more challenging, or had gameplay mechanics that strived for the depth of its narrative presentation.

A worthy sacrifice for the sake of telling what is admittedly a pretty striking interactive short story? You decide.

In the later chapters, when the story becomes more surreal and tense, you’ll at least get an exciting climax. The way that the story ends is also incredibly well-done, being quite cathartic and worthwhile. Even if your journey doesn’t last long, you’ll still feel like it was worth undertaking, and that’s a great thing in a game that places so much emphasis on its story and atmosphere.

Again however, one must ask whether this is where they want a game’s priorities to lie, even at the cost of gameplay depth. If you’re just coming for a gameplay experience, Rain will probably leave you wanting. It’s short, it’s easy, and even mopping up every trophy won’t add more than an additional hour or two, only thanks to the introduction of Memories to find on subsequent playthroughs. Memories shed more light on the otherwise vague narrative, but the fact that you need to beat the game at least once to start actually hunting for these collectibles is a bit baffling. Perhaps it’s more evidence that the developers really wanted you to experience their story in its purest form initially, without potentially intrusive gameplay distractions.

What’s most difficult to argue is that Rain is priced at a somewhat high $14.99 though, especially eyebrow-raising given its barely three-hour story length and barely-existent replay value. This will force PS3 gamers to really think about how much they’re willing to pay for what is mostly a narrative-driven experience. If they’re the type to fork over that same price for games like Brothers: A Tale of Two Sons however, then there’s no reason why they wouldn’t be willing to do it again here.

Rain may feel a tad simplistic as a game, but it really is an incredible achievement in interactive storytelling and in-game atmosphere. The simplicity does make it nice and approachable even for more casual players who just enjoy art house media as well. So, in the end, anyone looking for a poignant and engrossing interactive short story should at least find lots to love about that element of Rain’s final product.

Hopefully you’re alright with your investment being exhausted very quickly though.