The Wii U is a great console, but it’s difficult to argue that it’s in desperate need of a killer app. Its slow sales no doubt stem from the fact that the console’s asymmetric gaming technology is rather difficult to sell to the everyday gamer, beyond the die-hard Nintendo faithful. Sure, we have Nintendo-ready franchises ready to buoy the system’s software sales for the remainder of the year, most notably Pikmin 3, The Legend of Zelda: The Wind Waker HD and Super Mario 3D World. As superb as those games no doubt are however, they don’t really have foundations that are effectively tailor-made for the unique technology of the Wii U. 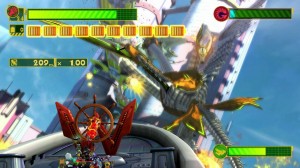 Fortunately, PlatinumGames has instead taken on the task of delivering a high-profile new IP made explicitly and exclusively for Wii U, that being The Wonderful 101! It’s small wonder that Nintendo gave so much promotion to the game, and took on publishing duties themselves, as The Wonderful 101 is so far the most ambitious attempt to make a core gamers’ game specifically made to take advantage of the unique control methods that the Wii U has to offer against competing consoles!

But is The Wonderful 101 as ‘wonderful’ as its title suggests?

That’s a trickier question. On the one hand, the game is a beautiful, polished and action-packed experience that will delight hardcore Wii U gamers with its infectious sense of humour and colourful, outrageous charm. On the other hand however, we’re not kidding when we say that the game is directed at hardcore gamers, despite its seemingly juvenile appearance! The Wonderful 101 is a very challenging endeavour, and the inevitable bugs that come with such ambitious and novel use of Wii U control often make the experience far more frustrating than it should be. 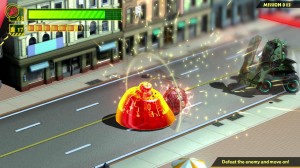 The Wonderful 101 is something of a homage to Japanese live-action shows such as Mighty Morphin’ Power Rangers and Kamen Rider. The titular characters, who are actually called The Wonderful 100 (pronounced The Wonderful One-Double-Oh, for some reason), as the 101st is meant to be you, the player, are a worldwide network of superheroes that use their Unite Morph powers to fuse into large weapons and tools. It’s actually a reasonably sharp premise for an action game!

The world will needs its heroes too, as an alien invasion, masterminded by the extra-terrestrial GEATHJERK forces, has now threatened Earth’s safety! Thus, players must rally together and recruit heroes to join The Wonderful 100, to drive GEATHJERK out of the planet across a variety of combat-heavy missions. 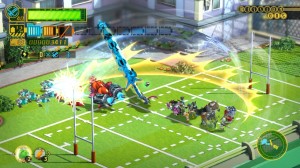 While The Wonderful 101 supports alternate control methods like the Wii U Pro Controller, and even the Wii Classic Controller, most players will probably opt to stick with the Wii U Gamepad. The Wonderful 101 seems specifically designed for the Wii U Gamepad, most notably its ability to draw shapes on the Gamepad Screen to use your Unite Morph abilities. Trying to use the right control stick on any of the other controllers, or even the Gamepad itself, is clunky and often unfeasible with the more complicated shapes. Frankly, the alternate control methods feel quite superfluous when the game is blatantly designed for the Wii U Gamepad controls.

The only reason that alternate control methods exist is no doubt because The Wonderful 101 allows up to five players to play together in the ‘Wonderful Missions’ mode, with one on the Gamepad and four others using Pro Controllers or Classic Controllers. This mode has multiple teams of player-controlled heroes fight against the GEATHJERK. Playing with multiple players, even with colour-coding, quickly becomes far too chaotic however, and the co-op multiplayer loses its appeal very fast. Like the Classic Controller and Pro Controller support that it inspired, the co-op functionality feels tacked-on, and ultimately like little more than an afterthought.

Fortunately, if you play The Wonderful 101 the way it was meant to be played, by yourself, with the Wii U Gamepad, then you’ll find a much more enjoyable and memorable action game to enjoy! As you proceed through missions, recruiting more temporary citizen heroes and Wonderful 100 heroes to boost your forces, you’ll have more characters to make larger and more powerful Unite Morph shapes, gradually unlocked by either finding colour-themed Wonderful 100 characters at set points in the story, or by spending O-Parts, the game’s currency, to purchase these skills at Wonderful Mart.

Larger hero armies are more difficult to control as a trade-off, but they will allow you to hit enemies harder as well. This core risk/reward element of the game’s combat is very inspired, as it prevents battles from becoming repetitive by just letting players power through every skirmish by sheer numbers, especially when you have so many flexible ways to engage in combat!

In fact, if you’ve played any of PlatinumGames’ marquee action games, such as Bayonetta or Vanquish, you’ll already know that their design philosophy emphasizes having a good defense moreso than a good offense! It’s imperative that you purchase skills like Unite Guts and Unite Spring, allowing you to block and dodge enemy attacks with the ZL and ZR buttons respectively, since the GEATHJERK forces hit very hard! On the Normal difficulty setting especially (higher difficulties must be unlocked by beating the game on at least Normal), careless attack strategies will leave your heroes’ pooled Vitality Meter shredded through in no time, especially later in the game where you must take more care in managing your pool of heroes against especially deadly and speedy foes!

Fortunately however, the enemy design is ultimately fair in all of its brutal strength, able to be anticipated if players are willing to pay attention to attack patterns and play smart. The boss design is especially impressive, with massive boss battles that are ever-changing, unpredictable and highly intense throughout the game’s nine Operations, in turn divided into two or three smaller missions each. Game director, Hideki Kamiya has a panache for outstanding, large-scale boss fights, particularly evidenced with Bayonetta, and it’s great to see that this talent has continued to extend to The Wonderful 101! 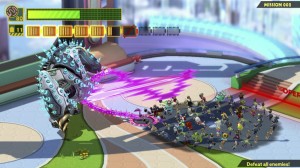 As impressive as all of this combat and enemy design is however, it’s still ruined by the game’s often shaky recognition of the shapes you draw. You have a huge variety of means to attack your enemies, between story-critical skills like the single-target-focused Unite Hand, crowd-controlling Unite Sword, long-range Unite Gun, armour-shredding Unite Whip, and even more Unite Morph attacks that can be purchased from Wonderful Mart! Unfortunately, when trying to draw with the right control stick especially, the game often confuses the straight lines necessary for Unite Sword and the squiggle needed for Unite Whip in particular. More ornate attacks are almost constantly mis-read as well, and in a game with hard-hitting enemies that is all about precision attacks, this is a big problem!

It’s a shame, because this is ultimately what holds The Wonderful 101 back from being the Wii U’s champion technological offering. It’s a gorgeous game with surprising detail and gloss in the colourful, hyper-stylized world, and the tongue-in-cheek soundtrack, complete with a dorky inspirational choir in several sections, is a real delight to listen to for fans of Japanese media especially! The game’s production values are some of the best that PlatinumGames has ever done to date, but the stark challenge combined with the fussy controls ultimately limit the game’s appeal to die-hard Nintendo gamers who own Wii U’s, and happen to harbour lots of patience.

At the very least, you can adjust the difficulty on the fly between missions, if at any point you find The Wonderful 101 to be too difficult, or perhaps too easy if you’re a PlatinumGames regular. That’s very much appreciated! This feature will likely prevent players from hitting a wall while trying to proceed the story, though we recommend that even experienced gamers at least start out on the Easy setting, as Normal is quite brutal for a first play-through. There may not even be any shame in dialing things down to Very Easy difficulty to start, at least until you get used to the quirky play mechanics. 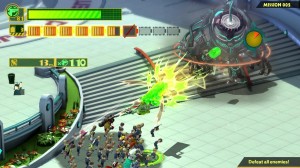 Don’t get us wrong, The Wonderful 101 is a very fun and enjoyable game when you learn to adapt to it, but it has an aftertaste of disappointment, as we were so passionately hoping that it would deliver on its promise of being a killer app for the Wii U technology. It falls short of that pedigree, but if you’re up to the challenge, you’ll still enjoy all of the goofy mischief and cartoony mayhem that The Wonderful 101 has to offer, so long as you don’t mind getting clobbered the first several times against some of the more vicious bosses and intense missions!

This debut effort is merely ‘good’ rather than ‘wonderful’, but we’re pulling for Kamiya and PlatinumGames to make a sequel sometime in the future. Maybe then, the Wii U will be blessed with the heroes it has always deserved!