It’s finally in our hands. Sony’s new next-gen prizefighter in the boxing ring of the new console era.

Seemingly destined for glory and unyielding consumer satisfaction right from the start, the PS4 has seen no end of praise from gamers and the media alike since its February unveiling, between so much pre-release coverage and surprisingly adorable musical ad campaigning. Now that the console is publicly available however, one has to ask the million-dollar question; Does it live up to all of that promise?

We’ve spent days unboxing, setting up, fiddling, tweaking, experimenting and generally picking apart every last iota of the PS4’s functionality, and finally we have our verdict on the console. Seeing as the PS4 is a very intricate, multi-functional machine with a lot to offer gamers however, we’ll be doing this review a little bit differently than our usual batch of game reviews, as reviewing a console is a very different process than reviewing a game.

Specifically, we’ll address the various separate features of the PS4, go over our experience with them, and comment on whether they’re appealing and are likely to live up to players’ expectations, before culminating in our concluding statement about whether or not the PS4 is worth tracking down for launch. This will help us provide the most in-depth and informative coverage on the console, without leaving out critical parts of your prospective $399.99 investment that may be important to factor into your decision.

This starts of course with the very first thing you’ll encounter:

As you remove the extra packaging and open up your new PS4, you’ll find the contents that Sony promised: The new Dual Shock 4 controller, the micro-USB cord necessary to charge the controller, a power cord, an HDMI cord, user manuals, some trial vouchers for thirty free days of both Music Unlimited and PlayStation Plus, a mono chat headset for voice commands and online communication, and of course, the console itself.

The PS4 has the same slight nuisance that the PS3 does, in that its internal power supply means that it comes with a brick-less, albeit rather short power cord compared to competing consoles. You may need to position the console in a very particular place so that it can reach your wall outlet or power bar. At least the HDMI cable is pretty decently-sized, and at least you’re not stuck with standard-def cables like you are in the PS3 box, but why does Sony make such short power cords for their PlayStation consoles? 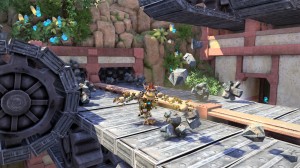 Worse however is that the power ‘button’ is a little bit difficult to find on the PS4, as it’s a very tiny sliver in the middle of the machine that you’ll probably have trouble locating at first. Also, you don’t ‘push it’, you have to hold your finger over it, like the launch model PS3’s power switch. The Quick Start guide does point out the location of the power switch on the PS4, but if you’re not familiar with electronics, you’re going to have no idea how to turn this thing on. Why scrunch a micro-sized power sliver in the middle of what’s otherwise a very sleek, aesthetically presentable machine? It’s the only element of the PS4 setup that feels unfriendly and kind of sloppy, at least for less than hardcore PlayStation users.

Fortunately, once you do get the console plugged in and turned on, everything is very simple and user-friendly. Like the PS3, you just list your country, your spoken language, set up your internet options, be they local or wireless, and either import your PlayStation Network ID from your PS3/Vita, make a new one, or skip making a PSN ID entirely to start. All of it is very simple and very easy.

Even before you perform initial setup and plug everything in, more avid gamers will probably want to inspect the console build itself, and naturally, that’s what we did before proceeding further.

One thing that will definitely surprise you is how astonishingly compact and weightless the PS4 is. It’s only barely bigger than the Super Slim PS3, is remarkably light and easy to transport even under one arm, and has a very sleek, polished finish that makes it feel very cutting-edge.

This feeling is further enhanced by the slanted hardware build, which is quite unlike any console to come before, giving the PS4 a very unique style compared to other gaming consoles. It’s built well enough that you won’t get the constant feeling that it’s flimsy, temperamental and could break at any moment, a fear so prevalent with the launch model Xbox 360 for example, and yet, the PS4 is certainly not the bulky, over-engineered monster that the launch model PS3 was either!

As a work of hardware engineering, the PS4 is both novel and ingenious! As cheesy as it sounds, the console truly looks and feels like a work of art when you hold it and examine it! It’s so compact, friendly and easy to carry around, and yet, it’s reliable and sturdy. We still wouldn’t recommend tossing it down a flight of stairs, but this has to be one of the most impressively-built launch model consoles that we’ve ever seen, needlessly tiny power and eject switches notwithstanding. 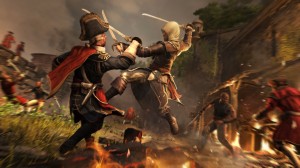 Every outlet is easy to locate on the hardware as well. You have clearly-placed USB outlets on the front and back of the PS4, a clear place to plug the PS4 Camera in, and plenty of cooling vents with a virtually silent fan that makes the console well-optimized for living room conditions, as Sony promised. Again, we wouldn’t chance putting the console into a cramped shelf, as it still needs proper air circulation to stay quiet and cool, but that should be common sense to longtime console gamers.

Replacing the Cross Media Bar menu of the PS3 is the new ‘PlayStation Dynamic Menu’, an all-new new hub menu that’s custom-built for the PS4. You can navigate the menu with the Dual Shock 4 controller, or, if you plug in a headset, or the PS4 Camera that‘s sold separately, you can activate certain options by issuing voice commands, a la Microsoft’s competing Kinect sensor on the Xbox 360 and Xbox One. Most people will probably just use the controller however, as the PlayStation Dynamic Menu is very simple to navigate, and the user guides don’t seem to give a clear idea of the potential and limitations available from the voice commands. Frankly, the voice commands feel a bit tacked-on and unnecessary at this point.

The menu is divided into two ‘tiers’, with the upper tier being for console-specific functions like the system settings, friends list, notifications, PlayStation Store icon and such, and the lower tier being reserved for media and software, showing the game library, Music Unlimited, Video Unlimited and the internet browser, occasionally opening into a third tier for things like DLC purchase options for your game library, and media apps such as Netflix. 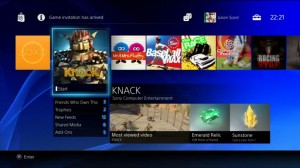 It’s disappointing that this new hub menu doesn’t support Dynamic Themes like the PS3 does, but the calming blue hue and serene tone give a sense of both immersion and relaxation, so that’s not a huge loss in the end. The new hub menu is very comfortable and accessible for gamers, and even for those who may never have touched a PlayStation device before. Thus, it won’t be long before you adjust to using it.