Nintendo has this fascination with releasing party games. In the case of Wii Party U, we can’t really complain.

Everything in Wii Party U is, as you might expect, presented in 1080p with only a few games letter boxing to maintain aspect ratio. Animations and physics are much more realistic and smoother than the original game, though considering its release was over three years ago and on a previous generation platform, we’re not shocked. Graphics aren’t what you came to Wii Party U for, though, so let’s get right into it.

Wii Party U is broken down into three modes: TV Party, House Party, and GamePad Party.

TV Party is a mode where players play around the television. GamePad island in TV party mode is a mode where players take turns moving around a game board and the first person to the finish wins. Mini games are used to determine how many spaces your character moves move, among other things.  This mode is similar to what you might expect from Mario Party; players progress around a virtual board to win the game. These are, of course, mere examples of the games in TV Party, a mode that is at its finest when enjoyed with others that do not want to move around the room too much but aren’t so lazy as to avoid picking up a Wii Remote in the first place. 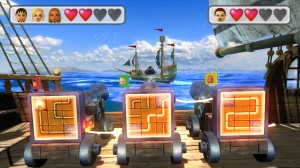 House Party mode focuses gaming around the people you play with as well as your environment. There are many unique titles here, including a game that somewhat mimics the classic party game Twister, and another that forces players to make a funny face and have others guess what you were showing using the GamePad’s camera. Others still, such as Water Runners require much more space for players to get active in. The Gamepad stays stationery and acts as a communal water jug while players have to quickly but steadily fill their Wii Remotes with water and walk it back to fill their jug first. It’s remarkably simple yet breathtakingly devious and one of the better games in the collection. In all, House Party mode will offers what most Wii games promised and few delivered: an active, meaningful use of the space around your living room as a gaming arena. Sadly, even fewer Wii U titles deliver on this promise, the GamePad being as big and stationary as it is.

GamePad Party consists of mini games focused on two-player fun using the GamePad as a sort of tablet. It’s a great mode if you want to go head-to-head against a friend (or enemy), though its validity in the world of tablets and smartphones could come into question. The best games in this mode were Tabletop Football, Tabletop Baseball, and Tabletop Gauntlet. The success of these games comes from ignoring the television and focusing on close-quarters play with a friend. Each friend grabs an analog stick and controls their side of the game. Some games are simpler than others, but a player’s competitive nature is most likely to come out in this mode, especially if it’s a sibling or close-friend rivalry. 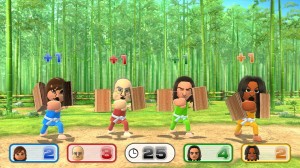 One of our favourite Nintendo features in any game (of all time – seriously), is the ability to rate each mini game when you’ve completed it. That vote gets sent to Nintendo so they can see what games people are enjoying and which they’re absolutely sick of. It makes us think that maybe they’ve got a better handle on this online thing after all. Then again, maybe not.

Wii Party U is an incredible value at considering the $50 package comes with a $45 Wii Remote. Even if you have no intention of playing the game, it might not be a bad buy considering everyone needs a party game or two lying around the house, so if you were planning on picking up a Wii Remote, pick up Wii Party U instead. The game also comes with a special GamePad stand, which clips to helps keep it horizontal on a table. It’s use beyond the GamePad Party games in Wii Party U is probably (very) limited, but it’s still good to have.

As far as party games go, Wii Party U is a great game, especially if you regularly entertain friends.  The mini games feel more polished and have more substance than the short and quick ones found in Warioware titles which make this a much better experience when sharing it with others. Buyer beware, however: this is not Mario Party. Don’t expect to find anybody from the Mushroom Kingdom here. They’re all probably out. You know, in another castle. 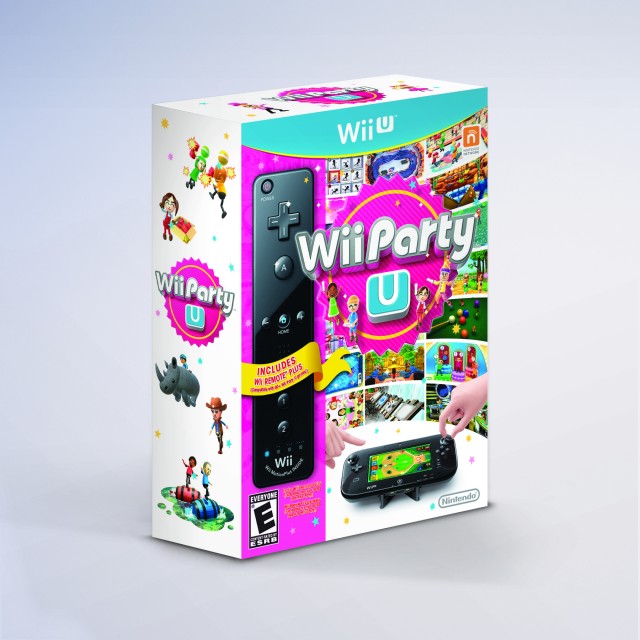