After a successful (and record-breaking) campaign on Kickstarter, Rob Thomas and company managed to gain enough backing and support from the fan community to fund the upcoming Veronica Mars film. Titled simply, Veronica Mars, the film is due in theatres for a wide release on March 14th of next year, almost exactly one year after the campaign went live. 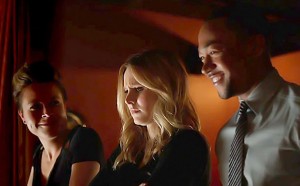 It also happens that Entertainment Weekly has the exclusive first-look at a minute-and-a-half scene from the film.

Apparently, Warner Bros., the film’s distributor decided that March 14th would be the date a long time ago. In a short interview with EW, series creator Rob Thomas also jested that “Luckily, no other teen detective movie decided to open in the middle of March.”

Thomas also comments on the scope of the film, saying, “There are smart ways to do a movie of this size — and we chose none of them … We are a low budget movie with big set pieces and 60 speaking roles. A murder mystery in a house would have been more cost effective. But I think we have managed to pull it off.”

The movie’s plot centres around Veronica (no spoiler there) who returns to Neptune, California, to help Logan, her ex-boyfriend, escape what we can only assume to be a false murder accusation. The movie also happens to take place a decade after the gang graduated, which makes it a great excuse to have a ten-year high school reunion and bring back in almost all of the original cast, not including the wonderful Amanda Seyfried. It might have been a bit hard to write her into the script, after all.

Be sure to check out the exclusive clip on EW.com, but before that, take a look at this awesome featurette from the the movie below.