Update: We’re happy to report that the Veronica Mars movie has been funded with a grand total of $5,702,153! That’s nearly three-times the funding amount that was requested, and hopefully a large enough amount for that car chase and nudity fund. It is also a relatively small budget for a film with stars like Kristen Bell and Enrico Colantoni, and one that will be distributed by Warner Bros. for a pretty wide release. The film will shoot this Summer for release sometime in Spring 2014. Stay tuned, marshmallows!

We couldn’t be more thrilled to report that the Veronica Mars movie project on Kickstarter has surpassed virtually every record ever held by anyone on the platform.

In addition to raising a bucketload of money, currently clocking in at about $5,560,000 with about five hours to go, the project was funded in the shortest amount of time of any project before it. 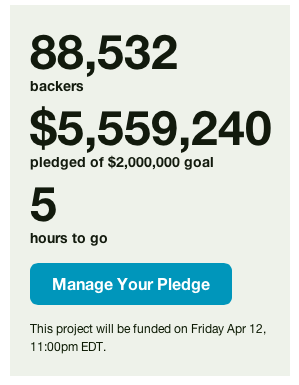 Additionally, Rob Thomas and Kristen Bell can claim they’ve got the most backers of any Kickstarter project in history, as over 88,000 people have contributed to the goal. The previous record holder was just under that number.

It’s also worth noting that it took about 16 hours to hit the first million dollars, another 28 days to climb to five million, but only another two days after that to hit $5.5 million. Incredible.

We love the updates Rob and Kristen have been consistently putting out. They’ve actually posted an amazing 23 updates, each with a fair amount of information. Some showed off the new t-shirt designs, others were videos from Kristen or Jason Dohring (Logan Echolls, for all you non-Mars fans), while a few were dedicated to explaining some new reward tiers that became available.

We’ll keep you posted on the status of the project as it continues to grow and let you know the final stats of the one and only Veronica Mars movie. Stay tuned!