Leading up to E3 2013, Nintendo told everyone that we would be treated to the next 3D Mario title, and the first of its kind on Wii U. When Super Mario 3D World was announced as that next entry, we were more than a little upset. See, Super Mario 3D Land was one of our favourite Nintendo 3DS games, designed perfectly for the handheld console. But that’s just it: it was designed for the handheld.

Having played the game in its entirety (and there’s a lot of entirety to be had here), our tone has shifted more than slightly. While not in the same echelon of Mario gaming as something like Super Mario Galaxy (and certainly not with Super Mario 64), Super Mario 3D World offers perhaps the best platforming and ridiculously fun gaming this side of the next-gen console wars.

There’s something to be said for Nintendo being able to keep a nearly three-decade old franchise fresh, even with multiple iterations within what appears to be the same universe. Of course, Mario has evolved over time, but where Nintendo has really excelled is at making a game more about visual style than it is about resolution. 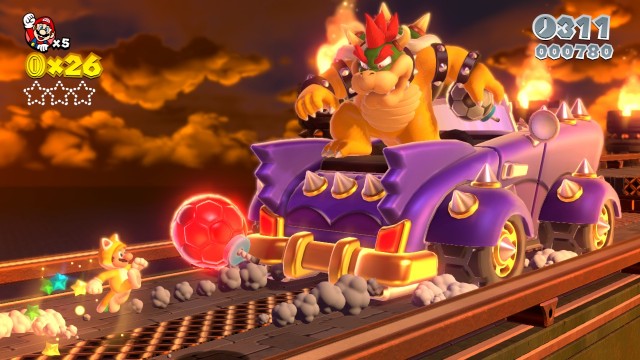 While Super Mario 3D World is native at 720p, it looks delicious on any full-1080p display. The colours are bright and vivid, contrast is high, and the little details the development team have added are what makes the game as beautiful as it is.

The worlds you traverse through here are the typical worlds you’ll find in virtually any other Mario title since the original. Expect sand, ice, water, and lava worlds, among others. However, the way they’re presented in 3D World will change your perspective on the usual Mario tropes. For example, the winter/ice world is no longer relegated to a slippery floor to make it unique. You can now throw snowballs at enemies, adding a different element to the gameplay, especially since Mario has rarely picked up anything other than a koopa shell lately.

Weather and richer lighting effects have made their way into 3D World, as have some cool effects such as a really neat use of neon lighting and strobe lights.

Everyone knows the Mario theme song. Chances are, you’ve inadvertently hummed or whistled it randomly throughout the day without realizing it was even from a video game. Then 3D World comes along and switches things up.

The classic Mario stuff is there, don’t fret, but rather than just updating the audio with some cool new renditions of the original songs, the music in 3D World has been completely redone with newer tunes as well. There are jazzy bits, as well as some slower melodies that make certain levels feel more moody than we’d ever expect in a title from this franchise.

Somehow, Nintendo manages to keep everything well within the Mario realm and all the notes tie together beautifully, keeping the audio themes consistent, while wildly different than what we’ve heard in a Mario title before, and that’s not easy to do with a storied franchise such as this.

So far in this review, we’ve mentioned “classic Mario stuff” and “within the Mario realm” and “usual Mario tropes”. It has become increasingly apparent over the years that Mario has become its own style of game unto itself. We wouldn’t say it defines the genre of platforming, if only because it is its own genre far and away from anything else on any platform.

What’s wonderful to see is a game that has such a storied history surprise the player over and over again. In Super Mario 3D World, level designs and puzzles have been so imaginatively crafted, the previous generation of Mario titles seem rudimentary in every sense of the word. Shadow levels are the first thing that come to mind: a game design choice that forces players to play through some levels only looking at the shadows they cast on the wall rather than the characters themselves. It’s a neat mind trick that will make you smile instantly.

Things we’ve seen before have also returned, like blowing into the microphone on the GamePad to lift or lower a series of platforms, but come back better and more accurate than they were before.

There is an abundance of new enemies in 3D World, far and away better than any we’ve seen before. There’s no shortage of goombas by any stretch, but there are also Ant Troopers and Blocksteppers and Parabones and Ty-Foos. (No, we didn’t make those names up). And each one of them is a wonderful treat to defeat. Blocksteppers, for example, travel in packs and like to ambush a question block that usually hides a significant item. Ty-Foos have no problem blowing you off a cliff, and they love the cold weather of World 3.

Perhaps the best part of the gameplay in Super Mario 3D World is that variety is the name of the game. At no point does the player spend too much time with a single style of gameplay nor fight the same enemy over and over. The challenge that Nintendo poses to the player is one of how to constantly rethink how you play the game as opposed to learning how to dominate in a single world before moving on to dominate the next. It also keeps the gameplay fresh and guarantees it doesn’t devolve into the recycled gameplay of games past.

This also lends to probably the least-predictable Mario title of all time. The world can shift perspective from third-person to side-scroling, to a vertical bird’s-eye view, to swimming, to crawling through a cave, and everything in between. There’s no one way to capture the visual look of the game, and that’s a real treat considering how easy it might seem to do so with a franchise like Mario. 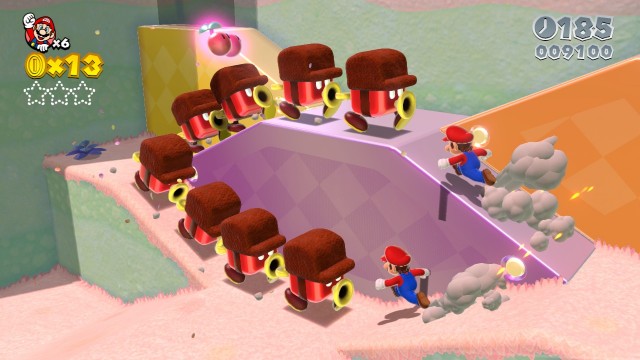 It even seems like some Zelda-style puzzle solving experience has moved over to Nintendo’s other princess-saving hero, as there are some honest-to-goodness puzzles at work in 3D World. A new item, the cherries, will double (or triple or quadruple) the number of Marios on screen, making it possible for each to hit a switch, which unlocks a star or other special ability.

Even castle bosses take this puzzle design to the next level. While the usual three-jumps-on-the-head is still the defacto way to get through a castle at the end of the world, the boss’s head might not always be in the same place. No longer are you just in a room where a big Koopa like Boom-Boom spins around until you bop him three times. Instead, you might be facing an odd square-shaped enemy called King Ka-Thunk that happens to have spikes and a moving head that tries to crush poor-ol’ Mario. Or Prince Bully, who gets sucked into vacuum pipes that compacts him like the garbage he is, only for Mario to kick him away. Coming off The Legend of Zelda: A Link Between Worlds, it was really neat to transfer some of the skills playing that game into this one.

The only elements in the game that haven’t really been changed are the ghost houses, which is especially a let down because of how well designed and challenging they were on Super Mario 3D Land for the 3DS.

We could be peeved that the game doesn’t ramp up difficulty until around the sixth world, or about halfway into the game, but that’s what we’ve come to know from these games. Once you factor in that it is nearly impossible to truly complete every level the first time through – that is, to collect every star and stamp – the replayability of 3D World becomes apparent and that much more joyous.

And no, we haven’t forgotten about Cat Mario. While we weren’t super excited about this rendition of everyone’s favourite plumber the first time we saw him, his abilities have certainly grown on us. In fact, he might just be one of the best Mario transformations to date. Cat Mario can climb up walls and other surfaces to reach previously inaccessible areas. What makes this great isn’t that levels get any easier, but that they actually become more challenging because you’re forced to rethink what looks like a wall and what is actually just an obstacle to a higher level, and one that might contain a star. It’s the first time we found ourselves frustrated (in the best way possible) with finding stars because we just kept forgetting to start climbing every wall in sight.

Really, this shouldn’t even be a section for a Mario game. Save the princess by going through world after world of enemies and bosses. However, it is worth noting that, while the storyline remains virtually unchanged, the way it is all presented more than makes up for the lack of diversity here. The story in the game won’t break any moulds by any stretch of the imagination, but it’s not exactly designed to. This is Mario, after all, and given how much has changed in this game, it’s nice to have that little bit of familiarity to tie everything together.

It’s difficult to imagine a better playing Mario game from a variety standpoint. By far the most well-balanced game of the franchise, Super Mario 3D World is a Mario for the next generation.