2013 may have paved the way for a return to the JRPG genre, but 2014 is taking that to a whole new level. For years now, JRPGs have slowly lost momentum in North America and dropped from the limelight in favour of other, more popular, genres. Even the most hardcore JRPG fans began losing hope, despite the occasional heavy hitter.

However now this niche genre is coming back with a vengeance, and is taking the world by storm. Why such an influx in the JRPG? It’s hard to say, but it just goes to show how strong the interest is for the seemingly struggling genre. The golden age of JRPGs may finally be making its return.

Here are some of the many titles coming out in North America this year. If there’s a game you don’t see (Final Fantasy XV, Persona 5, Persona Q, Kingdom Hearts 3, Shin Megami Tensei X Fire Emblem, Monolith Software’s X, Ni No Kuni 2, Tales of Zestiria, among others) it’s because either the games are still rumoured, haven’t been announced in North America or they probably won’t be released until 2015 given the rumoured release dates in Japan.

Alright, let’s get right to it. Don’t forget to let me know what JRPGs you’re most excited about in the comments below:

If you’re feeling nostalgic, Bravely Default might be just the game for you. Featuring a turn-based job system (much like in Final Fantasy V or Final Fantasy: The 4 Heroes of Light), Bravely Default goes back to its JRPG roots and is arguably one of the finest games on the 3DS yet. With the demo released earlier this month, Bravely Default is gearing up to be quite the game, and serves as a reminder that the classic turn-based battle system we knew and loved is anything but dead.

An HD remake of the classic Tales of Symphonia and its follow-up Tales of Symphonia: Dawn of the New World, Tales of Symphonia Chronicles is sure to be a memorable throwback for die hard fans. Arguably the best Tales of game in the series, you can’t deny that ToS paved the way for a new, refined direction. Without it, we might not have games like Tales of the Abyss, Vesperia, Graces f or Xillia. Whether you’re a budding or longtime fan, it’s about time you revisit the roots of this longtime series.

The follow-up to the much-loved Tales of Xillia, Tales of Xillia 2 is as much a continuation of the story as it is fan service. Taking place a year after ToX, the sequel once again features all the characters you knew and loved in the original along with some fresh new faces. While this may not be an original title, ToX 2 is looking better than ever and is proving to be an impressive new game in the series, sequel or not.

Yoko Taro, known for his unconventional take on the JRPG genre (note NieR or Drakengard), is back again with a prequel to the Drakengard series, Drakengard 3. Once again featuring a dark, complex story full of strange twists and turns, this game will feature the usual ground and aerial combat, but also introduces the power of song to manipulate magic in the world. Pair that with music by composer Keiichi Okabe (notable for his work on NieR), and you have yourself a beautifully haunting experience. 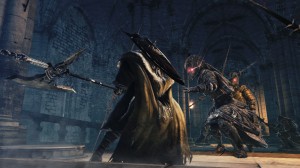 While it’s often debated whether Dark Souls or Demon’s Souls are technically JRPGs, I’m gonna go ahead and admit that I’ve always considered the series to be of that family (argue with me all you want). As the continuation of the widely popular and ruthlessly difficult Dark Souls, this sequel plunges you back into its dark, atmospheric world which will be twice the size of the original’s. While geared to be more accessible for newcomers, the complex, old school action-RPG combat is still there and is sure to offer hardcore fans plenty to talk about.

Following the release of Kingdom Hearts 1.5 HD Remix, 2.5 will feature KH2 Final Mix, Birth By Sleep Final Mix and KH Re:coded. While Re:coded is set to get the same treatment as 358/2 Days in the previous collection, this marks the first time the other two games will be available outside of Japan. Clearly a must-buy for any diehard Kingdom Hearts fan.

Similar to the Persona series, but maybe a little more strange (if that’s even possible), Conception II not only has you battling through labyrinths, you also need to balance relationships with the seven heroines in what they call “Classmating.” While the original Conception, Please Give Birth To My Child (take a guess why this wasn’t localized, I dare you), didn’t make it overseas, it’s nice to see bizarre games inch their way in every now and again. There’s a niche market for this kind of stuff, and Atlus delivered.

One of the finest examples in the Final Fantasy series, Final Fantasy X touched hearts with its intriguing story and colourful characters. As heart-breaking as its finale was, it gave way to so much more, igniting enough fan interest for a sequel. While very much fan service, X-2 provided something so unlike its predecessor, offering enriching gameplay in its own unique way. Much like Final Fantasy VII, X/X-2 branched forward the series yet again, further refining things in the process. Love them or hate them, it’s about time Square Enix does its fans a favour with this HD Remaster collection.

As the final game in the XIII universe, Lightning Returns features similar gameplay from the previous games while adding new content like more action based combat, an open world that’s free to navigate and a countdown time mechanic in which time elapses in real-time (think Majora’s Mask). It’s nice to see Square Enix attempt to change things up with this time management mechanic as, for many, this universe has become quite stale. Who knows what other surprises might be in store? Might be worth a look.

While a North American release date for Dragon Quest VII on the 3DS hasn’t been made, the chances are high that this popular series will make its return this year. Featuring the same turn-based gameplay, DQ VII does feature an extensive Class system allowing you to customize your characters in a variety of ways. A favourite among many DQ fans, it’s nice to see DQ VII get the remake it so deserves.

If you’re a fan of first-person dungeon crawlers like the Etrian Odyssey series you’re in for a treat with Demon Gaze. While simplistic in scope, the deep exploration and challenging combat is rewarding and addicting, offering hours upon hours of fun for all of you hardcore JRPG lovers out there.

Easily one of the best JRPGs on the PSP, Trails in the Sky won hearts with its simple, yet intriguing coming of age story, addicting gameplay and rich character development. While the continuation of this hidden gem, Second Chapter, won’t have a physical release, it’s a miracle to see localization finally become a reality. It’s taken 4 years for this moment to come, but it’s almost here!