UPDATE: While our review of Ryse: Son of Rome primarily focuses on the original Xbox One version of the game, we have updated the review with an additional section to provide impressions of the belated PC version.

Ryse: Son of Rome has had a long seven-year journey from conception, to announcement as ‘Project Kingdoms’, to a reveal as a Kinect game for Xbox 360, to a re-tooling, to silence, then to a second reveal as a revised Xbox One launch title, now played with the controller and limiting Kinect to a handful of in-game voice commands. It’s also one of the more ambitious new IP’s that Microsoft is attempting to add to their stable of exclusives with Xbox One, a slate that is getting noticeably better, though still trailing well behind Nintendo’s and Sony’s extensive lineup of big triple-A brands for now.

Speaking of Sony, it’s evident that Microsoft is attempting to position Ryse as a rival brand to Sony’s highly successful God of War franchise. The game aims to create the same brutal, gory hack-and-slash gameplay as God of War, except tweaking it to be more grounded and history-based over the stylized mythology focus of Sony’s series, swapping Greeks for Romans as well. It’s not a bad plan frankly, and it makes Ryse one of the more promising offerings in the Xbox One launch lineup, particularly packing its sky-high production values, complete with developer, Crytek’s next-gen CryEngine powering all of the spectacle! 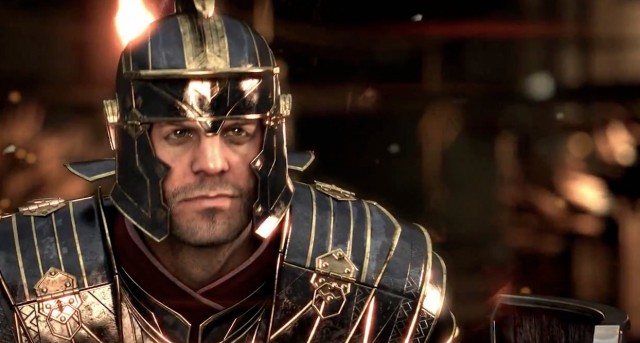 Thanks to this considerable ambition, Ryse sure does make for one superb display of what the Xbox One is capable of from launch. Unfortunately, its arduous development cycle is also very evident however, making a game that is just far more stilted, automated and boring than it should be.

Rather than effectively feeling like Microsoft’s answer to God of War, Ryse instead feels more like the Xbox One’s version of the PS4’s Knack. Like Knack, Ryse plays like a glorified tech demo that is all about showing off the new hardware’s technical capabilities, but at the expense of creating a gameplay experience that is actually compelling, rewarding and fun. Where Knack got frustrating however, Ryse just gets dull, especially given its alarming tendency to take control away from the player when it really shouldn’t.

Pair these issues with some slimy practices in the game’s current product, like it being released with a heavy chunk of its planned multiplayer features missing, on top of an absolutely shameless count of greedy microtransactions packed across an anemic six-hour single-player story, and you have a disappointing Xbox One launch title that really struggles to justify its current $60 price.

By far the best thing about Ryse are its graphics, which really are quite exceptional. Crytek’s CryEngine has always been a recognized benchmark for great triple-A graphics in games like the Crysis series and the original Far Cry, and it’s never been better than what’s on display with Ryse. The game is in fact so gorgeous that it’s perhaps one of the only Xbox One launch titles that appears to negate the technical advantage of the rival PS4, even being stuck at 720p resolution at this point.

There isn’t a single weak link in Ryse’s visuals, making it rival, and perhaps exceed Forza Motorsport 5 as the game to show to your friends when you really want to prove what the Xbox One can do that the Xbox 360 can’t. The character models are almost chillingly lifelike and detailed. The environments are vivid, dynamic and absolutely packed with atmospheric detail that firmly plants you in the period setting. The combat is visceral, bloody and powerful. Everything about Ryse’s graphics just sings, continuing to prove that Crytek remains one of the most ambitious developers in the industry when it comes to graphics!

The game moves with a lot of plodding, methodical weight, as does your player character, Marius Titus, so it’s certainly not shooting for 60fps on top of the spectacle it’s already achieved. That’s fine, since the hefty movement and navigation can lend itself quite well to making combat more brutal. Ryse may be a game that’s perhaps too plodding and methodical at times, to the point where the cinematic ambition overrides the actual gameplay experience, but there’s no denying that it’s a stunning achievement in next-gen console graphics.

Even in multiplayer, Ryse doesn’t see a lick of slowdown, or badly-defined textures, or other such issues that tend to show up in console launch titles. It moves along at its preferred pace, never compromising on polish, and never showing any discernable difference between pre-rendered cutscenes and actual in-game models and environments.

The squeamishly gruesome execution kills lose a bit of their novelty as the game goes on, even with the ability to gradually unlock more, since the stubborn commitment to realism means that there’s only so many ways that Marius and his enemies can animate without bending the laws of physics. By the third or fourth chapter of the story especially, kill animations will really start to repeat themselves. After all, the more astonishingly realistic a game looks, the more careful a developer has to be not to show cracks in the illusion.

Fortunately, Ryse stands as the game to beat for Xbox One launch visuals, not just mostly, but completely.