There is something to be said about deep, mature and challenging gaming experiences. Even so, there are times where even the most hardcore of gamers just need easygoing comfort food. Dependable brands that offer similar, accessible experiences between installments, but remain fun and engaging in their own right.

The now-iconic LEGO video games have served this purpose of just being good, cheeky fun better than most, offering a nice reprieve from the dark and intricate experiences often associated with the spare time of hardcore gamers. Kids, adults, casual players, hardcore players, and anyone in between can enjoy these games for their colourful LEGO worlds, sharp sense of humour, and naturally, a new spin on many characters and franchises we know and love. 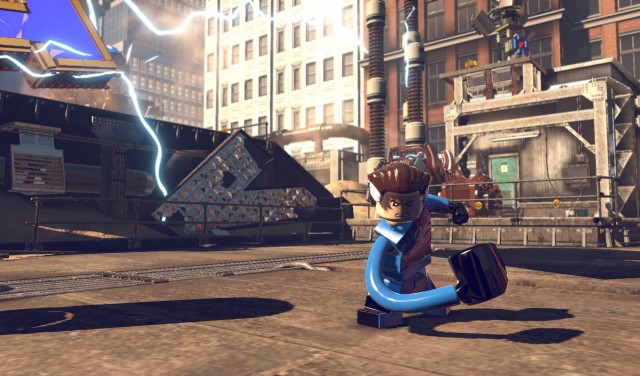 The LEGO games didn’t waste any time with the coming of the new console generation either, as their latest offering, LEGO Marvel Super Heroes, has not only launched for current consoles, handhelds and PC, but also for the brand new PS4 and Xbox One! That, paired with the seemingly impossible deal struck between Marvel holder, Disney and rival corporation, Warner Bros., who happen to own the competing DC Comics in its entirety, led to LEGO Marvel Super Heroes launching with far more fanfare than most of its siblings.

Better still is that the game stands with Wii U-exclusive LEGO City Undercover, also released last year, as being one of the best LEGO games to date, and a clear improvement over 2012’s previous licensed offering, the more middling LEGO The Lord of the Rings. LEGO Batman 2: DC Super Heroes is certainly a tough act to follow in the field of LEGO-izing beloved costumed crusaders, particularly with it also being one of the best LEGO games to date, but nonetheless, LEGO Marvel Super Heroes rises to the challenge, standing alongside its DC sister game by just being so incredibly, unapologetically fun, especially for avid fans of both Marvel’s comics and movies!

If you’re buying for a little kid who loves Marvel, or are a kid at heart yourself and crave a light-hearted superhero romp, LEGO Marvel Super Heroes is a wonderful dessert to go with the more complex sports sims, intense shooters and violent action games that pepper our triple-A game industry. This is especially true on PS4 and Xbox One, where it currently stands as one of the most recommendable family-friendly game options!

The LEGO game style is immediately distinct like few other products are. The distinct and colourful brick-built worlds and peg-like characters are immediately recognizable to just about anyone, and, naturally, LEGO Marvel Super Heroes does exactly what it advertises. It takes the beloved world of the Marvel Universe, established across both comics and movies, and re-imagines it in a cute, vibrant LEGO-built setting.

It’s been evident for a while that Warner Bros.’ DC Comics characters, particularly Batman, have gone with LEGO like bread and butter, not just in the game space, but even in the real world’s toy aisles. It’s little surprise then that LEGO game developer, TT Games has crafted personalities and locations from across the Marvel Universe with outstanding effect! The Marvel heroes look as cute as they are impressive in LEGO form, and seeing Marvel’s New York built from LEGO bricks even rivals the incredible realization of Gotham City as a LEGO piece in LEGO Batman 2: DC Super Heroes, particularly with a bright, sunny sky to enjoy the open world with this time! 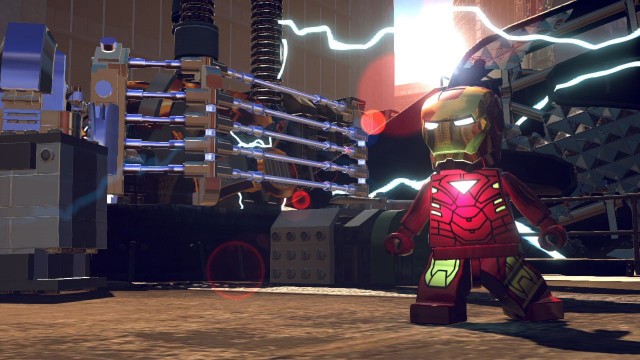 Of course, as much as the style of the LEGO games is always immediately endearing, it’s also true that these aren’t games built to floor players from a technical standpoint. The graphics are mainly about charm, along with the obvious appeal of successfully making beloved locations and characters recognizable even when built from LEGO. For what it’s worth, LEGO Marvel Super Heroes is one of the most ambitious and well-crafted LEGO games to date from a visual standpoint, but it also doesn’t provide any real upgrades from the same style that founds the graphics in every one of these games.

Obviously, you will notice a graphical bump, however small when playing on PS4 and Xbox One, and high-end PC settings for that matter. The PS4 and Xbox One versions of LEGO Marvel Super Heroes offer slightly better environmental detail and lighting definition over the last-gen consoles, and better yet, they also completely eliminate load times that are present on the other platforms.

On optimized settings, the PC version is also surprisingly high-end, able to effortlessly stand with the PS4 and Xbox One builds in terms of visuals and performance. Even then though, the visual difference over the last-gen console ports is barely noticeable beyond load times being gone. On lower PC settings, the game runs more akin to the Xbox 360 and PS3 versions of the game, loads and all.

In fact, LEGO Marvel Super Heroes seems chiefly designed for last-gen consoles most of all, even if the next-gen builds are slightly more bright and colourful, and never stop to load. The game is still one of the most visually impressive LEGO games to date on Xbox 360, PS3 and Wii U, and also seems to run a bit more stably on Xbox 360 and PS3 especially. The optimization for PS4 and Xbox One is occasionally more suspect, as the PS4 version crashes outright on occasion, and the Xbox One version suffers from some annoying framerate drops when the screen gets crowded. 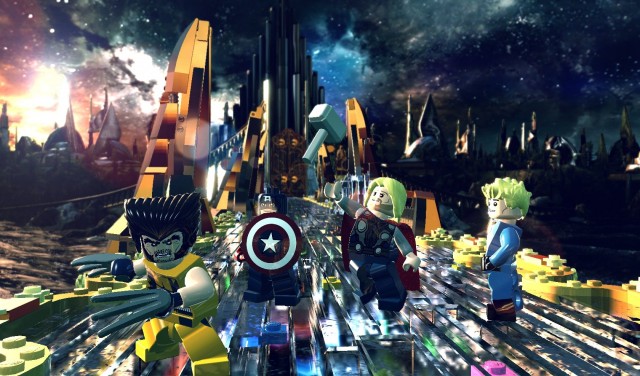 The Wii U version looks and performs pretty well identically to the Xbox 360 and PS3 versions, though that also means it doesn’t take a noticeable visual hit when you play on the Gamepad’s screen. You’ll also run into some framerate stutters on Wii U, though they’re less common, and not quite as severe as what the Xbox One version occasionally suffers from.

All in all however, regardless of your platform of choice, the outstanding presentation and reliable LEGO game charm are offered in spades throughout LEGO Marvel Super Heroes!

The soundtrack in LEGO Marvel Super Heroes is nothing special, particularly since it doesn’t have recognizable licensed movie tracks to draw from. Yes, unfortunately, if you were hoping for some Marvel movie tunes, you’re out of luck, as LEGO Marvel Super Heroes just uses original, and largely forgettable superhero game compositions. You have your bustling street song, your tense action song, your suspenseful cutscene song, etc..etc..

Of course, in this case, it may be inevitable that LEGO Marvel Super Heroes features no Marvel movie tunes. Warner Bros. may have incorporated famous movie songs like Danny Elfman’s Batman theme song and John Williams’ Superman: The Movie theme song in the LEGO Batman games, but, well, that’s not a problem. Warner Bros. owns the entire DC Universe, and owns those movies wholesale, including the soundtracks. They can put those songs in a LEGO game at the snap of a finger.

Marvel on the other hand has their movies tangled in a mess of rights issues, with Fox owning some characters and movies, and Sony owning some characters and movies, and Disney maintaining the rest, but under contingency from a Paramount agreement, and Universal in the case of The Hulk, etc.. The problem is quite evident, particularly with Warner Bros. owning DC, and having to really negotiate for Marvel rights without generating a conflict of interests.

So, bottom line, you won’t hear that awesome theme from The Avengers in the game. Too bad.

Fortunately, the sound effects seem to be designed to be more in line with the Marvel movies. Wolverine’s claws make virtually the same sound as Hugh Jackman’s movie portrayals, just as Spider-Man’s web shooters stick with the same distinct sound from the Sam Raimi movie trilogy. This is of course combined with the familiar brick-building and block-bashing sound effects in every LEGO game as well, and it all sounds as loveable as ever!

As with the more recent LEGO games, LEGO Marvel Super Heroes also features full voice acting from its characters, though, again, almost none from the movies unfortunately. The only exception is Clark Gregg continuing to voice Agent Coulson in the game, but that’s because it’s currently a golden rule at Marvel that Gregg always voices Coulson, even when he’s animated and in voiceover.

With that said, the other voice actors sound great, even if only some of them attempt to impersonate the actors from the movies. There aren’t any real weak links in the cast, even if it seems that some actors want to really play up their characters in a goofy way, while others are playing their personalities straight. It’s occasionally a bit of a tonal contrast, but it’s barely noticeable most of the time.

The game’s audio is generally pretty good all-around, though Nintendo gamers had best be advised that the Wii U version of LEGO Marvel Super Heroes contains a couple of unique audio bugs. There are times where audio clips will either play too quietly or too loudly, and during several key sequences, the sound mixing in the Wii U build just seems to be rather off in general. It’s not a game-breaking issue of course, but it is worthy of a heads-up if you prefer to play LEGO games on Nintendo consoles.

Next: Gameplay and Storyline